In the wake of Gary Clark Jr's recent performance on the coveted SNL stage, talent developer and music business writer Jesse Kirshbaum here takes a moment to reflect on why a powerful and iconic "real life guitar hero" like Clark Jr. still struggles to break into the mainstream of music.

Guest post by Jesse Kirshbaum of the Nue Agency

This weekend I had the privilege of seeing Gary Clark Jr. perform on SNL, one of the most coveted milestones for a musician. The SNL stage is not only historically iconic, it also feels more relevant than it’s been in a decade.
I first met Gary when he signed to Warner Brothers in 2013. Even though he is a low key guy, his vibe was contagious! I could immediately tell I liked him as a person, but it wasn’t until I saw him perform at Soho House a few days later that I truly grasped what he is capable of. 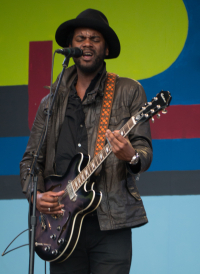 Gary is a modern-day “rock god.” He’s as gifted with his instrument as you can be, but he’s not relying solely on his guitar skills to get ahead. He is a mega-talent that stands for something. He’s remained relevant not only because of his ability but because he’s always gotten the right looks, in part because his manager, Scooter Weintraub, is a master. Still, until recently, that hadn’t translated into a broad audience.
Gary rocked SNL. Don Cheadle, the host, clearly had an affinity for him despite his own limitless gifts. Gary performed his new track, “Pearl Cadillac,” which dropped Friday. He also performed his new album’s title track, “The Land,” which we featured in the newsletter a few weeks back. It speaks to the current state of American affairs and reveals Gary’s strong POV. Gary is a rarity in that he has a message and major appeal.
So why isn’t Gary as big as he should be? We know “guitar music” doesn’t do as well on Spotify as other genres. His biggest track is “Bright Lights Big City,” an anthem for me personally, but one that benefited largely from being licensed by the NBA and remixed with a Nas feature. There’s no MTV, VH1, Fuse, Revolt or BET playing his videos, which would help convey his powerful message. And his sound doesn’t necessarily fit on mainstream radio in the current environment either.
What’s the spark that could help him cross over?
I rapped with my friend, music producer, DJ & aficionado Sean Glass, about this over the weekend. He sees it simply as “mindshare vs. market share.” Because of the systemic hurdles to a broader audience that Gary faces, he can either collaborate with more artists and position himself to pull their audiences in (mindshare) or attempt to ‘blur the lanes’ and move into ancillary markets (market share). The former might mean more hip-hop heads fuck with him (little known fact: Gary can rap!) while the latter might mean a greater emphasis on merchandise, film, TV, IP and tech to grow his brand.
At the end of the day, the path has to fit with Gary’s identity. And all that said, the Gary Clark Jr. live experience is so bonkers that, frankly, he’ll never be at risk of falling off. I’m just dying to see one of the greatest rock and soul musicians of our generation appreciated the way I believe he deserves to be. With a milestone show this weekend and a new album dropping next week, maybe his time is coming sooner than later.

Jesse Kirshbaum has been in the trenches of the music business for over a decade. He started his career finding and developing talent. In fact, he worked with some of the biggest and most relevant artists of modern times. Jesse as extensive experience securing talent for concerts, tours and endorsement deals for his various clients and brand partners internationally. The same way he is known for helping break artists, he now focuses on building robust strategies and campaigns for big & emerging brands that wish to breaking into the mainstream zeitgeist.  He founded Nue Agency (a creative boutique, recently named to Inc Mag's 500 list as the 3rd fastest growing Media Company in America) to sit at the center of culture, brands and technology. He is the host of Hot 97’s web series “Hot In Tech” and is an authority in music tech culture, as well as the executive producer of the hit digital series #crwn.  Jesse writes and curates a Beats and Bytes, one of the best weekly newsletters in entertainment.