From agents to artists and tour buses to trucks, Pollstar Live! is the gathering of the tribe for the touring industry. This was the first year that new grand poobah Ray Wadell and the Oak View Group were in charge, and they left their stamp in nothing but positive ways. Hypebot and our sister company, the Skyline Artists Agency were there. But so was Kosha Dillz, and this man knows how to work a room. 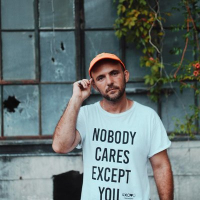 I met a bunch of people at Pollstar convention.. Being that it is the most  useful and influential  conference you should attend to ( besides the fact that the Grammys happened just days earlier and SXSW is next month)   I want to share with you some of the coolest people that I met. These people are the ones that  do all the work behind closed doors through out the  year while your favorite artist preps in the studio to get out there in front of all the fans. Meet some of the players and write these names down. These are all the cool people I met and some of the cool stuff they do and one day they will be even bigger than they are now.

1.  Boris and Rob from See tickets

The CEO of American ticketing came to sling tickets. They do millions in the UK including the legendary Glastonbury Festival. Once I heard that I was like Oh Shit.  They also do festivals in the USA and even thought he has the name Boris, he is French! His boss man Rob was right next to him ordering drinks, and I came in to save the day by ordering in Spanish. It was certainly a bro-down afterwards.

From dallas, this guy is one of the dudes behind the Capital One house at Antone’s in Austin Texas for SXSW.  They do sweet brand partnerships that crush and have big bands play. Ex shop is the place where all the ex agents left to do experiential marketing. I guess in a world of agents, people think about doing cool stuff.

They had a booth a big color purple  and makes this booking and venue management software that helps you get stuff done way more efficiently than spread sheets and napkins and google calendars. They are already in over 500 venues around the world  and after pollstar they should probably have another hundred.  Also , stop by Empire Control Room and  Garage at SXSW because they own that and the parish and the Main

Not many of you know that after being sober for 14.5 years I still go to all those 12 step meetings, and Musicares is one of the big places to help that on tour, including vans Warped Tour (hi mike!) Have a employee at your company that got injured and doesn’t have insurance. People like musicales can help. Need to go to rehab or know someone else?? Someone can help.

Not only is she OG Roxy in Hollywood , she runs the booking at the Mayfair Hotel in Los Angeles and works with Regime who also does Matisyahu Management, DJ Muggs, Evidence, Common Kings and other cool stuff. They also have the Empire Agency.

These guys went rogue like me, but they are no stranger to what they do in concerts. If you go to the North west area look them up. I played the Domino Room with them in Bend, but they also 7 cities within Wshington and Idaho markets with everything from Hip Hop to metal.

Meeting this guy got me so excited. I immediately showed him my ears and told him how I  I can’t imagine that on some level, I can sign up to fight someone and literally get beaten for a specific amount of cash. This isn’t as big as the UFC, but he basically tours casinos of 1500-2500 size and fills seats with locals who fight and gets scouted by pros. Fighting is a big business. Just imagine all the rappers that pretend like they want to fight each other as amateurs. We chatted about the fight in the UK (with head gear) that drew 17,000 people for two Youtube stars. If you know someone who wants to fight and is good, it might make sense to hit him up. Wfcfights.com. Legit!!

Met this guy in the lobby showing us an app on how to revolutionize the way of sharing music through multiple spaces in clips.  It is in beta testing mode but has some big names and he’ll probably sell the things for millions of dollars. It was too good to be true. He showed it to Dave Grohl but Dave has to put his glasses on and couldn’t see what he is doing but YG and Tyga seem to like it.

Lots of agents were in the building but I specifically met this man in his first time in Los Angeles. You can certainly tell a NYC agent when you see one, who was here alongside George Clinton when he spoke on his panel.  UAA reps a lot of cool tours and Jon specifically was influential in locking me in for 40 warped tour dates in 2015 with Kevin Lyman, who also spoke on a panel about the legacy of Vans Warped Tour. UAA has been around since like…World War II!! That says something in regards to longevity.

One of the coolest people I met, I ended up randomly speaking spanish with my new Argentinian friend that rocks out in Portland. Not only do they throw sick shows, but they have a cool person doing it which means you probably want to meet her.  They also do Lola’s Room, which is a 300 cap.

Kevin doesn’t need an introduction but of course everyone wants to know what he is doing. This year on March 1, warped tour will announce the line up for their 25th anniversary dates. Be ready for it to break the internet. Atlantic City gets two while the Bay Area gets another 2, and Cleveland will also have its shot for the Rock n Roll Hall of Fame. As we shift into a world of destination festivals, Warped Tour is def a place that will never lose its fan base and always sell out. It sold out  nearly 10 shows last year so I’m sure it will sell out all weekend this year and Kevin will enjoy his summer.

12. Some guy with the last name Rooney – LA Coliseum.

I can’t recall who he is by first name, but I literally met the guy that acquires business for the Coliseum in Los Angeles, which is a 70,000 cap room. Basically when you use words that big, you are the the same thing as all the other talent buyers but your “room” is 70,000 people. I told him I rap outside there sometimes and I’ll probably see him there.

13. Josh Rittenhouse of APA – This dude is the man and the hip hop guy who once booked openers for Wu Tang in the middle of Pennsylvania but is now responsible for lots of the Lil Xan touring success and other sold out tours. Anytime I am some prestigious thing in rap, Josh appears there, because he usually put the show together.
14. Chase Edwards of Universal Attractions – Briefly met the man who put me on a sweet tour this past January with Nappy Roots in the mountains of Colorado. This dude also reps Devin the Dude, who is a pretty cool dude, making Chase be the dude to contact to make a show with Devin The Dude happen (that is a lot of dudes right there).
15. Deuterman of Ineffable Music  (Florida edition)
If you want to play 8-10 markets in Florida, Deuterman is the man to talk to. This guy really got it rocking out there and I was once intro'ed to him at the One Love Festival by Ballyhoo! Howie, the lead singer of Ballyhoo! , mentioned to me that this is the person you need to know in Florida. I already know a few rabbis and a few rehabs there, but now I know that if I want to play shows…I'm gonna call Deuterman.
16. Jon Phillips of Silverback and the lead singer of Roots of Creation
There aren't many legends that hang out on a frequent basis but Jon Phillips was certainly there. He was one of the key people in Sublime's career and is also handling his son Brad (LAW), while Silverback and also runs the ship for Dumpstaphunk and Slightly Stoopid,  who are coming off their successful December destination festival in Mexico. He was with a really dope band called Roots of Creation, that tours like mad men all across America and a sweet album called Grateful Dub.
extra credit: Rick Farrell aka Ricky For Real – The awesome booking agent with a hat on and a mustache from ICM that represents Jeff Goldblum, who I randomly rapped for on camera at the Sundance Film Festival. This dude Ricky really knows music, so it is cool to see him hang with all the hip hop homies at ICM while he dabbles in the adult jazz world!

Kosha Dillz is an awesome rapper and creator living in Korea Town Los Angeles, although he was born in NJ. He curates two SXSW showcases (one called OY VEY and one called CMMNTY) and played on Vans Warped Tour all last summer. He recently opened up for MGK at Sundance Film Festival and also performed at the 61st Grammys. If you wanna holler at him, drop a line to rapperfriends@gmail.com.

Bruce Houghton on 02/18/2019 in Conventions & Awards | Permalink | Comments (0)
Share on:
Top
Follow Us on Daily Summary Subscription
Advertise on Hypebot