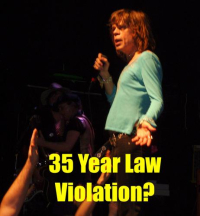 Historically, record labels have made every effort too keep as much revenue as they could for themselves, and paid artist the minimum amount possible, but as the music industry has shifted, many had hoped this practice would lessened. This is not so, at least according to five artists bringing down the litigation hammer on industry majors Sony Music and Universal.

Record labels have always done whatever they could to keep as much money as possible and limit what they paid to artists. Back in the day of the music entrepreneur/label owner this was expected, but as the music business is fairly corporate now, you’d think those days would be over. Not so, according to 5 artists that are suing both Sony Music and Universal Music for copyright infringement.

Singer/songerwriter David Johansen, best known as a member of the New York Dolls and as Buster Poindexter; John Lyon, known as Southside Johnny (from my old stomping grounds of Asbury Park, NJ); and Paul Collins who performed as Paul Collins’ Beat, are suing Sony Music for violating Section 203 of the Copyright Act, more commonly known as the “35 year law.”

This provision states that an artist can take back the copyright on his or her works 35 years from the release of the album, as long as the record label is given sufficient notice. Any agreements between the two parties that still exist concerning the album are also terminated when this happens.

The plaintiffs claim that Sony and Universal have refused to allow the recording artists to take back ownership and control of their U.S. copyrights even after they have sent the necessary Notices of Termination to those companies.

While it might be easy to think that this provision caught the labels by surprise and their business affairs offices weren’t able to fit these cases into their already overloaded schedules, the fact of the matter is that the labels have known this was coming for some time and have been dealing with it with other artists for a few years already.

In the old days of record sales the labels would have given control of these albums back a long time ago, but with the advent of streaming music, everything in the catalog is valuable because it continues to make money. Now it becomes a copyright infringement case.

It should be interest to see how both Sony and Universal play this.