Are YOU A Male Ally To Women In The Music Business?

As more allegations of predatory behavior by men in the music business continue to emerge, Chris Robley shares a recent open letter from Joe Crookston to the Arts and Music Community, encouraging men in the music industry to make a commitment to act as true allies to women in the business.

Signers of “The Declaration of Male Voices” publicly commit to being an ALLY TO WOMEN who work in the arts and music business.

I spent last week in Montréal for Folk Alliance International, a music conference where thousands of musicians and industry people squeeze into a hotel, showcase their songs, book shows, and find solutions. 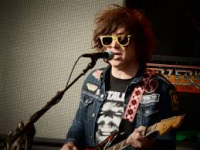 As reports of Ryan Adams’ alleged predatory behavior surfaced out there in the world, inside the tightly-knit folk community something similar was happening. A small group of women were coming forward with stories of abuse and manipulation, calling out the perpetrator, supporting one another, and shining a light. (To be clear, I don’t believe any of this absue was happening at Folk Alliance — but within the community it serves).

I thought about how I can move through hotel hallways, a crowd, a life, in relative safety. I can take for granted that a compliment is a compliment. That an opportunity is an opportunity. I thought of writing about it. But yesterday another folk singer said it better than I could, asking that men step up and sign a pledge to be part of the solution and not the problem.

If you’re a male musician, I’d encourage you to read Joe Crookston’s letter below, see the pledge, and sign the declaration.

Will signing a declaration of intent change the world? No. But it’s a way of putting ourselves on notice; it’s a promise to ourselves and others that we’ll act as real allies of the women in our music scenes.

This is Joe Crookston writing to you from my studio in Ithaca, NY.

This last year, as we know, has been a nonstop tumble of sexual misconduct, manipulation and abuse of power by MEN over WOMEN in our performing arts industry. From Ryan Adams and Harvey Weinstein to Mark Panick and Bloodshot Records to Ian Fitzgerald who was recently called out at the Folk Alliance Conference for years of abusive behavior towards women.

As a man, and as a performer in our community, I feel it is important to share my perspective and offer a few points in defense of these men and to explain why women should give them the benefit of the doubt. Here they are: 1.

I couldn’t think of any.

BECAUSE THERE IS ABSOLUTELY NO FUCKING DEFENSE OF THE ACTIONS OF THESE MEN.

The actions of these men (and thousands others) are WRONG.

They are wrong and they need to stop. PERIOD.

The dominating, predatory, and coercive sexual behavior that is rampant (yet silent from lack of accountability) in our culture needs to stop. PERIOD.

MEN, it is our time to step up our game.

MEN, It is our time to acknowledge that for decades we have run the show. We have gained access to multitudes of opportunities while simultaneously, women were kept on the sidelines.

Men, we have been given performance opportunities based on our musical and artistic skills and not for how much skin we are willing to show.

We are rarely, if ever invited to perform at someone’s home, only to find out there was a creepy ulterior motives for the “after show party.”

We men feel pretty damn certain that no one will comment on (or rub) our ass as we lean forward to load the van.

MEN, it is our time to be strong, unwavering and dedicated ALLIES to WOMEN in our performing arts community. WE MUST DO THIS.

It is our time to set a new standard within our brotherhood, and to recognize, acknowledge, and admit that when women are hurt, sidelined, disrespected, constantly sexualized, abused, condescended to, and positioned below us, the great potential and creative power of our arts community suffers greatly, and we all lose.

I recently attended the Folk Alliance International Conference in Montreal with 4000 other industry members. 5 days (and very late nights) of roaming the hotel hallways showcasing music in hopes of moving my career to a new level. At 3am. I felt safe. I got handed business cards and offers for gigs in New Zealand. I felt safe. I trusted these offers were about my music and art and not about my body, or power. I felt safe.

I wanted more than anything for EVERY SINGLE woman artist at the conference to feel as safe as I did. I wanted my friend Emily Mure to feel that when a man approached her with a gig offer, it did not come with creepy strings attached. I wanted her to be seen for the creative person she is. I wanted my friend Alice Howe to be able to safely navigate her growing career without men imposing their ideas of how she should do it. I wanted EVERY woman at the conference to feel respected and approached with human dignity, just as they should.

I had a strong urge to go up and down the hallway at the conference, walk up to my men peers and ask them if they would agree to treat the women artists in the hallway with respect and with clear intent. I wanted to encourage them not violate their women peers for coercive, career, narcissistic or sexual reasons. I wanted to write words on a napkin, like some kind of DECLARATION OF BEING AN ALLY TO WOMEN and walk up and down the hallway and gather signatures from the men. I wanted my women peers to feel safe.

I drove back to Ithaca, NY after the conference and I kept thinking about the Ryan Adams bullshit, and the napkin. The Declaration. A declaration that MEN would sign to agree and commit to being an ally to women.

Within seven minutes I was writing the first draft of THE DECLARATION OF MALE VOICES. For the rest of the day, I furiously went back and forth honing, editing, refining the wording. I wanted to get it right.

I then texted drafts to many women in our music community who I knew would give clear, strong, precise feedback. AND YES they did. Carrie Elkin, Melissa Greener, My sister Andrea, Amy Kucharik, Alice Howe, Emily Mure, Kathryn Caldwell, Courtney Rodland. My daughter Josie. They honed and shaped it with clear feedback.

By the end of the day THE DECLARATION OF MALE VOICES was written. It is a declaration that will be stated and then publicly signed by men throughout our arts community, agreeing to be an ALLY TO WOMEN.

I knew we needed a digital “napkin,” for 1000 male performers, agents, presenters, DJ’s and filmmakers to sign their name. We needed a simple website. I called my friends Ethan Baird and Jake Bush. Together we created a website called: WWW.MALEALLY.COM

Jake, Ethan, and I pulled this together in three days, but it’s been 100 years in the making.

MALE ALLY Is a site for gathering 100. 1000. (1 million) names of men who are publicly agreeing to be an ALLY TO WOMEN in our community.

MEN. Performers, Agents, DJ’s, Label Owners, Presenters, I am looking at you.

Will you go to www.maleally.com and sign the declaration? You have to.

I’m making MALE ALLY stickers, t-shirts, and artwork. There will be lots of opportunities to get involved and spread the word, and yes, If you care about safety and dignity of women,

The Declaration of Male Voices

I am an artist, musician, songwriter, filmmaker, agent, label owner or presenter who is part of the larger performing arts industry.

I am declaring myself an ally to women

in the arts industry.

I believe FEMALE VOICES must be

heard and experienced equally to mine.​

I believe women’s art must be presented and showcased with the same intention, clarity, and dignity as that of my male counterparts.​

I am signing on as a MALE ALLY to be proactive and to help create a safe place for women’s physical and emotional safety.  Ipledge to support women to thrive as artists based on their work.

I AM SIGNING ON TO BE A MALE ALLY TO WOMEN.

In strength and solidarity.

Chris Robley is the Editor of CD Baby's DIY Musician Blog. I write Beatlesque indie-pop songs that've been praised by No Depression, KCRW, The LA Times, & others. My poems have appeared in Poetry Magazine, Prairie Schooner, The Poetry Review, & more. I live in Maine and like peanut butter chocolate chip cookies, a little too much.