In this important piece of marketing advice, Jake Udell expands on his theory that the most important marketing an artist can do is to their core fans, and the value of investing time and money in quality content, rather than trying to reach as many listeners as possible.

Guest post by Jake Udell of Art of Manager

If you market artists, this is one of the most important posts I will write all year.

Earlier this week, Amber Horsburgh (one of my favorite music marketers) published an article claiming “marketing to folks who haven’t heard you are most profitable”.

The article highlights why the music industry should focus their marketing efforts on reaching new fans and not just speaking to an artist’s core fanbase.

If you’ve been an avid reader of this blog, you know I believe the most important thing an artist can do is cater to your core fans.

In today’s world of community building, I believe if the core is always kept satiated, over time they will grow themselves by spreading the artist’s content for you, eventually leading to the moments of mass engagement capable of propelling superstardom.

Amber’s article references Spotify data she collected stating the bigger the artist (monthly listeners), the higher proportion of those listeners are fans.

The point she is making is the larger your reach, the more fans you will have.

However, I believed the reverse could be just as true — the more core fans you have, the more monthly listeners you will have. Since the data displays only the total numbers, instead of the trajectory each grew, it seems impossible to draw the conclusion reach correlates to building hardcore followers, as opposed to vis-versa.

I started to think about some of my favorite artists…

When I look back at Billie Eilish’s campaign, she was always putting out the highest quality art and her vivacious fanbase (me included) was always spreading it… It was only a matter of time, but everything seemed to click into another gear when her collaboration with Khalid was released… Because he had the reach. In fact, Ocean Eyes, a two year old single, finally saw itself added to Today’s Top Hits following the release of the collab. 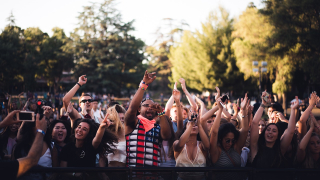 Or the time I was in 7th Grade and Kanye West became my favorite artist (and still is to this day)… I went to see his show because I saw him on the cover of TIME Magazine. What kept me engaged all these years later is his music, storytelling and fan first activations like Good Fridays, which is now almost ten years old, but was truly revolutionary to experience at the time. While I fell in love with his artistry at the show, I was there in the first place because of the reach of that magazine cover.

To Amber, marketing to your fans and the wider audience at large are not mutually exclusive and she believes you need both… But are we as an industry addressing reach enough?

Are we relying too significantly on playlists and or radio to provide the level of exposure our artists need to reach the masses?

What else should we be doing?

This gets deeper… And more important…

Record labels often spend about 80-90% of marketing budgets on content creation! In fact, there is no more important word than CONTENT in marketing circles these days.

When we think about marketing artists, we start with: What is the content strategy?

How do we keep it distinct, differentiated, relevant, frequent, and “another buzz word here” enough to build fans?

As the industry adapted the strategy as they knew it (MTV/TV/shared viewing) to a new format (YouTube/mobile/solo-viewing), what did other industries do? Industries who are guided by the scientific laws of advertising proven over several decades…

In other words, how much do other industries spend on content?

For example, let’s say the average cost to produce a Super Bowl ad is $1,000,000-3,000,000… The advertising budget for that commercial will be several times that — It costs over $5MM just for the 30 second spot in the game. Plus, the commercial’s assets drive a larger campaign strategy, with agencies recommending brands spend 25% of the commercial’s cost to market the spot before it even airs!

In other words, many industries spend 5-10x more on reach than they do on production.

The paradox of content vs. advertising dollars compared to the music industry is insane!

One could argue music industry differs in the sense the production is the product.

However, in the movie industry, it’s not uncommon for blockbusters to have a marketing budget equal to the cost of a production budget. But in the music industry, videos get made for $5,000-50,000 and have marketing budgets of $500 to a few thousand at most in advertising.

We must remember artist campaigns are built over time – We must continue to prioritize creative and paid marketing post release to give the music a chance to be heard.

Amber doesn’t believe advertising has to be social ads… It can be 50 memes pushed out through influencers or a sponsored Buzzfeed takeover. Depending on the artist, certain tactics will work better than others to build their platform.

While the music industry will likely never get to the point where 80-90% of marketing budgets are spent on advertising over production, the point is it’s time to re-strategize from the beginning of a campaign to put at least as much money toward reaching a wider audience as we put toward creating the content itself.

For reference, I’ve had multiple executives refer to their paid media strategy as a primary driver for an artist they broke in the past 12 months.

I recognize as Amber says in her article that most listeners will be “light and infrequent” and “to grow market share, you need to amass many light listeners who may only listen a few times”.

With that being said, I still believe it all starts with the core… However, once you have it, maybe it’s time to spend more on marketing than you originally planned!

If you found this deep dive useful, please send it to your friends who work in marketing as it could make a difference for aspiring artists in need of reach to get their art seen and heard!