The suspension of all music crowdfunding campaigns on PledgeMusic continued Tuesday, six days after they began. The company has been silent since last week, leaving thousands of musicians in the dark and in many cases, owed tens of thousands of dollars in funds pledged by fans. 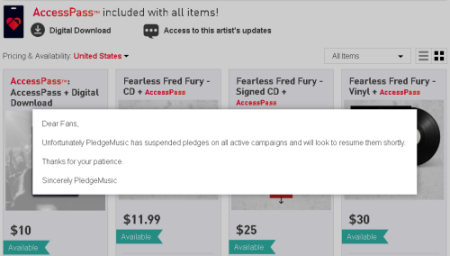 Attempts to contribute to multiple campaigns on Tuesday morning resulted in a pop-up reading: "Dear Fans, Unfortunately PledgeMusic has suspended pledges on all active campaigns and will look to resume them shortly. Thanks for your patience."

While the startup is known to actively be searching for a cash infusion, no credible rumors of a buyer or white knight have emerged in recent days.

The company's social media accounts have been silent and emails requesting comment unanswered.