In this piece, the team at Tracklib took a deep dive into the state of sampling in 2019, breaking down who's sampling what, the rationale behind it, what the preferred software (and hardware) is, plus some of the past year's most prominent sampling moments.

What’s the overall state of sampling right now? The Tracklib team dug deep into statistics from 2018's music to answer this question. A full overview like this has never been done before and we will make this an annual tradition.

How Much We Sample

“Why is that important? Some people even say sampling is dead.”

WRONG: 1 in 5 songs in the Billboard top 100 of 2018 include samples. As a matter of fact, there are almost twice as many samples now compared to a decade ago. This State of Sampling feature has been built around actual numbers to give insights into how much producers sample. 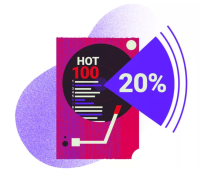 Looking back on 2018, 20% of the top 100 tracks contained samples. It's been fairly consistent the last few years: usually between 20-25%. Looking back 10 years, the number was 14%. The increasing popularity of Hip-Hop has probably also had an impact on the number of samples. In 2018, Hip-Hop surpassed Rock to become the most popular music genre in the U.S. 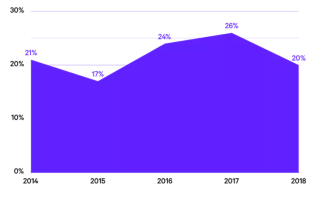 Twice as Many Samples in 10 Years

A total of 28 samples were found in the Billboard Top 100 Songs of 2018. Songs like Cardi B’s “I Like it” and Drake’s “In My Feelings” and “Nice for What” included several samples, which is why the number turns out to be a bit higher than the grand total of 20%. Looking back 10 years, on the End of Year chart of 2008, it only included roughly half as many samples: 15.

The Top 100 song containing the most samples was Drake’s “In My Feelings”, with 4 separate licensed samples – all vocals. 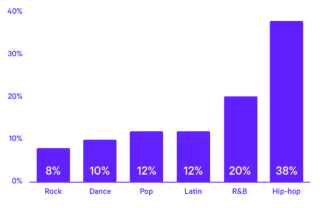 Looking by genre, we can see that sampling is most common in rap music. No surprise there, as sampling has always been an integral part of Hip-Hop productions. 38% of last year’s biggest Hip-Hop songs contained samples. R&B is the runner-up with roughly half as many samples (20%) as rap music.

But even in the genre least known for sampling, Rock, samples are used; 8% of last year’s biggest Rock songs contained samples. For example, Panic! At the Disco sampled James Brown and Death Cab for Cutie sampled Yoko Ono in 2018 releases. 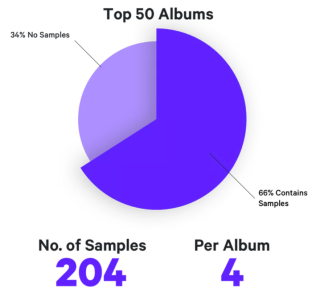 Two-Thirds of All Albums Contain Samples

A majority of the top 50 albums last year contained samples. A total of 204 samples appeared on those albums, making it four samples per album on average.

Drake’s album ”Scorpion” was the album containing the most samples (21) in Billboards top 100 albums 2018. That's the same amount of samples as the Billboard's top 50 for Pop, Dance/Electro and Latin contain combined. That’s 13 Drake-songs versus 150 top-hits! 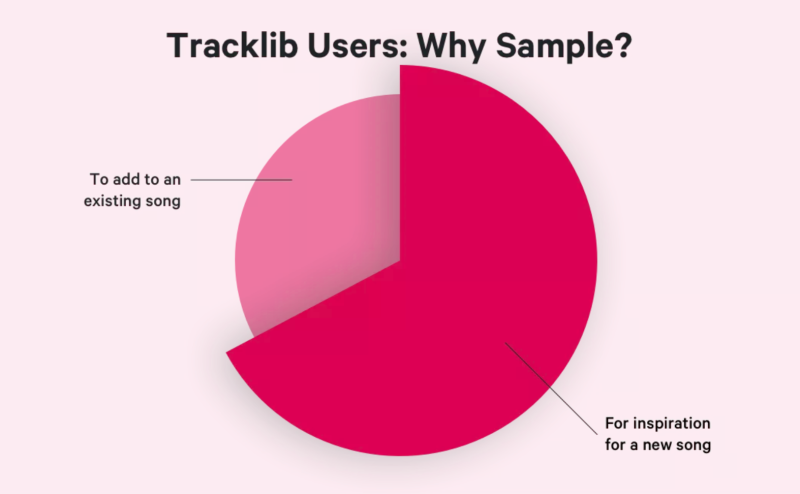 As early as the 30s and as late as the 2010s: each decade differs from each other in terms of style and samples. Which era is most-loved by producers? And where do they get their samples from in an ever-changing industry where you don’t need an original vinyl record anymore to find a sample? 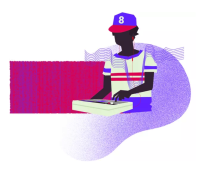 Producers Tend to Sample Music from Their Childhood

By looking at the songs a handful of top producers sampled in the last 3 years, it becomes clear that their birth year affects what songs they choose to sample. It obviously differs from song to song, but on average, we can see that the release year for the songs a producer samples tend to be around when they were between the age of 5 and 10. 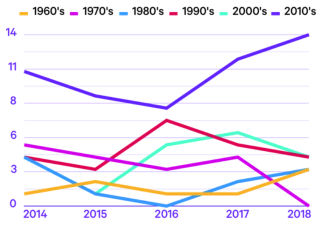 No songs sampled the 70s.

A common belief is that music from the 70s is the best suited to sample. In a survey, Tracklib’s users also said they prefer to sample 70s music to other decades. Because of this, it's a little surprising that not even one song on the Billboard Top 100 last year sampled 70s music. It's of course still very popular, but the most common decade to sample right now is actually the 2010s. 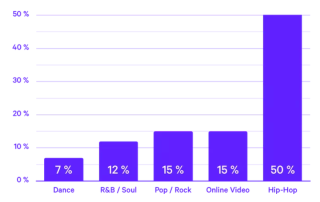 Hip-hop is not only the biggest genre on the charts, it’s also by far the most common genre to sample, with around 50% of all samples coming from Hip-Hop. 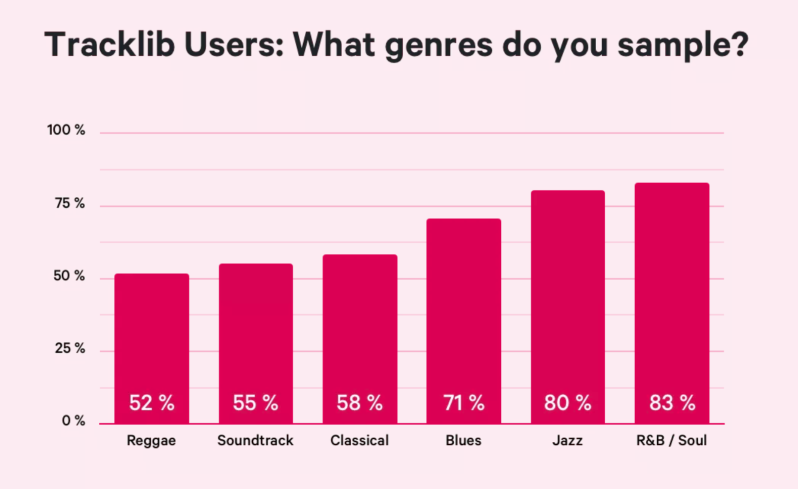 The reason we do this State of Sampling now, is also to be able to take a step back and reflect on 2018 as a whole. What were some of the key trends, and which developments influenced artists the most? It's time to reflect on trends together with one of the world's most renowned sample experts. 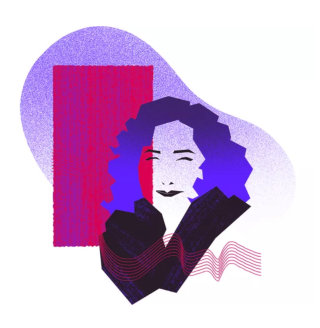 'The Queen of Sample Clearance'

Deborah Mannis-Gardner is one of the world’s most renowned sample clearance experts. Last year her team cleared over 1.500 samples. She's worked with artists like Eminem, Kendrick Lamar, Jay-Z, Drake, Kanye West, Lil Wayne and Lady Gaga, to name a few. We asked her if she saw any sample trends during 2018.

Trend #1: When estates take over

"Some artists always deny sample requests, and Prince used to be one of them. But sampling his music definitely got easier this year. I’ve secured the rights to Prince for a client, for an interpolation, which never happened when he was alive.” 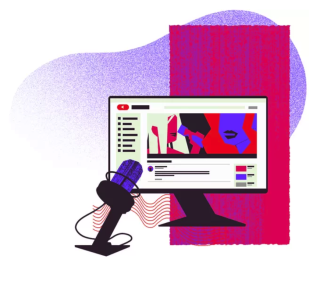 “Many producers tend to do their crate-digging online nowadays, which helps them find a lot more obscure music to sample. This, of course, makes my job a lot harder since it can be very hard to figure out who the original rights owners are. The biggest problem I’ve had is Russian stuff. And Cuban. As a US citizen, I can’t even call Cuba."

"Most top artists are not taking any chances and are clearing everything. Marshall (Eminem) is like that: he used a couple of words just one time, but because it was a nod to another artist he thought it was very important to clear it. And then you have artists on the other side of the spectrum where the mentality is more like 'Release first, clear second'. I've seen more of those, this year. Nothing I would recommend, obviously." 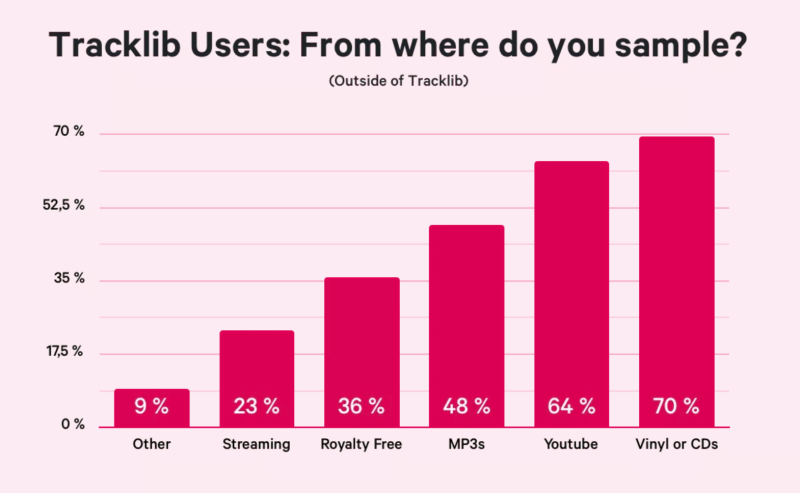 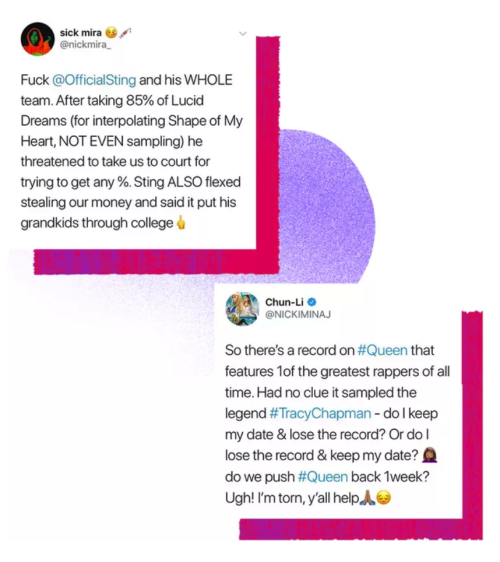 Who would’ve thought: Sting in a Hip-Hop beef. Producer Nick Mira called out the “Shape of my Heart” singer for threatening a lawsuit over Juice WRLD's "Lucid Dreams". Despite Sting calling the track a "beautiful interpretation" of his track, Mira went off on Twitter: "Fuck Sting and his WHOLE team…"

In a series of now-deleted tweets, Nicki Minaj desperately tried to get in touch with singer-songwriter Tracy Chapman about a sample of Chapman’s “Baby Can I Hold You”. It got messy: Chapman “repeatedly denied” the clearance request, Funkmaster Flex premiered Minaj's "Sorry" on Hot 97 and the song got out there, resulting in a lawsuit for copyright infringement. 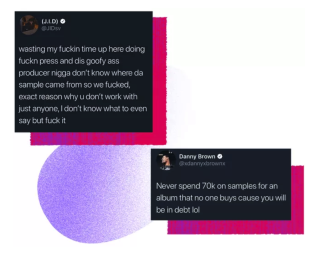 Dreamville’s and Spillage Village’s J.I.D. got frustrated about a producer slacking with his sampling. His tweet was a note to self and a reminder for all producers to always keep track of where your samples come from.

Danny Brown tweeted “Never spend 70K on samples for an album that no one buys cause you will be in debt lol”, referring to the samples for his intricate ‘Atrocity Exhibition’ album from 2016. The album debuted at number 77 on the Billboard 200. 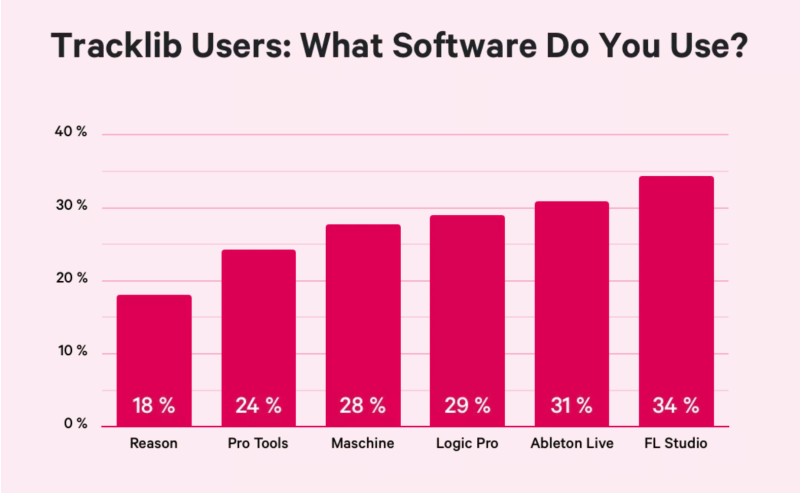 A few examples taking sampling to another level last year; from sampling a BMW seatbelt warning to a 1936 Christmas song. These are some of the biggest and most talked about samples in 2018. 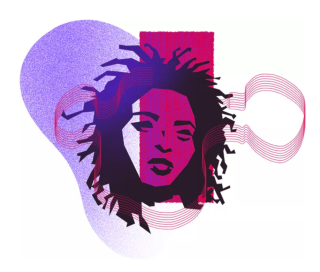 Lauryn Hill is known for declining sample requests for her music. But she made an exception for Drake’s “Nice For What”, one of the year’s biggest tracks.

That sample became a part of a long sampling chain: Lauryn’s ”Ex-Factor” heavily samples Wu-Tang Clan’s ”Can It All Be So Simple” from 1993, which samples a Gladys Knight & The Pips’ song from 1974, which is a mashup of Barbara Streisand’s ”The Way We Were” from 1974 and Jerry Orbach’s ”Try to Remember” from 1960. 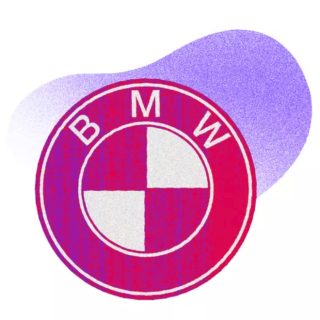 The sample of a BMW I8’s belt alarm had an essential part in XXXTentacion’s hit ”SAD!”, produced by John Cunningham. With over 1,5 billion streams (around 7896 years in total streaming time), BMW I8’s belt alarm is surely the most streamed alarm ever and probably a first.

Kanye flipping a xmas song from 1936

For his “4th Dimension” track with Kid Cudi, Kanye West went all the way back to 1936 for a Christmas song sample: "What Will Santa Claus Say (When He Finds Everybody Swingin')" by Louis Prima. Definitely one of the oldest and most unexpected samples of the year. 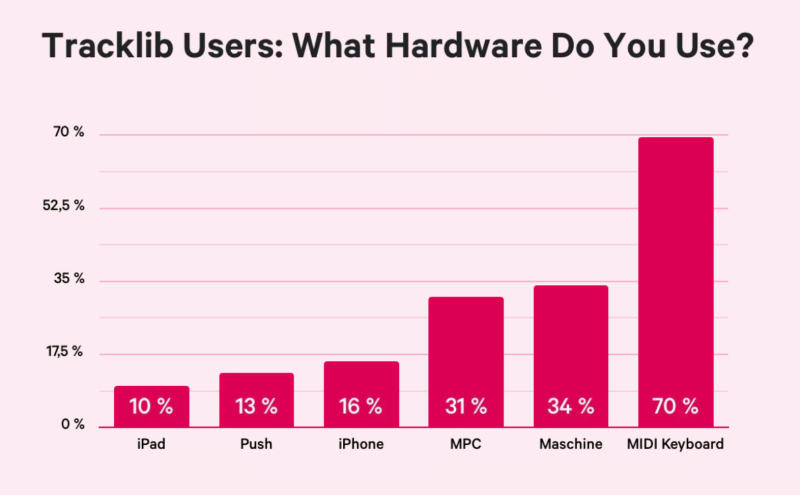 Sampling is alive and well–and actually growing in top music. Hip-hop is the world’s biggest genre and shows no signs of slowing down, which of course also impacts the number of samples. The rising popularity of Lo-Fi beats this year also introduced more young producers to sampling, as it’s an overwhelmingly sample-based subgenre. But it's still fairly underground and a vast majority of the samples in Lo-Fi are not cleared. Another development: more sample-packs and advanced tools mean less need for sampling smaller elements such as a snare. Case in point: there are extremely few drum samples used in Billboard Top 100 songs of 2018.

Hopefully the ease of Tracklib can make sampling available to more producers in 2019. I guess we’ll see what The State of Sampling 2019 brings us…

For this piece, we mainly looked at Billboard’s End of Year lists for the top songs and albums. This means it doesn't include every single song or albums that appeared on the top 100 throughout the year, only the top 100 for the full year. We counted direct samples and interpolations from previously released music as samples. However references of lyrics has not been counted. Worth noting is that since we only examined the biggest hits of the year, it doesn’t necessarily represent the statistics of sampling as a whole. Besides Billboard's charts, other sources were Chartmetric, ASCAP, Whosampled, DMG Clearances, Sample Spotters and our own user survey.