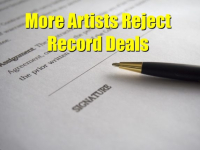 Some record executives are starting to sweat, as  the music industry morphs into one where the climate is significantly more favorable towards a DIY way of doing business and many artists are eschewing traditional label deals in favor of doing things their own way.

If you speak with record executives, they’ll tell you privately that one of their biggest concerns is the fact that many artists are no longer interested in signing a recording contract. Thanks to the current DIY nature of the business and the fact that labels are more and more only considering “finished products,” artists no longer feel that a label has much to offer.

A perfect example is the non-start negotiations with 16-year-old Memphis rapper NLE Choppa, who’s recent YouTube video of his song “Shotta Flow” garnered major label attention after it hit 10 million views. In fact, a bidding war among record companies like Republic, Interscope and Caroline soon reached bids as high as $3 million, which the rapper promptly declined.

Instead he entered into a deal with indie distributor UnitedMasters which allowed him to maintain ownership of his material, but without providing an advance. The artist realized that he could make the full amount of royalties from streaming networks like Spotify, Apple Music and others rather than splitting with a record label. UnitedMasters now distributes music for 30,000 artists.

For many artists, the idea of a record deal is still the epitome of their musical existence. The problem is that most who feel that way haven’t yet spent any time connected with a label, where the reality is much different than the perception.

The fact is that a record label is a business that, especially today, spends its time working on projects that are hot, while turning their back on what they think is not. You only have a short time to prove yourself before you’re “not.”

But artists today have heard all the stories and are far less likely to give up control, especially after they’ve achieved a little success on their own. The lure of the record label deal isn’t what it once was, and maybe that’s a good thing.