Marshmello isn't the only artist to capitalize on the popularity of Epic Games' Fortnite. Now Weezer has pulled their own digital promo stunt with the launch of their own band themed island in the popular game to accompany Weezer's new album release.

With their second album of 2019 arriving March 1, Weezer has become the latest musical act to join forces with Fortnite, the world’s most popular game.

Brand collaborations are a major focus of Epic Games’ smash hit Fortnite. The free-to-play game, which boasts more than one-hundred million players worldwide, has previously partnered with Disney and Marvel to promote Avengers: Infinity War, as well as the NFL. The company also has an interest in music and its role in gamers’ lives, which they made evident by hosting the first in-game concert ever in early February with special guest Marshmello.

On Thursday, February 28, Epic Games and Fornite continued to express their interest in music by unleashing an island dedicated to the band Weezer. The location, which features loads of Weezer branding, offers players to hear the band’s new material from the group’s Black Album ahead of its official release on March 1. You can view a quick walkthrough of the new area below: 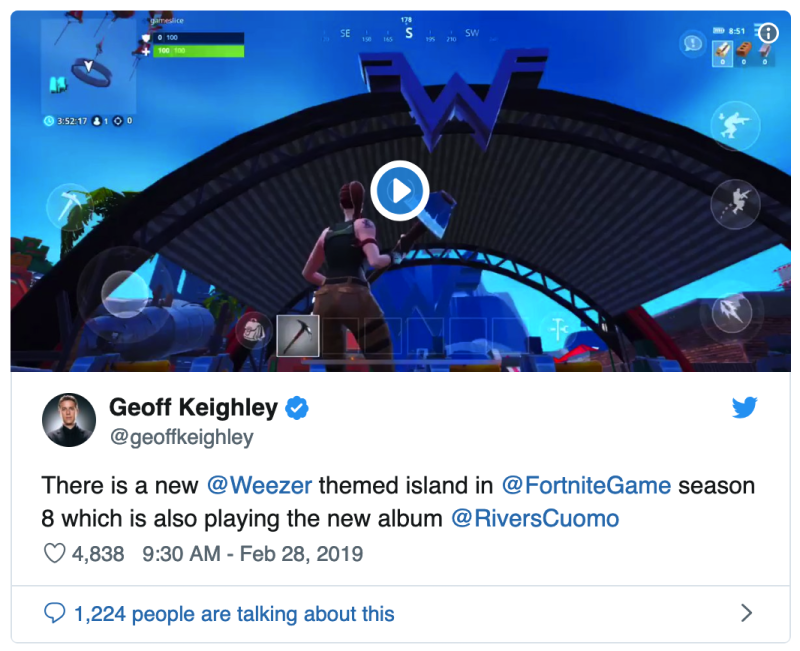 Unlike Marshmello’s performance, which was promoted as a one-time event throughout Fortnite’s main screens, players hoping to visit Weezer’s island will need to do a bit more work. First, players will need to select the game’s Creative Mode. From there, users need to find the portal that will transfer them to the limited time island. The portal itself looks like any other, so pay attention!

It’s unclear how long this collaboration will last. Marshmello’s performance lasted ten-minutes and took place two times in one, twenty-four hour period. Weezer Island (our name, not theirs) may only be around until The Black Album arrives in stores on March 1.

The other thing that remains unclear at this time is what Epic Games might have in store for music fans down the road. Between their work with Marshmello and now Weezer the company has showcased a lot of potential for collaborations with high-level talent in the future. Where it all leads from here is anyone’s guess, but we’ll update you as soon as more information becomes available. For now, kick back and watch Weezer’s latest music video