Music Industry’s Revenue Growth Continues, But There Are Warning Signs

New numbers released by the RIAA show that recorded music revenues have continued to grow over the past year, reaching an uptick of 13% overall. This is good news for an industry which was struggling to stay afloat not long ago, but also carries with it some warning signs, and questions about the future.

The RIAA released its semiannual compilation of recorded music revenues this week. The numbers for 2018 show that the industry is continuing on the growth path that started in 2016 after an 11-year slump: Overall growth was 13% over last year to $9.8 billion—off slightly from 2017's 17% growth over 2016 but healthy nonetheless. 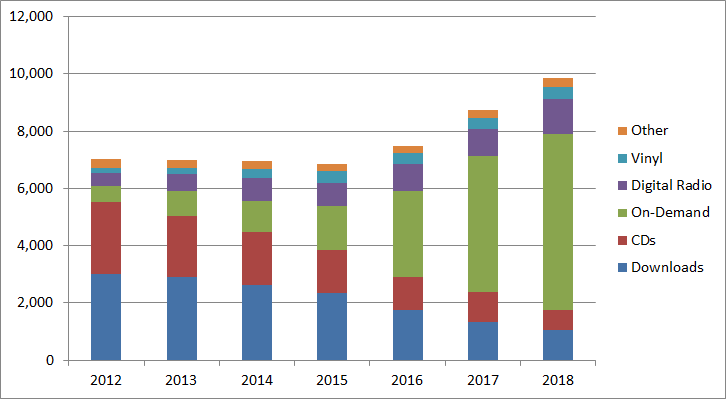 Interactive streaming, through services like YouTube, Spotify, Apple Music and Amazon Music Unlimited, is now dominating the industry even more than before. Revenue from those services is now 63% of overall industry revenue, and total subscribership has topped the 50 million mark. Digital radio (Pandora, Sirius XM satellite radio and streams of AM/FM stations) is also returning to growth after stalling last year, exceeding the $1 billion mark in 2018 and adding another 12% of industry revenue. That means that streaming now accounts for three-quarters of total industry revenue.

Meanwhile, paid downloads and CDs are continuing their slides into irrelevance. Download revenue—mostly from Apple iTunes—is at just above $1 billion and dropping. CDs dropped below $1 billion in 2017 and brought in only $708 million last year, a far fall from their $13.2 billion peak back in 2000.

In fact, CDs are on track to fall below vinyl by the end of this year—especially counting the used vinyl market, which is roughly equal to new vinyl in total revenue.

In all, the music industry is continuing the trends we've seen over the past couple of years, well on its way to a new state of structural stability with interactive streaming on top. Industry watchers used to wonder whether consumers would embrace the monthly subscription model over physical products or "ownership" of permanent downloads. No one wonders about that anymore; instead, we wonder how much further streaming can grow. And the 2018 numbers give us a somewhat ominous clue: The growth of paid-subscription interactive streaming revenue is clearly slowing down. 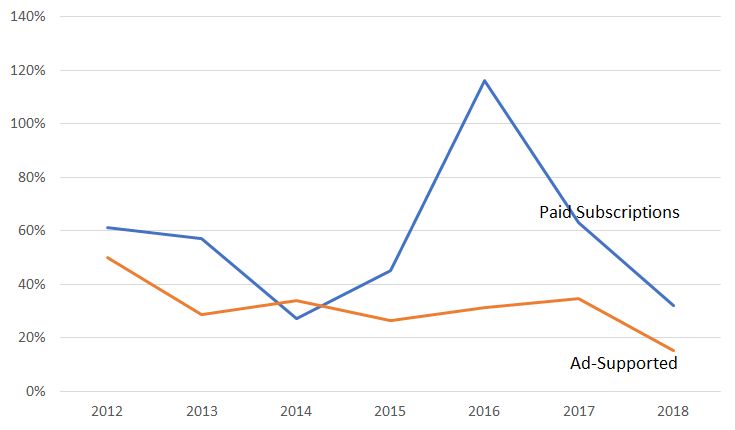 As this chart shows, the "hockey stick" growth year for interactive streaming was 2016, when revenues more than doubled over 2015. The growth rate has been declining for the past two years; meanwhile, the growth of ad-supported interactive streaming—primarily YouTube and Spotify's free tier—is headed for zero.

If these trends continue, we should see the upper limits of the music industry's new growth engine within the next couple of years, and the U.S. recorded music industry will end up somewhere in the $12 billion range, somewhat below its $14.6 billion peak from 1999, especially when adjusted for inflation.

This raises the question of where recorded music will go next. The era of interactive streaming is recorded music's fifth era, after vinyl, tape, CDs and downloads. By the time revenue from one era flattens and begins to decline, the industry has some idea of where the next wave of revenue is going to come from. On the one hand, apart from some nascent ideas around the smart speaker market, we have very little idea of that right now. But on the other hand, interactive streaming is recurring revenue, not one-time purchases, so it's not going to drop as fast as revenue from previous eras did when the next thing came along. The music industry still has time to figure out its next act.

Bill Rosenblatt runs GiantSteps Media Technology Strategies, a consultancy that focuses on digital media technology, business models, and copyright. Check him out on LinkedIn or Twitter.