Over A Third Of Americans Now Own Smart Speakers, So What Does That Mean For Artists? 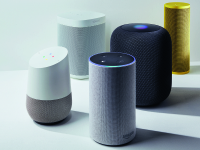 As an increasing number of Americans (now over 36%) acquire smart speakers, changing what the future of audio consumption looks like, some artists may be forced to rethink not just their promotional strategy, but their entire brand identity.

More than 1/3 of American consumers have smart speakers in their homes. The future of audio consumption is here, but artists may face unforeseen problems in the coming years.

As Bob Dylan famously sang, “the times they are a changin.” Just four months after it reports that 14% of American homes had smart speakers in them, a new study from Adobe Analytics has found that more than 1/3 of American consumers, 36% to be exact, own one or more smart speakers. That’s massive growth in a small amount of time, and the market will likely expand further in the months ahead.

The 2019 Adobe Analytics Voice Report surveyed more than 1,000 U.S. consumers over the age of 18 from January 28-31 of this year. It found smart speaker ownership leaned more heavily towards males, with 43 percent of men claiming to own the devices compared to just 29 percent of women.

Overall, the age group ranging 35-54 dominated ownership, with 47 percent claiming to have a device. The 18-34 group followed with 40 percent, then the 55-64 group with 37 percent and the 65-and-over group claiming 25 percent ownership.

How the gift-giving holiday season impacted ownership was not studied, but it likely played a factor in the growth seen across all demographics.

Other findings in the study include more people reporting that they are using their smart speakers for playing music (74 percent, as compared to 70 percent in August 2018) — the most popular use of smart speakers overall. It’s also most likely that people keep their devices in their living rooms (64%), but bedrooms (46%) and kitchens (32%) are popular locations as well.

All this information is a good thing for artists and labels alike. A study by AudienceNet at the end of 2018 found that homes with smart speakers listen to 50% more music than homes without and that those same homes are 49% more likely to listen to music for more extended periods. They also listen to more playlists.

But there is something else to consider here, and that is how artists will promote themselves as smart speakers continue to become commonplace in homes around the world. Throughout the history of recorded music, an artist’s image and branding has been the primary way to build familiarity with consumers. However, smart speakers strip away the importance of image and place an emphasis on names, which will inevitably force artists to choose names that are original and easy to recall. Will it also force bands with highly stylized names to change? Will H09909 (pronounced ‘horror’) or Fever333 have to rethink their promotional strategy? Only time will tell.

There’s also a question about how the algorithms smart speakers use will sort artists with similar names. If someone asks Alexa to play music by The Red Trees and there are two or more artists with that name, which artist gets chosen and why?

The same can be said for songs. There are at least 42 songs titled “Let It Go” available on Spotify, Apple Music, and Amazon music right now. If I ask to hear that song without knowing the artist associated, which version gets played and why? Will smart speakers learn our tastes and make a guess based on past behavior? Will it choose the most popular version?

There are a lot of questions to be answered, but the fact remains that smart speakers are good for music overall. Smart speakers encourage increased listening, and that means more streaming royalties for artists, as well as more chances for new artists to be discovered.