The Recording Industry Is Growing, So Why Do We Need Article 13? [Op-Ed]

With Article 13 just weeks away from becoming law both sides are ratcheting up to support or fight the copyright directive.  Mike Masnick sits firmly in the later cap and asks why the restrictive legislation is need at a time of explosive growth in the music industry.

By Mike Masnick from Techdirt

A key claim by those who support Article 13 is that it's necessary to get "fair compensation" for artists on the internet. Whenever more specifics are needed, supporters almost always point to musicians, and talk about "the value gap" and how internet companies are taking all the money and recorded music has been destroyed by the internet and all of that. And, of course, if you've followed the rhetoric in the last 20 years since the introduction of Napster, you'd believe that the recorded music business is in a never-ending death spiral. Of course, as we've pointed out, the "recorded music business" is just one segment of the larger music business, and nearly all other aspects of it (especially live music) have continued to grow pretty consistently each year.

But, a funny thing has happened in the past few years that undermines the doom and gloom message: the recorded music business has been growing. Rapidly. And it's entirely due to the internet and all of the various services that the RIAA had been slamming for years. Indeed, it did seem notable when the RIAA put out its latest revenue numbers for 2018, showing the incredibly rabid growth over the past four years of the recorded music business. So I started taking an even closer look at what's happened over the past decade. Thankfully, the RIAA actually makes all of the data available, and so I put together this handy chart: 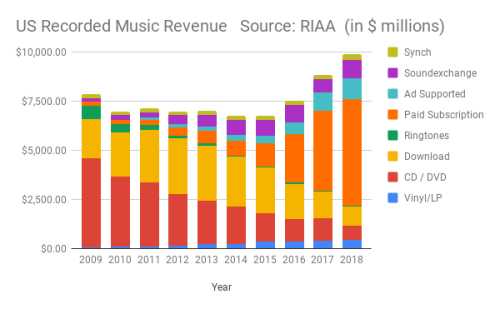 So, yes, things sort of bumbled along for the first few years of the past decade, but the last few years are ones of massive and incredibly rapid growth due to online streaming. The US recorded music business is right at about $10 billion (if you're interested, the live music business in the US is about the same, counting both ticket sales and sponsorship).

Now, you might say, well that's just the US, and Article 13 is about Europe. Thankfully, IFPI puts out similar numbers (counted slightly differently, unfortunately, so it's not an exact comparison). IFPI has not yet released its 2018 numbers, but looking at the report from last year you see that the global numbers show a pretty similar change, again, with things bottoming out a few years back, and then showing new growth, almost entirely from the rapid increase in streaming services. I expect when IFPI releases its 2018 numbers, we'll see just as dramatic a bump up as we see with the RIAA's US numbers: 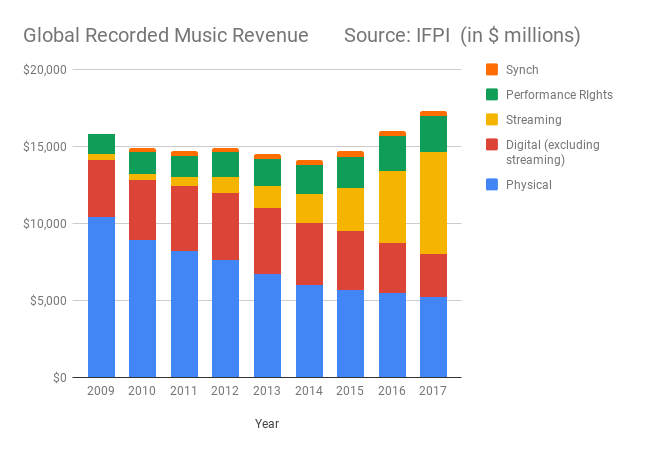 So, it certainly looks like the internet (as some of us predicted…) has absolutely been the savior to the music business — it just took the legacy companies hellishly long to embrace it.

But, again, I'm left wondering why is it that we need Article 13 again? To hear Axel Voss and other supporters talk about it, the recording industry is in a death spiral without it. Yet, the actual stats show things are going quite well and growing like gangbusters.