Major label owned music video platform Vevo has discovered a simple tactic that leads to an average double digit improvement in engagement. This tactic works particularly well for videos released years ago, many of which were getting lost within YouTube’s massive and always growing catalog.

What is Vevo's secret sauce?

Improve the thumbnail that represents each video.  Tell the story of the video with a brighter and more eye catching image and the results can be dramatic, reports Variety.

from Vevo via Variety

Halsey released a video for "Ghost" in 2014 and interest had faded. But after Vevo replaced the thumbnail last September , the video saw 4000% growth in views in the two weeks after the change. Views did eventually flattened out, but still remained higher than they were previous to those changes.

Overall, videos with new thumbnails see a 12% uptick in the first 20 days, followed by a sustained increase across the 4000 catalog videos tested. 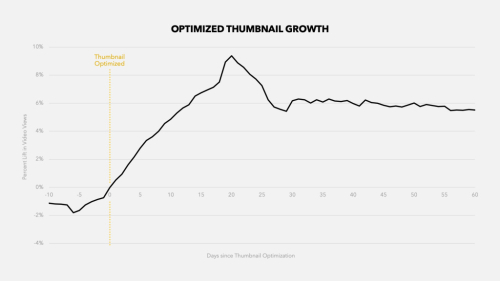 Optimized thumbnails also contribute to a virtuous cycle, according to Vevo:

"Once users click on them more often, YouTube’s algorithms promote them more frequently, leading to further growth. And that virtuous cycle can also extend beyond a single clip: Vevo has found that boost an older videos with better thumbnails can also help to make the release of a new video of the same artist more popular."