5 Things To Keep In Mind For Your Next Photo Shoot

As an artist, having solid promo photos is key, so when prepping for you next photo shoot, it's important not only to make sure you look good, but also also that these five key logistics are fully kept in mind before that shutter starts clicking.

When you set up your next photo shoot, there’s a lot to think about. As you sit in front of camera, you may be worried about how your hair looks, if the outfit is right, or perhaps even if you have something in your teeth!

I don’t mean to add more to your list of concerns, but there are a number of logistical details and technical things that you need to consider as well. Failing to do so can have unfortunate and unwanted ramifications, and it’s much, much easier to simply make sure you’ve got everything covered before that shutter clicks even once.

In 2019, it’s crazy that anyone even needs to be talking about hi-res versus low-res when it comes to photos. For the most part, taking, storing, and sharing photos in very high resolution is easier than ever, (and every year, it seems to become even easier). For a long time it was a more difficult process, but technology has improved so quickly, it should now be the norm – yet, it still goes ignored by some bands and artists.

Whether it be with a professional-grade camera or a cellphone, shooting in hi-res requires nothing more than a quick change in settings. These pictures take up a lot of space, which is why storing and sharing them used to be an issue, but finding space in online storage lockers, on computers, and so on is simple now, as is sharing them with anyone who may want excellent quality pictures of you.

Hi-res photos will come in handy at many points, so you need to make sure you not only have them, but that you stick to using only them. Whether it’s posting them on your website, using them for printing posters, album covers, or merch, or perhaps even sharing them with journalists for coverage, you’ll need snaps taken in the highest of quality, and if you don’t have them readily available, it can be an immediate detriment. The only time when lesser quality pics will be acceptable is on social media…but posting hi-res on those platforms doesn’t hurt either!

I find myself running into this issue as a journalist quite often, and I am continually shocked. When you’re taking pictures, think about the fact that you will likely be using them for many different purposes, with press being one of them. You will want to be able to supply bloggers with pictures of your and your band that they can use if they choose to share your music, so you need to make sure you’re giving them something that actually works for them. 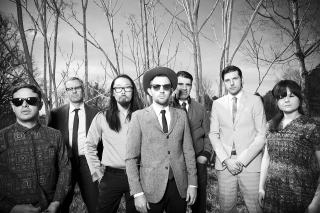 A quick look at most, if not all of the major music magazines and blogs shows you that they almost always use horizontal photos. It’s simply what works well online, and thus you need pictures that have been composed horizontally. I constantly ask managers and public relations people for this kind of photo, and far too often I am met with the answer that no such images are available. This is very frustrating, as it means sometimes I need to clip a provided option, or that I need to search for something else.

As should be the case anytime you’re requesting another person in any business to use something you’ve giving them (which benefits you), make sure it’s something they can actually work with!

Having pictures you can share with promoters, journalists, and even fans is a great idea, but make sure you don’t only pick one snap and run with it. As a journalist, I always want a picture that is my own, or perhaps one I haven’t seen many times. It’s always a bit boring when a band only has a single photo that’s used everywhere, as it gets very tiring, and it’s not preferred by many who are forced to use it.

You don’t need to have dozens of options when it comes to approved press photos and the like, but a handful is a good idea. Perhaps four or five different images per campaign or era would work best.

Again, this should almost be a given at this point, but I run into this issue so often, I take any opportunity to beg people to consider this during their next photo shoot.

Whenever a major publication uses an image, attribution must be provided. It doesn’t matter what happens on the back-end (meaning it doesn’t matter if you, the musician, took it yourself, paid a professional photographer, or even asked a friend to quickly grab some nice shots), you must provide writers with the name of the person behind the lens. Without proper credit, some editors won’t allow the photo to be used at all.

If you don’t provide this information upfront, the journalist may have to come back to you asking for it, and that’s an annoying separate step. In some cases, bands, or their representatives, don’t even know, and thus the picture can’t be shared.

Chances are the next time you pose for a photo shoot, it will be because you have something new to share with the world. This will likely be an album that’s coming, and thus it’s essentially a new era in your career. As you craft your album, you should also be thinking about all aspects of this segment of your life, and everything should fit together smoothly.

You’ve likely noticed that when a superstar launches a new album, the album cover, the music videos, the merchandise, what they wear on red carpets…seemingly every little detail seems to fit perfectly into that time period.

The underlying theme may be a color, a certain style, or maybe one special accessory or haircut. Even if it’s not that specific, you still want to make sure that the pictures you’ll be sharing with the world on social media, as well as with various parties during this time, all help people place when they were taken.

This is music marketing 101, and cohesiveness will help you build up your work and make your album more than a collection of songs, but rather an entire period in what is likely an illustrious career.