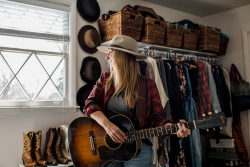 When critically acclaimed singer/songwriter, Amy Speace, live streamed a Concert Window album preview from her walk-in closet to the fans who had just helped fund its release, it wasn’t because she couldn’t book another venue. It was because she is both a new mom, and a musician, and with a one year old asleep down the hallway, it was a way to say yes to both.

So far as I’ve observed it, the intersection of parenthood and any career is a tricky one to navigate. Reliable road signs are few and far between, and the unpaved roads are often lined with critics telling you exactly how you should/could do things on the wrong side of wondering how to do them. There’s a tug of war the seems to emerge amongst the things that need you for all parents, but there is a special kind of push-pull that shows up just for the mamas. 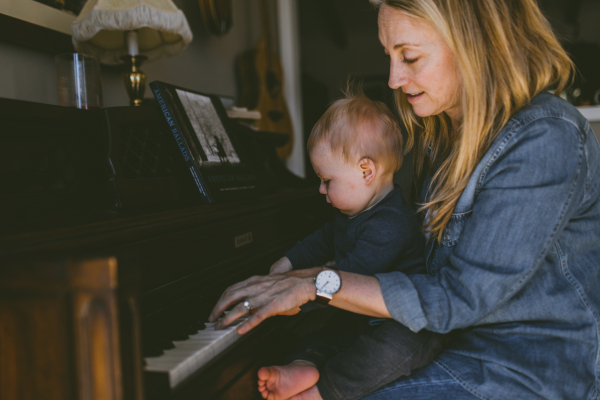 Over the last several years, I’ve had the honor of photographing and getting to know a growing army of women who are actively shifting the narrative away from this Either/Or facade, and instead, championing one another as they learn how to be Both/And and so much more. As a fellow freelancer, eagerly tiptoeing towards the work – life – family  juggle, knowing there is no “paid maternity leave” in my future, I am especially interested in these conversations, and learning how other women are bridging the gap.

Enter Concerts from the Closet, a monthly Concert Window series hosted by Amy Speace, born out of equal parts necessity and resourcefulness.

For Amy, hosting a regular series through Concert Window was a way to remain connected to her fans while scaling back her time on the road. “I haven’t been touring much lately, so for an hour, on the first Monday of every month, I decided I’d practice my new songs, play some old ones, and take people’s requests. So if you’re a huge fan of mine and you want to hear what I’m doing, and just talk to me, I’ll be there,” Amy said of  her vision for the series. ”That’s how it all started, but then I thought, if I’m going to do this in my closet, it should be fun. Maybe I’ll have somebody else come.”

And so she did. 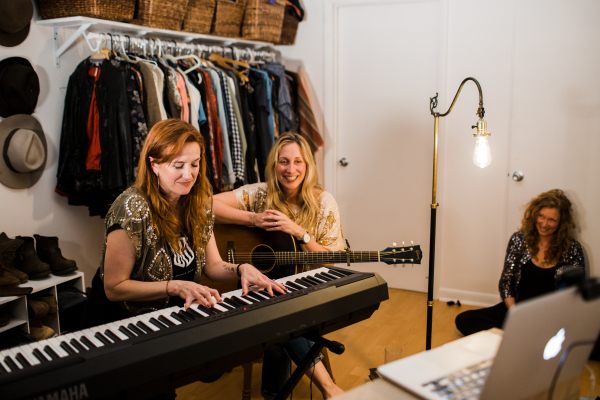 On April 1st, just moments after putting her one-year-old to bed, Amy kicked off the first of many Concerts from the Closet with special guests Kira Small and Alicia Viani. They played new songs, old songs, talked about life and music, and laughed until they cried, all without waking the baby.

A victorious moment at the intersection of motherhood and music making, but I’m a sucker for the moments in between.

When I asked Amy about the push-pull she’s experienced in her career since becoming a mom, she was an open book about the dots that have been hardest to connect. “Creating takes silence, vast amounts of silence, and 'a room of one's own.' The body being the room that the baby took, the home being taken over by toys and things that whir and make noise and light up, and the baby is demanding. There's no silence, there's no room of one's own, there's no body of one's own, so the time management with an artist is such a severe challenge that most give up.”

But giving up has never been in Amy’s playbook. In fact her overwhelming reply to those seemingly surprised by the fact that she’s “still here” is that she never left. That she’s better than before. Sleep deprived, yes, but tack-sharp. Present. On fire. 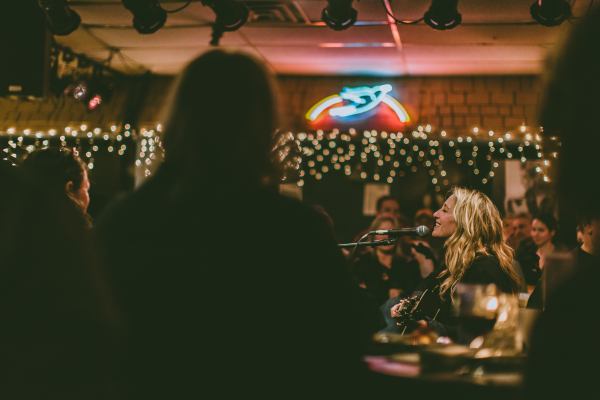 Of course she posts her tour dates on Bandsintown, but keeping up with social media is a constant battle. It’s a race to stay relevant, to churn out enough content for Facebook, Instagram, email campaigns, and Patreon, never mind songwriting, or the book she’s pouring herself into writing, or the how, when, and how much of getting back out on the road to best serve her new record that’s been waiting in the wings. She dives further into the realities of trying to find balance in both worlds in Menopausal Mommy, a brutally honest, tear-jerking, gut-punching, laugh till you pee your pants chronicle of her midlife pregnancy and beyond. It reads like a question to herself, with an answer for all of us (women): Can I? Yes. Can you? Yes. You too. 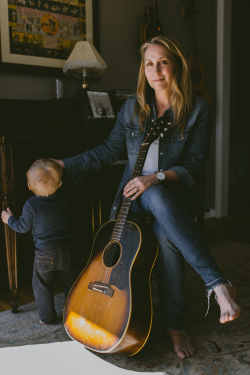 Concerts from the Closet feels like a love letter to the fans that have helped her keep the balance. An invitation to come into the space where she lives, works, and is relearning how to create. A promise to show up, for her fans, and for herself, in a way that might otherwise feel just out of reach. “There are people out there that I haven’t been able to get to on tour, and I’m probably not going to be able to get there now that I have a baby, so I’m hoping this will be a chance for those who are actively engaged on my social media or mailing list or Patreon to be a part of something special.”

As a fan, these unorthodox experiences open the door for a different kind of dialogue. One that makes me take a closer look at the way I’m consuming music. How we’re all consuming music. And how we’re showing up for the musicians writing our anthems.

Behind every favorite song is a human being who spent time writing it. And money to record it. And more time and money to get it out into the world so that we could sing along.

Subscribe to Patreon. Buy tickets to see the live shows. Stop buying your vinyl on Amazon and go straight to the source. Stream your favorite artists all night long. Support their Kickstarter campaigns. Subscribe to their mailing lists. Tune into their Concert Windows.

You can find Amy Speace in her walk-in closet on the first Monday of every month, playing music for fans from all around the world, with a new guest (or two) each month,  wearing sparkly show clothes for the hell of it, trying on real hats and talking about the balance of wearing other proverbial ones, all down the hallway from her sleeping son, baby monitor in tow, because Both/And.

The next Concert from the Closet is next Monday, May 6th, at 7:30pm CT with special guest, Megan Palmer, and you’re all invited.

Amy Speace is a singer/songwriter, timeless and classic, and a bit out of her own era. “She has one of the richest and loveliest voices and her songs are luxuriously smart,” writes Craig Havighurst (host of Nashville’s “Music City Roots”). “She’s profoundly personal yet also a bit mythic.” Amy's new album, Me and the Ghost of Charlemagne will be released worldwide on Sept 6th. Stay in touch via on Instagram, Facebook and Twitter for updates on all things and become a tracker on Bandsintown to catch a show near you.

Laura Schneider is a digital + film photographer based in Nashville, TN with a deep love for people and a passion for storytelling. Her work often focuses on issues of social justice, human connection, and women’s empowerment, celebrating the resilience of the human spirit in all its many shapes and sizes. A musician herself, she is always on the lookout for ways her passion and appreciation for music can intersect with and serve other musicians with powerful stories to tell. Say hello at lauraschneiderphoto.com or on Instagram.