Celebrity endorsements have long been a powerful force in the music industry, helping to propel certain releases on to massive success. Now, thanks to Cameo, these gold stars of approval are easier (and cheaper) to get than ever before.

Celebrity endorsements can make or break certain releases, and in 2019, Cameo makes getting a celebrity to promote your music is easier (not to mention more affordable) than ever.

Every musician is different, but the ways musicians promote their music and performances are largely the same. Musicians will announce their upcoming event or thing through their channel or a music publication, and then they will continue to promote that happening until the big day arrives. There are, of course, variations in how this promotional period is handled, but most efforts boil down to text, still images, and the occasional video, all made by the group/artist.

Cameo offers an alternative option for promotion. The service, which launched in 2017, is a platform where fans can book personalized video shoutouts from their favorite celebrities, athletes, or influencers. The company claims its mission is to “create the most memorable fan experiences in the world,” and it does this by allowing consumers to purchase short clips recorded by their chosen celebrity that are curated to mention a specific event or happening.

Two common uses for Cameo are birthday and anniversaries. People hire their loved one’s favorite entertainer to record a short video where they offer congratulations or support or just say something funny. The clips can be downloaded and shared anywhere, and many are uploaded to the Cameo site so future consumers know what to expect.

Who can you hire on Cameo? There are seemingly hundreds of people to choose from, including Snoop Dogg, Jennifer Love Hewitt, and Gilbert Gottfried. Each celebrity chooses the price of their Cameo clips, which can range from a few bucks to $1,000. The talent also has the right to refuse or decline a Cameo request, which is important to remember.

A number of up and coming musicians have already leveraged the power of Cameo to promote their own endeavors. Recently, Michigan’s If Only, If Only bought a Cameo from Jackass star and skateboarding legend Bam Margera to promote their upcoming performance at BLED Fest in Michigan. The video, which you can view below, cost them just $65 to create: 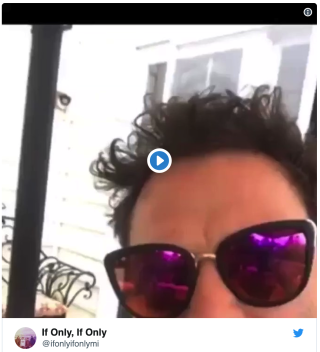 In less than three days, the video above has been viewed over 4200 times, which nearly double the size of If Only If Only’s Twitter following.

The band also posted the video to their Facebook page, where it has already generated more than 500 views.

The benefits to using Cameo as part of a marketing effort are numerous. For starters, people who recognize the celebrity are likely to watch the video, even if they may not be as familiar with your music. Additionally, the video can be shared on a number of platforms, and it provides a different voice (style) of promotion.

However, the usefulness of a Cameo video is directly tied to the person hired to create the promotional clip. If fans are unfamiliar with the talent they may not click or care about the content. Artists need to know their audience and what that group cares about before spending money on promotion, which is true in any promotional endeavor.

You can browse Cameo’s talent by heading over to the company’s official website. If you choose to promote through a Cameo clip, please send us a link! You can email james@haulix.com or reach us on Twitter: @Haulix.