Festival season has officially kicked off and while, as an up and coming band, it may be frustrating that you're not able able to play the festival circuit quite yet, there are number of other fun and effective ways to capitalize on a festival without actually gracing the stage. Here we look at five tips for making the most of the summer season.

With the first of the summer festivals having already kicked off, there’s only one thing left to do: sit back and enjoy the ride. Now, while it might not be possible to hit every single festival out there, it doesn’t mean that the onlookers like myself can’t revel in the festival fashion and standout performances via our Instagram feed, YouTube, and reports from our friends and favorite writers.

For bands, not being able to play the festival circuit just yet doesn’t mean you can’t still take advantage of one of the most exciting times in music—there’s still so much you can do for your band during this incredible time of year. In fact, I kind of like to think of it as the Christmas season for the music industry. Everyone is excited, in a great mood, and eagerly anticipating what gifts each new fest will offer.

It’s the perfect time to connect with new fans, get your music and message out there and start making a name for yourself!

Let’s get into it.

Want to quickly gain a few hundred fans and email subscribers? All you have to do is get out there and start talking. It’s that simple. You don’t even have to have a ticket to the festival to wait outside and talk to all the hundreds of thousands of fans in line who are hyped up and excited to see their favorite bands. All you need is a pair of headphones, your music on your phone or tablet, and an easy way for fans to sign up on the spot for your mailing list.

All you have to do is go up and down the line approaching fans. Start chatting them up about who they’re most excited to see, what their favorite songs are from that band, whether or not they’ve been to this festival before, etc. Put simply, just engage with them and show them you care about what they have to say. Then, once they’re comfortable, you can transition to something like,“well, hey, we kind of sound like X and we just released our new album—would you like to hear it?” 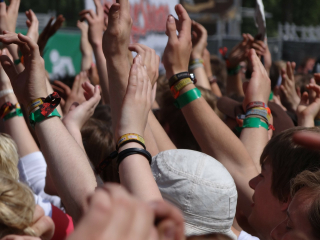 This is honestly one of the oldest methods in the book, and it genuinely works wonders. Think about it—how many times did you stand outside Warped Tour and have at least 3 different bands come up to you and tell you who they are and ask you to listen and check them out at 3pm on the Ernie Ball stage? Even bands who are ON festivals know they’re not too good for this kind of grassroots effort!

Document your own festival adventures

This is a fun one if you can swing it. If you’re planning to go to any of the festivals, make a thing of it by documenting each one with photos, a review, and maybe even a few fan or band interviews if you can. Then, share that with your audience on social media and in your mailing list. It’s a great way to provide a little extra content, while also doing something really unique and giving those that can’t get inside the festival a look at all the action.

One time, I had an artist I was working with, Traveller, do just this. He went on a mini tour of festivals in Europe, and not only wrote about each one for his mailing list and blog, but also took his guitar into the ones he could and performed in the campsites. I always thought that was such a clever idea, and I looked forward to reading every entry.

Summer can be an excellent time for creating and marketing new merch. Everyone is in a great mood, people seem to have (or think they have) extra spending money, and it’s prime time for t-shirts, koozies, branded water balloons, and whatever else you can think of. Because of the unique feel and nature of festivals, if you create merch that corresponds with the festival, you can create something really special.

For instance, it can be as simple as creating merch that’s fun, colorful, playful and reflects that carefree festival vibe. It can be something your fans would want to actually wear or use at a festival like a fitted tank top, custom sunscreen, branded water bottle, ice pack, mint or gum packs, etc. Try to stay on brand while thinking outside the box. Think about what you’d like to have on you as a festival essential—then design it!

Set up shop on the festival grounds

If you can make room for it in the budget, setting up a tent on the grounds of a festival can be such a fun way to get in front of new fans. Bring some of that new, exclusive run merch to give away and sell, and make sure your tent is inviting with something like a roulette wheel (for free stickers/sunscreen/photo with the band/water/etc) and you’ll have new fans wandering over for the sake of curiosity—by the end of it, you’re bound to have acquired hundreds, if not thousands, of new fan email addresses to follow up on in the coming days.

Start your own fest

If you’re feeling really ambitious and you know the ropes, you can even consider putting on your own local festival. It doesn’t have to be anything as huge as the major festivals we’ve been talking about, but even a full day event of the area’s top 10 bands playing in a local park, and selling spots to local advertisers like radio, clothing boutiques, the local coffee shop, etc, can be a really fun way to gain exposure while building your community and finding new fans.