AI Completes Schubert’s Unfinished Symphony, But Who Owns The Copyright?

While technology can solve a lot of legal problems, it's also capable of creating plenty as well, as evidenced in the recent instance of artificial intelligence being utilized to complete Franz Schubert's unfinished Symphony No. 8. – raising the question of who exactly owns the copyright of this newly completed piece of music.

Whenever a new technology comes into play it may solve problems suffered by previous generations, but it also usually opens up new legal territory as well. Such is the case with artificial intelligence being used to help complete Franz Schubert’s Symphony No. 8, which the composer abandoned in 1822 after writing the first two movements. 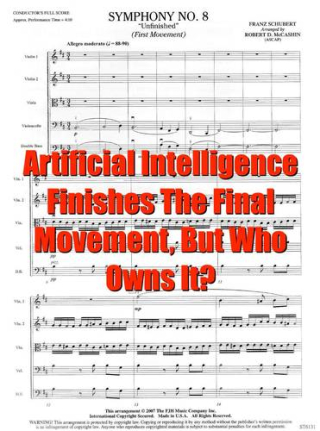 Composers and musicologists have puzzled over this for nearly two centuries now, but it took Los Angeles-based film and television composer Lucas Cantor, with the help of some iPhone-based AI from Huawei, to complete the the work. The cloud-based machine learning system analyzed Schubert’s composition style from some 2,000 pieces and made suggestions that would fit the unfinished piece based on what it learned.

Whether you think that the new movement is appropriate or not is a matter of taste, but the bigger question now becomes, who owns the copyright of new piece of work? Lucas Cantor or the software developer for the AI program used?

Cantor says that using AI is just another case of one composer learning some melodic or orchestral tricks from another, and maybe that’s true from a creative standpoint, but the ownership of the copyright blurs. Schubert’s works are in the public domain, but the new movement is not and that’s one of the things that’s making copyright attorneys work overtime.

This is becoming a bigger issue since record labels have already signed AI teams to write new music, so the issue isn’t going away anytime soon.

You can read more about the latest Schubert movement here. What do you think?