How To Eventize Your Band and Brand

Rather than broadly promoting a tour, artists like Garth Brooks instead 'eventize' every show, giving each performance its own personalized swathe of marketing leading up to the show, as well as producing a weekly livestream featuring a concert recap and debuting new video content. So how can you apply this practice to your own personal marketing?

Guest post by Jake Udell of Art Of Manager

Garth Brooks is the only artist with seven diamond selling albums and he is also currently on a record breaking world tour.

In becoming a musical icon, Garth and his team have utilized interesting marketing strategies to bring him closer to his fans and turn his brand into a constant “event”. 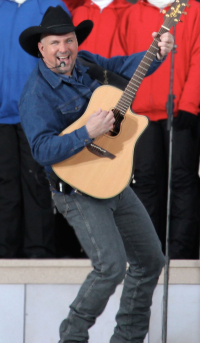 For one, every show has its own announcement.

Garth doesn’t announce a set of tour dates like every other artist. Each stadium show in each city has its own focus, its own flyer, and is broadcast far and wide across his entire audience as its own event.

Other artists who have done this in the past include Daft Punk and Adele.

Secondly, Garth has a weekly live stream called studio g, which incorporates show recap and music video debuts, and even prioritizes fan video questions for Garth to answer. The live stream takes place every Monday at 6 PM, making it an event fans can look forward to. He even sells products via livestream, breaking even more records by selling 420,000 vinyl sold in 18 hours.

It’s this level of consistency Garth has put forth toward his recording, touring, and his dedication to his fans that has turned him into one of the most successful artists of all-time.

What video series can your artist create consistently and growth with from cycle to cycle as their brand evolves?

What distinct ways can your artist announce their touring plans?