Streaming is introducing a larger and more diverse audience to classical music. "These new audiences bring with them new expectations about what classical music listening should be like and they present a major new opportunity for the classical market," writes Marl Mulligan. 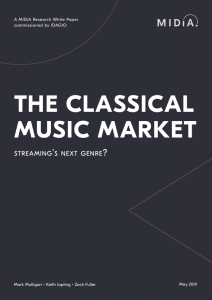 By Mark Mulligan of MIDiA and the Music Industry blog.

Classical music has long been viewed by many as a rarified genre that stands apart from other forms of music. While there is clearly something in that, something new is happening to the classical market: streaming is opening up a new, more diverse base of fans. Many of these are finding new entry points to classical music, such as hearing piano concertos on Relaxing Piano playlists. These new audiences bring with them new expectations about what classical music listening should be like and they present a major new opportunity for the classical market.

I am excited to announce the release of a report on the global classical music market that covers this concept and much, much more. MIDiA researched and wrote the report on behalf of classical music streaming service Idagio. (To be clear, this report is an objective and independent analysis of the classical market, not one of those ‘white papers’ that exists to champion the virtues of the client’s proposition.)

With that important caveat out of the way, I strongly recommend you download the full report for free here. It is packed with exclusive new consumer data that presents a unique view of classical music consumers and how they are engaging with streaming. The survey was fielded in the US, UK, Mexico, Sweden, Denmark, Austria, Germany and South Korea.

Here are a couple of paragraphs from the report that helps contextualise why classical music is gaining new relevance in today’s streaming world:

Classical music fans are a crucial music consumer segment that is too often overlooked in the mainstream of the music industry, and especially within the streaming market. However, the clear picture that has emerged in this report is one of a large and diverse group of consumers that include large volumes of mainstream music consumers who are also fans of other genres. The traditional image of Classical fans of only being older, traditionally minded and musically aloof does not stand up to scrutiny. Instead we see a group of people that are increasingly both youthful and digitally savvy, and that have wide tastes that go beyond just Classical music. This though, is not just a reflection of the diversity of these consumers but also of the way in which streaming is helping Classical music find a new, younger generation of fans.

Alongside this, streaming services risk getting locked in a race to the musical middle-ground in order to build the biggest audiences possible, with record labels and producers rushing to fill this overcrowded space with increasingly formulaic playlist-optimized songs. Songs that like fresh fruit are designed for quick, immediate consumption, not for longevity. This vicious circle of song optimization / playlist optimization may be the path of least resistance but it can ultimately lead to an unsatisfying overall music experience. Classical music provides an antidote to the algorithm-defined mainstream, and of the status update driven chaotic maelstrom that is digital life. Now we are starting to see the signs of a new generation of Classical music fans searching for a refreshing, reassuring alternative to the tumult and homogeneity of mainstream. 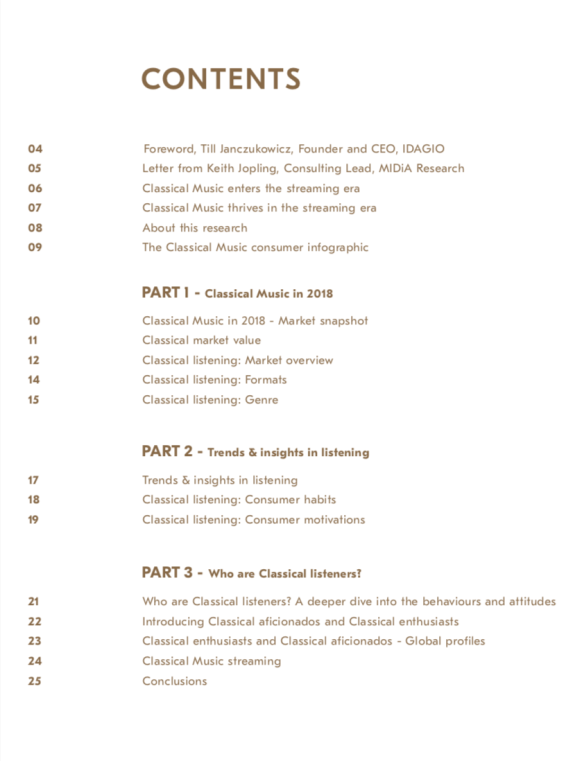