Marketing Your New Release On $0 Budget

While there are many strategies for doing things cheaply, marketing on an actual budget of zero dollars may seem untenable, but their are a number of creative ways to make a serious impact with your marketing that, while they can't replace paid advertising, can go a long way towards supplementing it.

Guest post by Angela Mastrogiacomo from the Symphonic Blog

Let’s be real—there are very few things you can do with a $0 budget and still come out on top. And in many ways, marketing is included in that. You can’t expect to go on Facebook and run an ad on your hopes and ambitions and no actual cash. You can’t buy merch to sell at your next show off your talent and wit alone.

But that’s not the kind of marketing we’re talking about today. Instead of talking ads and sales, numbers and figures, we’re talking about how to get creative and make a serious impact when you’re strapped for cash. Please note this is not meant to encourage you to never invest monetarily in your career. If you want to become a successful career musician you will need to invest in PR, ads, interesting merch, and a captivating live show (among other things) at some point.

Instead, this is meant to serve as a supplement to what you’re already doing, as well as a way to better connect with your fans.

That’s right, we’re going old school with a grassroots movement that is insanely effective (and one that I’d suggest you do even if you do have a ton of money to throw at your marketing!)

There are a few different ways you can do this, including the introvert friendly, but slightly less effective flyering of local coffee shops, record stores, and well placed telephone polls, to the more extroverted (and effective) method of chatting face to face with potential fans. Here’s how that one looks—it’s a strategy that local Austin band Shadow of Whales has used several times, each one gaining them more followers and fans.

3) Approach people in line, start a conversation about the band they’re there to see. For example “Hey, excited for Panic! At the Disco?! Nice! What’s your favorite song? Oh yeah, mine is XYZ!”

4) Casually mention your similarity to the artist and give them the opportunity to listen to your music via streaming it through your phone and the headphones you brought. (“well we sort of sound like Panic!—we’re actually about to release a new album—would you like to hear a bit of it?!”)

5) If they’re into it, ask them if they want to be added to your mailing list and be the first to hear the new album

Love it or hate it, social media is one of the best ways to engage with fans and market your music for zero dollars. Even better is if you have a mailing list that you’re actively nurturing and marketing to.

It sounds simple, and it kind of is (notice I didn’t say easy) but finding ways to be engaging, interesting, and foster a community that exists online and off is always going to be one of the best ways to get your name and your message out there without forking over thousands of dollars.

Oh, and even when you do have thousands to throw at this in the future, social media is still going to play a major role. Sorry friends, there’s no escaping this one.

This is a little bit different than just playing a show at your local go-to venue, because by playing (or even putting on your own) mini festival or event (like playing an acoustic gig at the farmers market) you’re getting your music out to a totally different crowd—and it’s usually one that’s already in a good mood because they’re out enjoying their Sunday in the sun.

Partner up with another emerging band 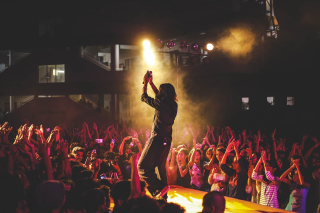 This is a great way to build those relationships while bringing yourself in front of a new audience. Partnering with another band that you either already have a great relationship with or who you want to create a new relationship to do something like: put on a joint show, share each other’s music on socials (and make it personal with a story), or collaborate in another way that’s unique to your brand and show. Like a few other options on here, it gets you in front of a totally new audience, while also giving you new content for your existing fans.

I love a good contest. When you can create a little bit of suspense and competition among fans, especially when it’s for something really exclusive (like a limited run vinyl) or creates an experience (like a scavenger hunt) it gets your fans excited about you, while bringing to light your new album/single/or just your existence as a band.