The global recorded music business brought in $19.1 billion in revenue in 2018, according the IFPI. By 2030, that number will grow to $45 billion, with streaming expected to represent $27.5 billion of the total, according to a new Goldman Sachs analysis.

The total number of paid music-streaming subscriptions worldwide is predicted to grow to 1.15 billion by 2030.

"After nearly two decades of disruption, the music industry is undergoing a massive revival," the analysts write. "Artists, labels, and publishers are cashing in on the growing popularity of streaming platforms like Spotify and Apple Music – and consumers are signing up for subscriptions like never before." 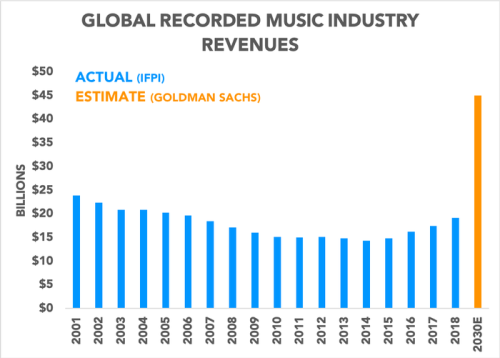 But even as streaming and its importance to the bottom line of record company grows exponentially, the average revenue per users is expected to fall 24.6%. according to Goldman. So while total revenue to labels and artists will grow, the money that is being generated per users – and this the revenue paid for each stream – will fall substantially. Why? Spotify and its competitors will continue to offer deep discounts to lure new users.

Spotify, Apple Music and China's Tencent will remain the dominant player.  But others like Google and Amazon will also gain market share.