What’s In A Name? 4 Tips For Picking An Artist Name

With all the pressures and responsibilities that come with being an independent artist, picking a band name can seem like a mundane detail, but the reality is that choosing the right band name is ultimately of the most important decisions you can make as an artist.

[Editor’s Note: This article was written by Ryan Owens, TuneCore’s Lead Agent for Video Monetization. Ryan’s experience on the TuneCore Operations team over the years has made him an expert in the important relationship between independent artists and the digital stores and streaming platforms they sell their music on. Here, he’s written some important tips for artists settling on a name, and the impacts this decision has on the career ahead of them.]

Being an independent musician can feel pretty daunting. Not only do you need to write and record the actual music, but more and more independent artists are finding themselves playing the roles of tour manager, publicist, and more.

With all the hard work you find yourself juggling, choosing the perfect artist name can feel trivial by comparison—but it’s actually one of the most important things you do as an artist.

Your artist name is often somebody’s first impression of you, even before they hear your music. Picking the right name is important but it can be tricky, and there are some common pitfalls to avoid. Luckily, we’re here to help you make sure your artist name is the best it can be.

1. MAKE SURE YOUR NAME IS EASILY SEARCHABLE

One of the first things most people do when they hear about a new artist is Google them. Being Googled as a musician is inevitable. Whether it’s a new fan or a venue you’re trying to play at, you want to make it as easy as possible for them to find you online.

Before you settle on a name, try Googling it and seeing what comes up. It doesn’t matter how cool your idea for a band name is, if it’s also the name of a world famous restaurant or a popular movie, you might never become that name’s top search result.

You should also be careful when picking artist names that are common words or phrases, like “Sunshine” or “Ferris Wheel.” If you want to do this, consider tweaking the spelling to make yourself more searchable (think P!nk or 6LACK).

Names should be easily searchable, but they shouldn’t be chosen with the intention of manipulating your searchability within stores.

If a major goal is to write and distribute a particular genre of music that streaming subscribers might look up more generically (as if it’s a playlist), you should still avoid picking an artist name like “Relaxing Meditation Sounds” or “Marimba Remix.”

It can feel tempting to pick an artist name that you expect people to already be searching within stores, but this practice is frowned upon. Not only can an artist name like this delay your release schedule by getting held up during the distribution process, but stores can—and do—refuse to accept releases with artist names that are too generic.

What’s more, names like this often fail to set you apart from others who make similar music. It’s best to pick a name that makes people remember you once they’ve heard it, as opposed to one that’s generic and forgettable.

3. DON’T BE MISTAKEN FOR SOMEBODY ELSE

Take care to avoid names that are already being used by somebody else, or are so close to an existing name that they could mislead fans. The last thing you want is to be confused with another artist. This can result in legal troubles.

Look no further than The New Yardbirds, a rock band who were pressured to change their name, eventually rebranding as Led Zeppelin. Everything worked out alright for them, but sometimes a sudden renaming can have an irreversible negative impact on your band’s brand. And if you’re lucky enough to avoid a lawsuit, you can still expect to deal with plenty of issues from digital stores. 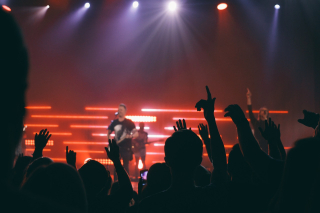 Even if you share a name with an artist who has a relatively small following, you run the risk of artist mapping issues: having your music incorrectly placed on the other artist’s page when it’s first delivered to stores. While there are ways to prevent this from happening (and to fix it when it does), your safest bet is to avoid choosing a name that’s already in use.

If your artist name can be confused with that of a big enough artist, digital stores can even deem it too misleading for your music to go live. In these cases, stores might go so far as to hide your release from appearing on their platform, or make you change your artist name to be less misleading.

More importantly, it should be a name you’re comfortable committing to for the long haul. Changing your artist name after you’ve established yourself is a pain, both for you and for your fans. It’s best to use one completely consistent name.

For one thing, this means deciding up front how you want your name to be formatted. The more meticulous you are now, the less chance there is for you to change your mind later. Are you capitalizing the first letter of each word in your band name? Have you decided if it’s “Jen & the Tonics” or “Jen and the Tonics?” Are you sure each word is spelled correctly? If something’s spelled incorrectly, is it intentional? What about symbols in place of letters?

If you start spelling, formatting, or capitalizing your name inconsistently, your discography looking sloppy will be the least of your worries. Fans and press alike won’t be sure how to write your name. More importantly, you need to make sure to list your name identically each time it appears if you want all your music to appear on the same artist page in stores

And when it comes to changing your name partway through your career, it’s not as simple as it sounds. Rebranding yourself takes effort, and can confuse not only fans but also digital stores.

Changing your name isn’t impossible—popular artists like Noname and FKA Twigs can attest to that—but it can be hard work. You’ll need to make sure that any music you’ve previously distributed is updated to reflect your new artist name, so that your discography still all appears on one artist page in stores.

As long as your artist name is searchable and won’t create issues in digital stores, what matters most is that you’re happy with it. Your music is your art; your artist name is simply part of the package that you wrap the music in when you’re ready to present it to the world. As long as you like your name, and it avoids the issues we’ve talked about, you’re in great shape!