4 Ways To Build More Content From Your Music Videos

Creating a music video can be a complex, lengthy, and above all expensive endeavor, meaning you should work to get as much out of the end product as you can. Here we look at four clever ideas for how you can utilize elements of your music video to create other valuable content you can apply to additional promotional efforts.

Filming a music video is a costly, complicated endeavor which can take days, or possibly even weeks of planning and preparation, so you want to make sure you get as much out of it as you can. That means you shouldn’t simply upload the visual, tell your fans it’s arrived and move on.

Instead, why not make more content out of the pictures you took and the video you shot, all of which can be valuable, whether you realize it or not.

Here are four ideas you may not have thought of that allow you to get more content out of your latest music video.

People love a sneak peek at what was going on behind the camera, and the more you’re willing to give them, the more they will consume your content in whatever form you share it.

Make sure you have someone taking pictures and videos of everything happening pretty much throughout the entire music video shoot. You can ask a friend to join in on the fun and snap content, or you and your bandmates, as well as whoever is directing, can take turns capturing some behind-the-scenes pics and videos.

You don’t need to film the entire hours-long process, but the more you have to work with later, the better. You’d rather come out the other side with too much to choose from than not enough, trust me!

This is something I suggest you do not only when you’re shooting a music video, but pretty much all the time. When you’re writing songs, rehearsing, recording in the studio, setting up for a show, traveling to a gig, and so on. People really do enjoy behind-the-scenes content, and it’s one of the best ways to fill gaps on your social media calendar in between posts that must go up at certain times.

These don’t need to be professional-grade snaps, so don’t hire anyone to help you here! Save your money and stick with the camera on your iPhones, which will do just fine!

Social media is all about reaction memes these days, so if you’re not already responding to your friends and fans with them, you need to get on it.

These funny pictures taken from popular TV shows, movies, and music videos (the key here) aren’t just frivolous and a passing fad, they’re now a new way of communicating with others, and they’re not going to disappear anytime soon.

In addition to using the most popular memes of the day, you can also get in on the fun with your own face and those of your bandmates, but you’ve got to make sure you do it right. Don’t just start posting random photos with funny captions and hope it works—actually think about it! If someone is caught making a silly expression in a behind-the-scenes clip, what does it remind you of? Maybe there’s one second in a music video that makes you think of another time you’ve made such a face.

I won’t sit here and tell you how exactly to make memes work, since it’s all on a case-by-case basis, but I do suggest you at least attempt to go this route. If you do it right, you can point your fans, and those who see these memes who might not already know you and your work, to the videos they came from, which could help you gain some new followers and rack up streams.

This is similar to the item above, but I wanted to make it separate since GIFs take a bit more work than still image memes. With a GIF, you have to find an online video cutter or a program on your computer where you can clip a few seconds from a visual.

It’s not nearly as difficult as it may sound, especially not now that there are many ways to do so in just a few seconds, so please don’t be scared off!

Using reaction GIFs from your own performances, behind-the-scenes content, and music videos works in much the same way as reaction memes, in that it needs to feel organic, it needs to be funny, and it can’t be forced! 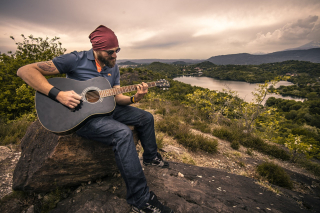 If you’re shooting your new music video in high definition, which is now easier than ever thanks to improvements in technology, chances are you may be able to find some excellent shots that can stand alone as pictures.

You may want to post these stills either to promote the upcoming video, to tell people it’s out, or to remind your fans to watch it again at some point. Also, if they’re really amazing pictures, you may be able to post them whenever with a simple caption or nothing at all.

Excellent shots are excellent shots, and people won’t mind if they’ve technically already seen it in your music video if it’s powerful enough to stand on its own.