As Independent Venue Week kicks of its second year running, we look at four things you should know, including where the event got its inception, and which artists and venues will be participating.

Eventbrite powers some of the best and brightest independent venues, promoters, and festivals the world over — and we’re proud of it. The independent music business runs on our technology, and we’ve allied with Independent Venue Week for a second year as its exclusive US ticketing partner. Together, we salute the venues — and their tireless staff — that provide space for emerging artists to grow in their craft.

“We’re the technology that powers many of the independent venues across North America, and we’re fired up to be partnering with Independent Venue Week for the second year. These venues and promoters work tirelessly day in and day out to bring great musicians to fans around the country, and we’re proud to partner with an initiative that provides acknowledgment and support for this critical part of the live music industry,” says Andrew Dreskin, Eventbrite Adviser and Ticketfly Cofounder.

In partnership with Independent Venue Week, we’re deepening our commitment to these bastions of local culture. Here are 4 things to know about the week ahead.

1. It got its start in the UK, but launched in the US last year

Independent Venue Week launched in the UK back in 2014, and debuted in the US in 2018 — in partnership with Eventbrite. Taking place this year from July 8-14, the weeklong event has grown with each passing year, highlighting and celebrating spaces across the country. The concert series, carefully curated by each participating venue, is IVW’s main event.

2. More than 80 venues in over 50 cities are participating

After just one year, Independent Venue Week exploded in size from 20 venues in 20 cities to 83 venues in 53 cities (and counting!) throughout the US in 2019. “We’re incredibly excited to see this initiative continue to grow after its successful first year,” says Rev. Moose, Managing Partner of Marauder, the producers of the US event. “These critical, open-minded spaces drive their local music markets. Independent Venue Week is an opportunity to build camaraderie and community through a week of shows.”

3. Two-thirds of the participating venues are Eventbrite partners

Independent Venue Week represents the best American independent music venues, spanning everything from legendary, storied institutions like the 9:30 Club in Washington, D.C., to younger rooms like ONCE Somerville in Somerville, Mass.,  and the newly-renovated historic White Eagle Hall in Jersey City, NJ. 55 of the more than 80 venues participating are part of the Eventbrite music community — more than two-thirds. Check out the full list of participating US venues.

4. Breaking and established artists from all over the world are performing. 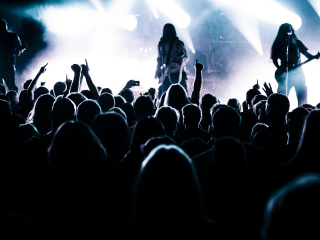 Throughout the next week, you can catch hot-ticket performances from DIY darlings Soccer Mommy at The Broadberry in Richmond, Va.; Australian garage-punk outfit The Chats at Texas mainstays Paper Tiger, in San Antonio, and North Door in Austin; and Welsh experimental songwriter Cate Le Bon at Portland, Ore.’s Doug Fir Loungeand The Crocodile in Seattle, Wash. Elsewhere, punk rockers Authority Zero return to The Rebel Lounge in Phoenix, Ariz. for two nights in a row. “We’re taking it back to the place where we played our first official show, 25 years ago. It may have a different name, but the nostalgia’s the same,” says Authority Zero’s singer and songwriter, Jason Devore.

Does supporting independent venues and developing artists matter to you? If so, discover Independent Venue Week’s 2019 US shows in your area, and catch a concert near you.

Andrea is Bay Area born and raised who frequents the word "Hella" in her vocabulary. She spends most of her free time discovering new music and going to shows, along with following fashion, pop culture and makeup and marketing trends. She is creative in many aspects but doesn't tie herself down to any one hobby. She is also always on the hunt for breweries with sour beers.