Why ‘Fake It Till You Make It’ Is Smart Advice

With a few important exceptions, nobody likes a loser. This is doubly true for those musicians looking to cultivate a following via social media. Here we look at how artists can present a successful-seeming before without also coming across as inauthentic.

People like shiny new things. Whether it’s a new car, a dream vacation, or a new piece of equipment, people love to show the world that they’re “winning.” And others will latch onto the “winners” in the hopes that they can have the same life.

A great example of this (somewhat flawed) human mentality is social media. The accounts with the most followers usually belong to entertainers and “famous-for-nothing” socialites (e.g., Kardashians, Hiltons). Why do hundreds of millions of people follow humans they don’t even know? Sometimes it’s because we’re actually fans of these people’s work. But overwhelmingly, it’s just because, well, everyone else does it!

Celebrities live a life most people can only dream of — carefully curated by professionals to show you only the best of what they want you to see. Whether real or fake, the masses gravitate toward these accounts as they would to a shiny new object.

No one wants to follow a loser. No one wants to go into business with someone who isn’t doing well. Why would they? People want to see success, a strong track record, the overwhelming support of a fan-base. And everyone wants to jump on the bandwagon of the next big thing.

This is why “fake it till you make it” is the best advice for your music career.

Now, I don’t subscribe to the idea of being an inauthentic individual. My approach comes from a business perspective of creating a brand around your positive, high-quality attributes. People want to see more of these and they will gravitate toward them. A well-crafted public image will help you get ahead, by bringing others onboard with what you’re doing.

I have watched too many up-and-coming artists use the internet to beg people to love them and listen to their music — then berate their fanbase for not showing the kind of support they’re looking for, monetarily or otherwise.

But here’s the truth: No one wants to see you squirming or suffering. It’s not cute, it’s not appealing, and it’s certainly not making us more likely to get down with whatever you’re doing. Hearing about your struggles is only cool when you’ve made it out the other side. 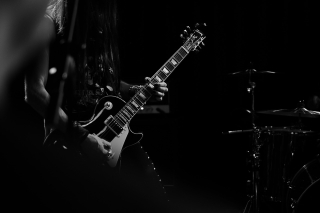 Would you spend $29.99 on a hardcover book by someone who is currently a struggling musician with nothing to show for it living in their parents’ basement and slinging frappuccinos on the 5 a.m. shift every day? Methinks not. But would you spring for a book by someone who started that way, worked their ass off, and became the head of a multi-million dollar empire selling out tours all over North America? Now that’s a different story.

Why? Because you can learn from this person. Because their story is interesting and appealing. Because you may want to be like them, do what they’ve done, or subscribe to their way of thinking. This is because they’ve won. And as much as you may not want to admit it, you have an ingrained human desire to attach yourself to success.

This is where the “fake it till you make it” comes in.

What does it mean to you to “make it”? What does that look like? Feel like? In the shiniest moments of your everyday life, those brief (though fleeting) moments of “making it” happen all the time. Are you capturing them? Are you even aware of them while they’re happening?

I’m not telling you to buy a watch you can’t afford just to look like you’re making money. I’m telling you to focus on your positives and be aware of your goals so you can work your way toward them and broadcast your journey.

For example, do you have a music release coming up? Great. What are you going to announce it and celebrate? How about a launch party? It doesn’t need to be fancy. It just needs to involve some important basics. Find a place you can pack. Then get some press. For instance, you could pick a worthy cause you care about and donate a portion of the evening’s proceeds to them. There. Now you’ve got a press story on your hands.

Once you’ve got some media news coverage, a packed house, a live performance broadcast over social media, and friends sharing their experience, you’ll officially look “legit.” And that’s only the beginning.

Look the part. Act the part. Dress the part. That’s when the opportunities will come knocking.

People want to see you winning, and even if there are folks that don’t, your job is to make sure they stay interested in following your next moves. You need to start embodying the person and the life that you want to live.

This isn’t weekend behavior. This isn’t temporary. Get comfortable with always projecting the highest version of yourself. Show people that you’ve arrived at your destination, and convince them they want to come to the party.

If you don’t believe in you, who else will? Be mindful of your positives, put your best foot forward, and design the life you’ve dreamed of with tenacity. The people who matter will take notice, and your hard work will bring you closer to where you want to be — until “faking it” becomes a thing of the past, and “making it” is your new reality.