Getting More Engagement Out Of Posts Via Hashtag Sets

Using lengthy long ultra-specific hashtags might be fun and feel good to do, but will do little as far as actually picking up traffic is concerned. Hashtag sets on the other can make a huge positive difference in boosting the engagement of a post.

Not enough Instagram and Twitter users understand that hashtags have a specific purpose of helping other users find something in a search. That’s why vanity hashtags like #IhatetheDMV or #GoodbySadOldJob might make you feel good, but they do nothing to help anyone find your post. Not only are the type of hashtags important, but groups of hashtags known as hashtag sets, or simply hash sets, can be the key to making that post really find an audience. 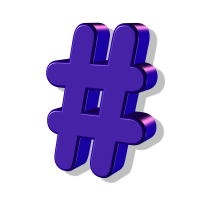 The simple rule of hashtags is that they must always be relevant to the post. Using a tag like #icecreamsunday isn’t going to work when you’re showing a picture of Disneyland unless there’s an actual ice cream sunday in the picture. We can take that idea another step by collecting groups of hashtags to use in a category of frequent posts which we can simply copy and paste as needed.

But how to find hashtags that are truly useful? There are a number of good sites available that can help. Hashtags.org and hashtagify.me are two that work well, but even doing a simple search on Twitter at search.twitter.com can turn up a host of good alternatives.

One of the best new sites to try is Smart Hash, which provides a number of useful features. First of all it shows you a heat map of the hashtags that you’re using now. The ones in red indicate they’re the most effective, orange less so, yellow even less, to one in gray that indicate that they’re not very useful at all.

Next the app lets you do split testing to give you accurate data on the hashtags that are actually being used on the same post. There’s also a simple search that shows if a particular hashtag is trending or not. The app then lets you collect the hottest hashtags into hashtag sets that you’re able to use the next time you post something that they’re relevant to.

This powerful tool will ensure that you always have just the right hashtags for all your posts.