In the wake of a recent rash of lawsuits surrounding Gibson Guitar, the company has formalized its IP enforcement approach into something called an authorized partnership program. While a step forward for fans of the company looking to create guitars inspired by Gibson, the new program has a long ways to go.

As I mentioned when we recently discussed Dean Guitars' pushback and counter-suit against Gibson Guitar's trademark lawsuit, Gibson CEO James Curleigh's vague declaration of a relaxed position on IP enforcement has calcified into something of an official corporate program. It's not all bad, but it's not all good either.

We'll start with the good. Gibson has decided to recognize that there are fans inspired by its designs who want to create their own guitars and even sell them on occasion. In recognition of this, Gibson is starting an "authorized partnership" program to allow those creators to build guitars without fear of legal threat.

The initial stages of the Program will see Gibson grant several boutique builders permission to create guitars based on the body shapes that it claims to own. The agreement involves specific terms set by Gibson, reports NewsChannel 5: chief among them that the boutique brands must acknowledge these shapes do indeed belong to Gibson.

“We’ve entered into some agreements with three or four boutique guitar companies, and basically, they actually love Gibson, and we actually love them,” Curleigh said in the interview. “We just have to have a conversation around where the lines are between shapes and names, etc. And what’s amazing is, as soon as we enter into those conversations, it leads to a collaborative, creative conversation. So it’s going to work basically, it’s essentially an agreement where they acknowledge: ‘Yup, these are your shapes,’ and we say, ‘you can use them.'” 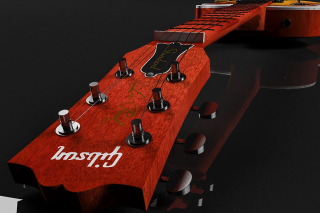 While it's a step forward for Gibson to enable these companies to create and build off of the inspiration from Gibson, you can already see hints of that old protectionist attitude creeping back in. In order to enter into this sort of agreement, first these companies must bow at the alter of Gibson by acknowledging that it holds trademarks on many of its designs. While that may be something approaching SOP for these types of partnership or licensing agreements, the current legal battle with Dean Guitars puts this very much in question. Whether Gibson does in fact hold valid trademarks on its most treasured guitar designs is subject to the outcome of Dean's counter-suit, in which Dean attempts to invalidate many of those trademarks entirely.

Regardless, putting so much emphasis on the acknowledgement that Gibson has these valid trademarks feels like the vestigial remains of the company's old protectionist policies. And, while Curleigh insists that he isn't trying to build this as a revenue stream for Gibson, the agreements do also allow the company to control how many of these 3rd party guitars get sold and to demand royalty fees, so there's that.

Add to all of that that Curleigh isn't exactly giving up litigation as an option, too, and one wonders just how much a shift in company culture this is all going to be.

“My last resort, I can tell you as a leader, is always going to be legal. But if a company or a brand leaves us, or me, with no choice, I have to follow that direction,” the CEO continued. “I don’t want to, but part of our brand and our business is intellectual property, and kind of half of the value of some companies are in that. We have to preserve and protect [our trademarks], but I think we can do it in a way that’s not confrontational, it’s more collaborative.”

These types of subtle changes can indeed have outsized effects, but it's all in the follow through. Again, this is for sure a step in a positive direction for Gibson, which has traditionally been very protective of its perceived IP. What remains to be seen is if this is really the cultural change Curleigh promised.