How Drones Are Helping Artists Build Better Experiences For Fans 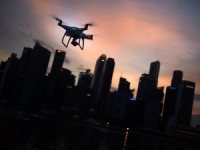 Growing exponentially in popularity, drones have become increasingly accessible to the average consumer, bringing with them a variety of exciting opportunities for those in the music industry, from recording live concerts to creating exciting aerial visuals and more

Drones have been a hot commodity for a few years now, after finally hitting the market and becoming accessible for the average consumer to purchase. These unmanned aerial vehicles have tons of potential uses, and have been used both recreationally and to deliver an upgraded experience in a variety of entertainment platforms.

There is often an awkward period with new technology, as marketing teams and technology companies look for the best way to apply them in different industries. In the music industry, drones have been found to add a lot of value when used to record live music performances from a better perspective, as well as to create awesome light visuals for audiences to enjoy.

Robotics and AI are now found in many industries, helping take basic tasks off the hands of humans in order to give people the opportunity to focus on more advanced and elaborate tasks that require critical thinking. Private drone sales are on track to break $82 billion within the first decade of sales, as more people become attracted to the creative entertainment potential they offer. Tech startups have seized the opportunity to apply the new technology to the music industry, in order to target music producers, marketing teams, and performance designers who are constantly searching for ways to take songwriting and performances to the next level.

In the music industry, drones have been used to create new video recording opportunities in concerts, allowing for shots to be recorded from higher and wider angles. This type of video content helps provide a new and larger perspective of an artist’s concert experience, which can be used to create more impactful promotional content, or content that can potentially be used for music documentaries.

Drones have also been used to amplify the concert experience for major artists, such as huge pop and R&B artist Drake, or famous metal band Metallica. In order to add some extra zing to their live performances, these artists have used drones from the indoor drone show company, Verity. Founded in 2014, this company was created to bring technology and the arts together by using tech to design influential light shows that add a new element for musicians and other performers to use as part of their performance. Drone light shows help to transport audiences to another world as part of a collective art and music experience.

They can also be used to enhance large-scale live performances, often by streaming the concert on big screens for concert goers who are in the back. With advanced cameras, drones can produce high-quality photography and videography opportunities that ensure no part of the audience misses the details of the performance. Both LED light show drones and those used to further broadcast the performance help increase audience satisfaction, which can make concert a more memorable experience for the audience.

Drones are also being used to enhance music videos for artists by creating mesmerizing aerial shots that take the videos to a cinematic level. Oftentimes, creative and elaborate music videos can engage audiences enough to take a good song to the top of the charts — and sometimes even make headlines. A bold and impactful music video can spark conversation and cause songs to trend on social media, and by using drone technology to get shots that were previously unattainable, music videos can be taken to a whole new level.

If you’re looking to use drones in your music, there are a couple ways to get started. The first — and perhaps most obvious — is to purchase a drone and start filming. There is a veritable smorgasbord of drones available on the market, and choosing the right one isn’t always the easiest of tasks. However, if you want to get some real cinematic shots, you’re going to want one with a really good camera. Drones that include a 4K camera because will offer the highest level of quality for videos. My Drone Lab has a great list of drones for filming. If you’re unable to do the drone flying yourself, you can hire a certified drone pilot to record beautiful video for your band’s portfolio and website, too!
Learning how to operate a drone and edit the video it captures isn’t for the faint of heart. If you’d prefer to dip your toes into the world of drones (rather than diving in), you can purchase stock drone footage for use in your music videos. You can find said footage at the big stock sites such as Shutterstock and Adobe, or at smaller specialty sites like DroneStock. Whether you capture it yourself or purchase footage, aerial shots can make for original video content, whether to use for music videos, online promotional content, or entertaining social media posts.

Versatility of Drone Use Across Industries

As drones become more common around the world and more valuable applications for them are found, they are slowly becoming the standard in many industries. In the entertainment industry, their use has been profound; drones can often be found flying above crowds at sports games and concerts. However, in emergency services scenarios, drones have been offering huge safety and life-saving benefits to personnel who may otherwise need to put themselves in dangerous situations to analyze the risk of natural or man-made disasters.

The impact drones have extends far beyond their use in music. However, each industry that uses new technology is able to find a home for these tools that can improve what they are able to offer, and each of these contributions matters. With each new use we find for technology like drones, we are advancing a cause. In the music industry, drones are being used to create impactful and awe-inspiring art that provide audiences with a brand new experience that can stir new emotions in individuals. Wherever they are used, drones help bring something innovative to the table, which is all we can really ask of modern technology.

Avery T. Phillips is a freelance human being with too much to say. She loves nature and examining human interactions with the world. Comment or tweet her @a_taylorian with any questions or suggestions.