Who Are Winners And Losers In The New Music Industry?

Regardless of who's getting the money, it is undeniable that streaming has made the music industry lucrative again. Now, as the business works to reinvent itself, are historically downtrodden artists finally coming out on top, or are record labels and management siphoning off all of the profits?

The music industry is one of the most lucrative in the world, contributing a staggering £4.5bn (UK Music, 2018) to the UK economy in 2017 alone. With one in eight albums purchased globally in 2017 produced by British artists, the UK plays a pivotal role in the sector, and it’s essential that we represent and care for our artists appropriately. We are all acutely aware of the extent to which the music industry has evolved over the last two decades. Over the last twenty years we moved from Records to CDs to MP3s now to streaming. We must consider the Walkman, one of the biggest innovations in the music industry, as a catalyst to the digital revolution.

It’s clear that money in the industry and music sources are constantly changing, but who are the real winners in the digital music industry? Are we finally seeing artists coming out on top after years of feeling undervalued, or are record labels and management pipping them to the post when it comes to monetary return?

How are music profits actually split?

From songwriters, to record labels and publishers there are numerous sources that must be accounted for when it comes to the music economy. Let me explain how it typically works.

Traditionally, during the first stage of making an album, it’s best practice to split profits 50/50 between the songwriter and publisher. Afterward, the songwriters share may be divided further, depending on the number of people involved in the creation of lyrics and melody. Then, the artist has the option of signing with a label, who have the power to take up to 85 percent of revenue. Alternatively, the artist can go it alone and release their own music, which has its own set of unique challenges.

If they do choose to sign with a label, most of the revenue from their album will be split between the retailer and label (usually around 70 per cent), leaving the artist claiming between 12 – 20 per cent and the producer receiving less than half of that, until any potential advance given to the artist from the label has been recouped.

What is evident from these percentage splits, is that the share of money throughout the music creation and distribution process is somewhat skewed, making the profits at the top end, continue to escalate, whilst those at the bottom of the chain, struggle to reap their just rewards and simply survive.

In the past, artists have struggled to reap what they musically sowed due to evasive contractual language and lack of insight on how profits are split. However, in today’s digital landscape, artists are becoming savvier. Although, the introduction of streaming has brought up a whole new set of issues that artists have never faced before. Artists are becoming more commercial in their thinking, now realizing that songs are their core ‘product’. 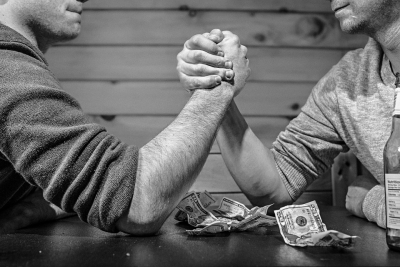 The streaming age: friend or foe?

The relatively new phenomenon of streaming music is a huge factor impacting the economics of the music industry, as well as how artists make their money. The majority of music today is listened to through streaming services, where users pay a monthly subscription to get access to all of their favourite songs – but the amount each service pays artists varies, once again impacting the overall profit split. Spotify for example pays artists a small sum of around 0.003p per song played.

Nowadays, it’s common practice for artists to have multiple revenue streams rather than relying on downloads and album purchases alone. Streaming is often thought of as the main source of recurring income for musicians, yet the reality is that it is not always sustainable. Touring and selling merchandise are often more financially beneficial for artists worldwide, along with correct licensing of their music for things like television or films.

As someone who has experienced some of these challenges first-hand, I can vouch for the fact that making a living as a songwriter and performer has become increasingly challenging in today’s climate. Artists must deal with splitting their income between all those involved in its creation, from publishing companies to music labels, lawyers and managers. Considering most music currently is being rented as opposed to purchased, some industry critics, would argue that signing to a label as a new act could be a bad move. By remaining financially independent, artists have full ownership of their music and publishing, and in theory have more autonomy in relation to their own funds and career path.

Having said that, the benefits of signing with a label are arguably more tangible and fruitful. They act as a safety blanket and source of advice and guidance in an industry which has more loopholes and obstacles than most. Allowing artists to focus on the core essentials; creating their chart-topping new music.

With the constant changes to the way in which we stream, purchase, consume and publish music, the future of this industry is unpredictable. Collection societies such as PRS for Music are a good source of key industry support for artists, and we must continue this on a global scale. Alongside the work PROs do, we must now start developing alternative sources to ensure fairness and transparency in the industry.

Audoo is a plug-in device that listens & captures audio and is set to revolutionise the music industry with technology that makes royalty payments fairer for artists, record labels and publishers. Audoo has already raised £600K in funding, with backing from Greg Gormley (co-Founder of Bink), Luke Heron (co-founder and CEO of Testcard), Tim Davies (Director of Ventures and Chief Innovation Officer of Co-op), Ed Matthews (MD of Jefferies) and Marcus Watson (CEO of Adoreum)