US Streaming Growth Is Slowing, But That’s Not A Bad Thing

Streaming growth is slowing down in the US according to the Nielsen Music Mid-Year Report.  But don't hit the panic button, writes Bobby Owsinski, There's still plenty of room for growth worldwide. 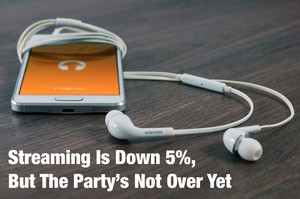 The latest Nielsen Music Mid-Year Report shows that streaming has actually dropped by 5% in the U.S., which is causing some unneeded panic to occur in some sectors of the music business. With streaming growth predicted to continue for the next 10 years, any sign of a slowdown seems to contradict industry pundits, but this slowdown, and the report, might not be as bad as the headline makes it seem.

For one thing, the second half of the year is widely considered the busiest time of the year for music. As a result, it’s likely that the the total streaming number will be higher by the end of the year. in fact, it’s expected that the total number of streams in the U.S. and Canada will even surpass 1 trillion!

Also, the Nielsen numbers only look at the U.S. and don’t account for the rest of the world. Asia and South America are picking up subscribers at a greater pace than North America at this point, as the service (as well as paying for it) is somewhat new in those territories. Meanwhile, North America and Northern Europe are now somewhat mature markets where you’d naturally expect for a slowdown as market saturation approaches.

This may be good news for the streaming platforms of the world, but music markets now look towards home-grown artists more and more, as each territory’s music scene develops. In fact, we’re seeing more chart topping talent in North America than ever before (K-Pop, for instance).

So the slowdown in streaming shouldn’t be seen as an alarm, but more as a gentle nudge that they heyday of big growth may be over, but the market will still continue to grow more slowly from here on out.