4 Mistakes To Not Make In Your Music Career

While the gauntlet of challenges musicians face has become a theme seen over and over again in popular culture and reality, many of these mistakes are as avoidable as they are devastating. Here we look at four common pitfalls artists stumble into and what can be done to prevent them doing so.

The archetype of the brilliant-but-jaded musician, beaten down and thwarted by life’s onslaught of challenges, is something we’ve all seen over and over again in popular culture. And that’s because it happens all the time in real life. Whether it’s a songwriter foolishly signing away the rights to their music or a promising band breaking up because of bad blood between its members, mistakes in music can be detrimental, but they are almost always avoidable in most cases.

Today we’re highlighting some of the most common music industry mistakes and giving pointers on how to avoid them.

1. Not Seeing Music as a Real Job

The belief that music is something you should only pursue when it’s fun, and then quitting when the going gets tough, really bothers me. But on the other hand, simply playing music as a path to success, and not because you love it, is also problematic.

Making any sort of impact through music requires an insane amount of work, as well as dedication, commitment, and inward-looking. From learning an instrument and writing songs to recording albums, booking shows, and embarking on tours, nothing good in music ever happens without a work ethic. Sure, there are times when inspiration for a song appears out of nowhere without effort or planning, but most momentum in music is generated by tedious non-musical work: writing emails, sticking to a regular rehearsal schedule, setting time aside each day to write music and play your instrument.

Music should be something you’re desperately passionate about if you want it to be your career, but if you don’t convert that passion into real work and goal-oriented planning, chances are nothing is going to happen for you. So set aside hours to get things done, make a list of goals, and start putting in the work whether it feels fun and rewarding or boring and forced.

This next mistake is a tough one to avoid and it impacts all musicians at some point in their careers. Whether you’re a solo artist or play in seven different bands, not putting work into maintaining your relationships is something that can end your music career in a hurry.

A bad relationship can look like anything from unresolved issues between you and a bandmate or collaborator, to being banned from a local venue in your hometown. Not prioritizing and maintaining your musical relationships can lead to major problems in your career, like people in your band quitting suddenly on tour, a bad reputation in your local scene, etc. Burning bridges seems logical in the heat of the moment, but they can come back to haunt you.

Close relationships in music are vital, and it’s quite common that you’ll end up where you want to go because of the people you know. So dust off those handy networking skills and go take your closest cohorts out for coffee! Keeping a musical relationship solid is hard work, especially when disagreements emerge — a good way to approach things is to prioritize empathy, logic, and patience over temporary rage or disappointment, which can easily lead to permanent damage.

3. Taking Too Much on and Burning Yourself Out 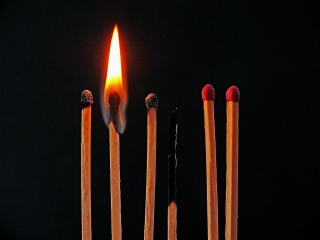 Some musicians don’t take their work seriously while others get themselves into big trouble by working too hard and taking on too much. Believing in your music and working hard is essential, but going into major debt over your music or spending month after month on the road away from home leaves you at risk of burning out, which can be hard to recover from.

A delicate balance between music career and everything else important in life needs to be struck by musicians who want to sustain their careers. For example, you might want to spend every waking hour making music, but if doing so isn’t making you money yet, it’s not a realistic option. And this balance doesn’t just involve money. Your close, non-musical relationships have to be prioritized as well and maintained if you want to continue to benefit from having friends and family as a safety net in your life.

Try as you might, you can’t be a machine that only thinks and cares about music. Sometimes sitting a tour out or taking a few months off of making music is the best thing you can do for your career.

4. Not Taking Money and Contracts Seriously

I find musicians make this last mistake all too often. It’s related to not seeing music as a real job. Musicians set themselves up for disaster when they don’t take their finances and contractual responsibilities seriously. Signing a bad contract has killed the careers of many musicians, and not prioritizing financial literacy even if you’re a DIY artist can be just as dangerous.

Some musicians believe that if they make great music, everything else around their career will be taken care of; and this is a huge mistake. The truth is that no one should be more concerned about the non-musical aspects of your career than you. This means paying attention to things like song royalties, licensing agreements, and the details of every contract you sign. You don’t need to be a legal expert to be a musician, but having a passive attitude about the less flashy aspects of your music career can lead to devastating consequences.