Apple Music has added the "Shazam Discovery Top 50" chart and playlist designed to "unearth up-and-coming songs from breaking artists."  The music industry has become increasingly focused on early identification of emerging artists and their growing importance in driving revenue growth.

"Want to be ahead of the curve? The global Shazam Discovery Top 50, powered by Shazams from around the world and updated once a week, compiles up-and-coming songs from breaking artists. If you hear a song you like, add it to your library." 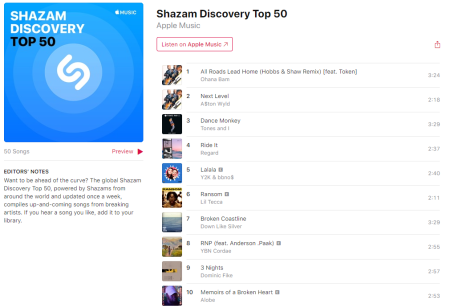 How Shazam Discovery Top 50 Is Calculated

Apple is short on specifics as to how the Shazam Discovery Top 50 is calculated, telling Variety that it uses “Shazam’s proprietary algorithms (to offer) a unique predictive view on rising artists and reacting tracks to Apple Music subscribers.”

According to Apple Music's announcement of the new chart: “The ranked songs are all at different points in their individual lifecycle and the majority of artists represented are emerging and up-and-coming. All are experiencing a level of momentum indicative of future potential of hitting the top of Shazam’s Charts, and show any or all of the following patterns: moving quickly through Shazam’s charts, growing rapidly, steadily and/or geographically.”

The chart is based on data from 11 countries: US, UK, Brazil, Mexico, Australia, Canada, France, Germany, Italy, Spain and Russia with more countries to be added “soon”.

MORE: Developing Artists By Touring Is More Important Than Ever, New Data Confirms