Indie distributor and publisher Cinq Music has inked independent record label Rancho Humilde to a worldwide distribution deal. The label targets 2nd and 3rd generation Mexican Americans in the US.

Issue of daily living as children of immigrants, cannabis legalization and issues at the Mexican border highlight the genre, known as a new wave of urban regional “corridos.” 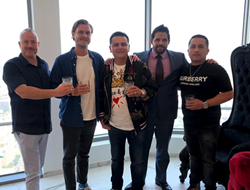 The announcement was made by Cinq co-founder and President Barry Daffurn. Terms of the deal were not disclosed.

“Cinq Music has been in Latin since our inception, and have been ahead of the curve in new genres like Trap Latino,” says Daffurn. “We were looking for the right opportunity in Regional Mexican and Rancho Humilde is the next age of the genre. It’s young, it’s urban, and has taken off outside the US and Mexico. Rancho and Cinq are well matched in our vision, and we think non-traditional when it comes to marketing and promotion.”

Rancho Humilde was founded by Jimmy Humilde, Roque Venegas and Jose Becerra. Some of their marquee acts include the most current and popular bands in the Regional Mexican genre: Legado 7, Fuerza Regida, Arsenal Efectivo, El De La Guitarra and Herencia De Patrones to a name a few.

As part of their non-traditional marketing efforts, the label has created and produced a nationwide tour that has sold out large market venues in Los Angeles, Denver, Austin, Houston and Chicago as well as small towns where few acts have massive drawing power. Irrespective of almost non-existent radio and television support, streaming numbers show the reach and influence of this new movement.

“We do things differently, we always have,” says Humilde. “The strength and popularity of our music is a reflection of the demographics of this country. Our fans speak English but love to listen to music that keeps them connected to their roots.“