Tencent Music has cut exclusive deals for China and then sub-licenses music to Alibaba, Baidu, ByteDance and other services. They have complaied that Tencent Music pays fees that are unreasonably high and passes the cost along to them, sources tell CX Live and MLex. Licensing songs from Tencent Music for use in China can be twice as expensive as licensing directly from major labels for the rest of the world, one source said.

The deals are further tainted because Sony and WMG have stakes in Tencent Music. Tencent Music responded to the investigation: "The news has not been officially released and confirmed, and there is no accurate source or description. It is untrue content."

UMG has confirmed that it has been questioned in the probe and it is cooperating fully. All three major music groups declined to comment further.

The probe comes just as China, long a haven for piracy, is warming to the idea of paying for access to music. Tencent, which has leveraged its billion social media users to dominate the Chinese online music business, is expected to be worth $30 billion by 2023, reports Bloomberg. 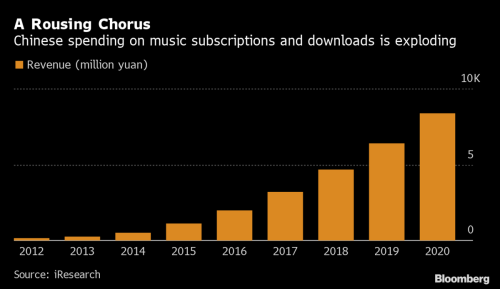