[UPDATED] OMG. It is festival fever season. Starting with Coachella (which I played) to Bonnaroo to Outside Lands and all the European ones we never hear from, there is a new favorite festival in town for me…..Outside Lands!

I am in love with Bay Area and the people it produces. Think tech mixed with reality and indie rock and rap,  and a VIP section spun by DJ Logic not by an Instagram model (no offense to IG models that are tight deejays.). Since I stretched myself from every corner of this fest from seeing Tony Danza to Sober Lands phone charger parties to hitting every after-party in the world, I wanted to write it all down just because.

What do you get when 200,000 live music fans and 70 popular musical acts descend on a 7×7 mile city for a music festival? Party time. Headlined by 21 Pilots, Childish Gambino, and Paul Simon, when the festival ended at 10 pm each night, the party was just getting started all across the city… 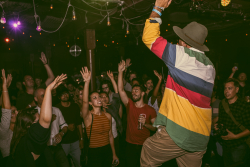 1. The Night Shows, Thursday, August 8th – Sunday, August 11th, San Francisco and Oakland.
Cheers to Another Planet Entertainment for their curation of post-festival night shows featuring Outside Lands artists all festival weekend long. How do you choose the best one? You don’t. You celebrate them all. Starting Thursday with The Marias, Amo Amo, The Neighbourhood, and Phosphorescent; Friday with San Holo, DJ Koze, NoMBe, and Brass Tracks; Saturday with Yaeji, Boyfriend, Cherry Glazerr, and Aurora; Sunday with Better Oblivion Community Center, PJ Morton, and Bob Moses. If you didn’t feel like splurging the $375 for a 3-Day General Admission ticket to the festival, or $795 for a VIP ticket, you could have caught a few of the OSL intimate night shows costing on average $25 each. How awesome is that?
2. Later Lands, Friday, August 9th at Neck of the Woods. Nestled in a quiet residential area in close proximity to the festival at Golden Gate Park, Neck of the Woods played host to an all but quiet much-anticipated event put on by local event guru Adam Swig. Featuring a debut performance from singer Jessie Berg, pop trance Austin artist Boy Sim, as well as hip hop artists  Fuze the MC, and of course me… Kosha Dillz (how could I not add myself into a sick show) the lineup was dubbed as eclectic as Outside Lands only later.  IT was one of my only sold-out shows and I got to play post cool psychedelic sounds of Amo Amo. All proceeds from the party benefited San Francisco Recreation and Park, the caretakers of Golden Gate Park, the same nonprofit festival headliner Paul Simon was donating his festival performance fee to. Yep. I was part of a good cause.  It was sold out.  It took me 30 min to find my car.  It was that good of a show
3. Travis Barker + Wax Motif, Friday, August 9th, 1015 Folsom. Featuring 18 DJs, this Outside Lands after-party could have been considered a musical festival in itself. RIP TRV$DJAM, yet Blink 182’s drummer Travis Barker still brought it during a rare DJ set. Joined by Mad Decent’s Wax Motif, the Australian g-house EDM DJ/Producer laid down trap and hip-hop style dance tracks. Along with the scattered cowboy hats of trending SF DJ outfit Cyber Rodeo. Party ended around. 3. It was epic.
4. Goldfish, Saturday, August 10th, Public Works. Coming off an energetic, sweaty set in the capacity filled Heineken dome at Outside Lands Saturday, South African favorites Goldfish kept the party going at the warehouse-style nightclub in San Francisco’s Mission District. Goldfish thrilled the crowd with their dance-inducing live set that combines live instruments like double bass, saxophones, keyboards, flute, and vocals with samplers, effects, and synths, featuring hints of Jazz and African beats. It was all smiles early into the AM, with support from another Outside Lands Alumni on the lineup, Jason Huber of Cherub. Their collars with Probcause are my favorite. That would have made it number 1 for me! 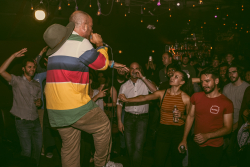 5. Toro Y Moi DJ Set, Saturday, August 10th, The Battery. Exclusive member-only club The Battery is known to throw an epic party from time to time, especially over Outside Lands Weekend. Future, Diplo, and The Chainsmokers all have rocked this private guest list only club during special events. Toro Y Moi’s Chaz Bear can add his name to that exclusive list as he laid down vibrating, pounding deep house beats to the trendy, scenester crowd.
6. The Free Nationals and Special Guest, Sunday, August 11th, The Emporium. Hmmm, I wonder who the Special Guest for The Free Nationals OSL after-party would be? The Emporium, a former church space in the NOPA district of San Francisco played host to the Free Nationals, Anderson Paak’s band, who vibrantly celebrated their show-stopping OSL performance as well as one of the band members birthdays. Paak and his band had closed out the Sutro stage Sunday with what may have been the best set at the festival. Outside Lands staff had to turn people away to other stages when the meadow became too “paak-ed” during their performance. Sure enough, soon after midnight, the man himself Anderson Paak joined his band as the special guest, hopping on drums and vocals for a few songs, including a Prince cover to an ecstatic audience before dashing out the back door flanked by security. To think I played shows with this guy just a few years ago and also the Free Nationals…is just mind-blowing.  It is inspiring to see it and feel it. Long Live Breezy Lovejoy.
all photos by Jho Villar @jvonly

Kosha Dillz is a forever upcoming artist that writes and hustles and raps and left to Tel Aviv right after Outside Lands to play a festival in the southern Negev Desert. It wasn't as epic as the Later Lands party at Neck of the Woods but but equally as inspiring.  Originally from NJ  and currently living in LA , he is soon relocating to Tel Aviv for a more international-based life.  Follow his gigs on bandsintown and  jam his tunes on spotify