Concert Crowdfunding As A New Way to Fund Shows – Is It Viable?

While a lot of industry focus is put on selling or – more often – streaming music, the reality is that many performers pull in much of their revenue from live shows. Given the costs and risks commonly associated with putting on live shows, more and more artists are looking into the concept of crowdfunding their concerts. So, can it be done?

So many musicians today focus on selling their music that it seems like the top way to earn money as a creator in the industry. Nonetheless, “performers generate around 75% of their income from live events and tours today”, states Forbes.

Putting on a show is pretty scary – it requires upfront investment to pay for the venue, staff, event promo, equipment rent, accommodations and transport if the band or musician are travelling out of town, etc. How does a musician organize a show if they are not famous or don’t have a skilled concert promoter interested to organize their event? It can get tricky.

Tens or hundreds of thousands of social media followers won’t necessarily convert into your live show visitors every time. As a result, some musicians, bands and managers have been trying to apply a popular crowdfunding model to concerts – resulting in the emergence of concert crowdfunding.

What is concert crowdfunding? 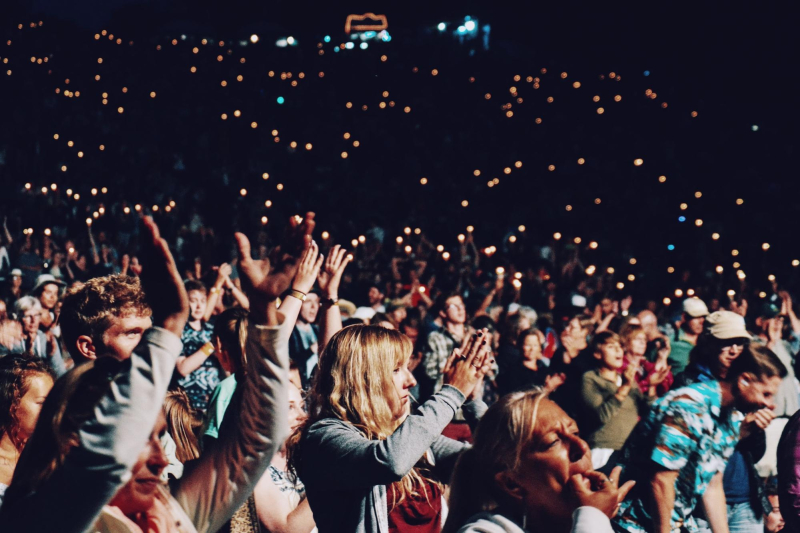 Photo by Ezra Jeffrey-Comeau on Unsplash

There are several ways to raise funds for your initiative – classic fundraising when you are looking for several big donors who would support your idea because they think it’s good for society and/or their image; crowdinvesting when you get a bunch of smaller investors contribute to your project on the premise that it will bring them profit; and concert crowdfunding where your own fans basically pre-order your show by contributing money to the project before it’s initial planning stage commences.

Obviously, concert crowdfunding seems at the very least more exciting for the artist as they can estimate how many fans will come to the event, while managers and labels can gauge demand for a particular creator without having to resort to less direct analytical tools.

What tools are out there to crowdfund concerts?

When you google “tools for concert crowdfunding”, several options pop up.

Not all of them allow to actually crowdfund anything, but some familiar names like Indiegogo and Kickstarter provide a workable set of tools. The latter aren’t industry-specific and will require you to carry out many of the steps manually or with the help of additional tools, but are there music-focused options?

Patreon allows you to raise money via subscription or per creation. Music-focused services like Bandcamp or Reverbnation only allow to sell your music, although you can announce an upcoming show on Reverbnation.

Upon our research, it appears that for money to actually exchange hands between fans and artists for the specific purpose of holding a concert, one would need to use either general-purpose crowdfunding platforms like Kickstarter and Indiegogo or industry newcomer Show4me. Let’s take a closer look at each of the platforms. 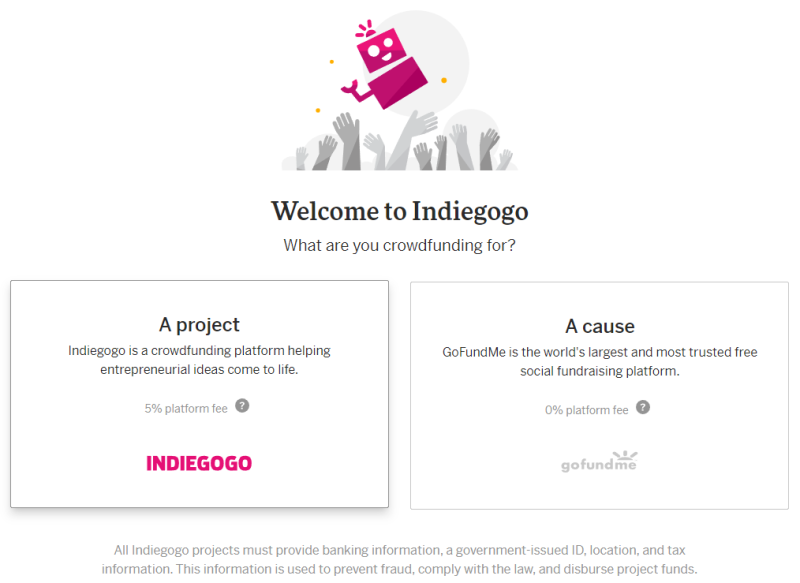 After you click “Start a Campaign”, you need to fill out your campaign page, including:

Indiegogo advises campaigners calculating their target amount to take into consideration that some backers may request refunds.

The top projects funded on Indiegogo were in tech, education, and film. 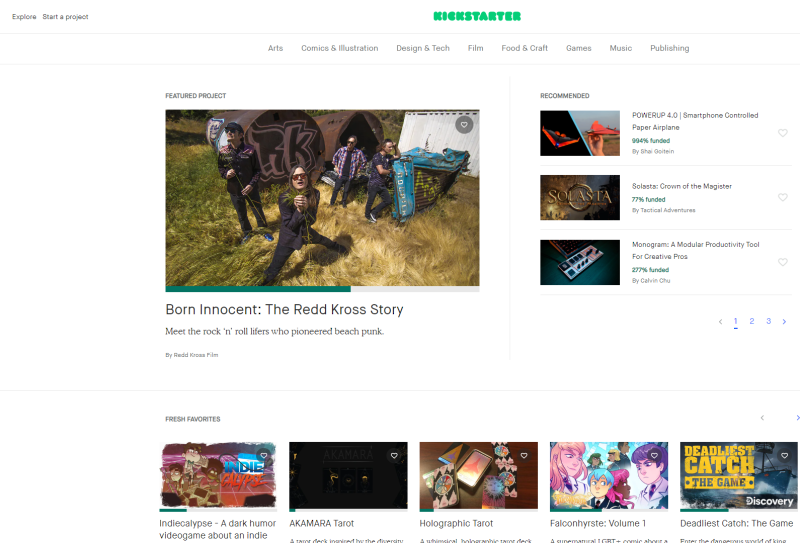 The platform offers a similar crowdfunding mechanism – you click “Start a project” and fill out your campaign page:

The top projects funded on Indiegogo were in product design, board games, film, and video games. 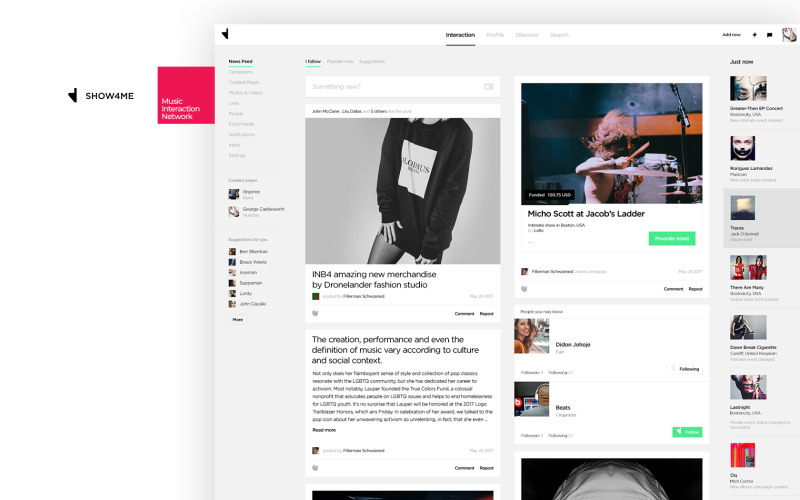 To launch your campaign in Show4me, you need to click “Create” and select “Campaign” option in the dropdown menu. Right off the bat, you are taken into the professional concert organization territory as the next step is selecting the type of concert you want to crowdfund:

These allow musicians to crowdfund smaller events starting 10 attendees, as well as “secret” events just for fans (private events are only accessible to the paying members of a specific Artist club – $1/year per club – on Show4me or via code).

After your campaign is set up, you can continue interacting with your fanbase in the Show4me Artist club, upload music so fans can listen, release teasers, discuss your upcoming show, e.g. the tracklist, title, video playback, sell your music, and share your creative process with your fans.

When the campaign reaches its minimum funding goal (“Confirmation point”), you are prompted to set the date for your show and ticket prices automatically go 40% up. At this point, you can receive a “Break even transfer” to start planning your show.

At this point, your fans get access to their automatically generated etickets. You don’t have to create and distribute them, and Show4me offers a free app for iOS and Android to scan the tickets on entry.

All the arrivals stats, complete with average age and gender distribution is immediately synced to your Show4me account. You can even track the battery of the ticket scanning devices on site in real time!

And the coolest part? Show4me is a network for artist-fan interaction, which means all your fundraising and marketing efforts won’t just be wasted on a single event – you can retain all your fans by continuing to engage them on the platform via your Show4me Artist club (fans can join both for free and with $1/year membership that also covers listening to all the music from the artist). 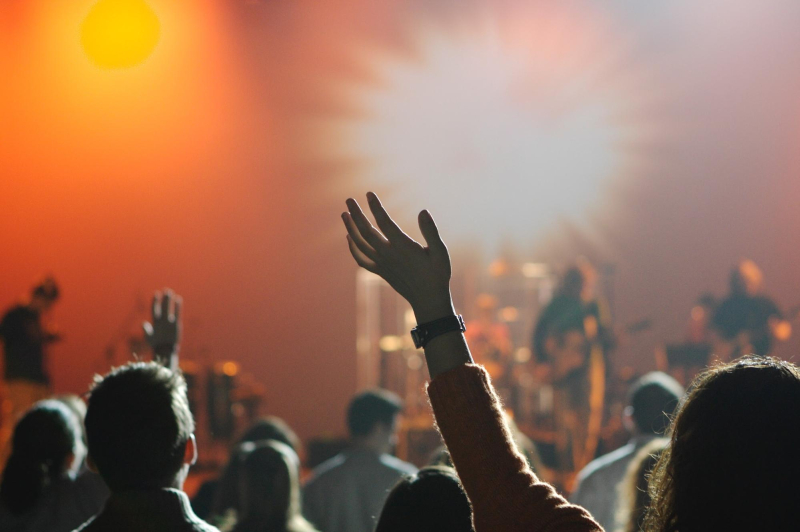 Photo by Ezra Jeffrey-Comeau on Unsplash

According to the IFPI, about 70% of live revenue is earned by 5% of the acts. This means that there are top performers that have gained momentum and popularity to guarantee ticket sales, while the rest may struggle to get their fanbase excited about an event in the same place and on the same date.

Crowdfunding your concert can enable you to hold more events and share your music with fans in the most intimate and creative ways, even if you are not famous. With the emergence of convenient online crowdfunding tools, it’s easy to pick one that will work best for your needs and host events as small as 10 attendees.