ReverbNation recently sat down to chat with storied UK record label Firece Panda Records, a UK label with an impressive resume and some promising new artists on the docket, about their work over the past 25 years, the challenges of operating as an indie label, what they look for in an artist, and more.

Fierce Panda Records has a storied and reputable history of putting out early records from some of music’s most prolific bands. The UK-based label has released early records from the likes of Coldplay, Oas*s, Death Cab For Cutie, and many more. Now in its 25th year, fierce panda has proven that it has the chops to identify and launch musical careers with precision and poise.

Fierce Panda recently signed The Comstocks to its iconic roster as a result of its latest ReverbNation Opportunity. The indie alt-rock band caught the eye of fierce panda thanks to their unique, hefty, and raw sound. By the looks of fierce panda’s current roster, as well as its impressive list of label alumni, we think The Comstocks are going to fit in just fine.

[SAVE THE DATE] The Comstocks’ newest single “Six Months” is releasing on October 4, 2019 on your favorite streaming services. Click here to pre-save the song.

With a quarter-century of experience under their belt, we thought it would be great to have a chat with the team at fierce panda and pick their brains on all things music. Learn what it’s like to run an independent label, what specific things can cause a great band to not get signed, and so much more in this delightful interview.

Tell us about fierce panda. How did you form? What kind of music is most important to the label?

The fierce panda label was forged by three NME journalists in a pub on Tottenham Court Road in London Town in 1994. We really quite liked scrappy indiepop / alt.rock, like a scruffy puppy dog with a wonky ear and a wired disposition, and we still do. But everyone (in the UK at least) says their favourite fierce panda albums are ‘Transatlanticism’ by Death Cab For Cutie and ‘You & Me’ by The Walkmen.

Do you have a funny or interesting story from when you were just getting started as a label?

Not sure if it’s either funny or especially interesting but the original idea was to release one record and call it a day, which is why we called the label something as stupid as fierce panda. If we’d known we’d still be here 25 years and 430 singles later we might have spent a bit more time on it.

Fierce Panda has a storied history putting out early records for Coldplay, Oas*s, and Death Cab for Cutie. Since those days, what has changed and what has remained unchanged about discovering new artists in 2019?

Well, pretty much the entire industry has changed for starters – considering fierce panda started on the eve of Britpop when decent bands could routinely get major label money and A&R support, it’s depressing to see just how hard it is for much more imaginative, creative guitar bands to get attention in the mainstream nowadays. Back then it was standard for a band to release a single on fierce panda and then sign to a larger label, but now the options to move on from us are sorely diminished by the majors’ misguided obsession over staring at streaming stats instead of actually focusing on the music.

At the bottom end of the discovery scale, however, nothing much has changed. Musicians send us great songs, we go and see the musicians play a (hopefully) great live set in some small east London dive, and we roll on from there towards more possible greatness. They may send Soundcloud links via email instead of cassettes to a PO Box nowadays and the venues may have changed over the course of 25 years, but the panda A&R essence remains exactly the same, for good or for bad.

The biggest struggles are the usual boring ones – dealing with artists’ manic expectations, suffering crippling cash flows, trying to comprehend an industry shifting shape on an hourly basis. That kind of thing. The list is endless really.

The favorite part? Standing with a pint of poor quality lager in the middle of a middling quality venue watching a moderately talented new band take their first wobbly wee steps into the limelight. I’d already been doing that for twelve years before the label even started, and it’s just as much fun today as it was in 1982.

What are some qualities that you look for when signing an artist or band?

A bit of charm, a bit of style, some nice tunes, some well-organised live shows, a tidy email, a bit of a fanbase. That’s about it, really. We never ask about digital statistics because we don’t care – we’re about dreaming, not streaming. (note to self: please never use those words again)

Is there something that can prevent a great band from getting signed?

An idiot manager, a lazy live agent, manic band expectations, a total lack of any work ethic. It’s another endless list, frankly. Although judging by some of the excellent bands who’ve abandoned their deals with fierce panda over the past two years I’d say the real modern killer is rampant impatience.

It doesn’t matter how many times we say it took Coldplay two years to get a deal or how Ed Sheeran had to release five EPs before anybody took any notice, some bands today are still desperate to take a shortcut to success, which simply doesn’t exist in the fierce panda universe. So even at our entry point level, great bands are falling by the wayside, sabotaging their possible careers in pursuit of the pointless.

What are some qualities that help you determine early-on if an artist/band is going to be successful? Unsuccessful?

I think if we knew the answer to that our A&R strike rate would be beyond sensational. It normally takes about six months of working with a band before you can seriously gauge whether or not they have a real chance in the big world, whether they can carry on applying themselves after that initial giddy rush of radio and blog attention around the first few releases has dissipated – that’s the tough bit, maintaining the momentum and enthusiasm when the potential riches seem to be moving further and further away.

I’d say Coldplay definitely had that drive, that work ethic to push on, propelled by some really good songs. But then again you can’t really base anything on Coldplay because they are so totally freakily enormous – for a lot of our other bands a really successful career could be perceived as releasing a couple of critically-lauded albums and headlining to 438 people in London. Not everyone can be as big as them.

How did you hear about ReverbNation and our opportunities for labels and artists?

I heard about ReverbNation via Kelly at End Of The Trail records, a fellow battle-scarred label trooper in the bloodied trenches of the UK A&R music scene who we collude with on a regular basis. He actually released a Comstocks single last year, which is always a good sign. So far we’ve released ace singles by the shoegazey Cuesta Loeb, the eletropoppy Tom Shawcroft and the zinging alt.pop of Hows Harry. 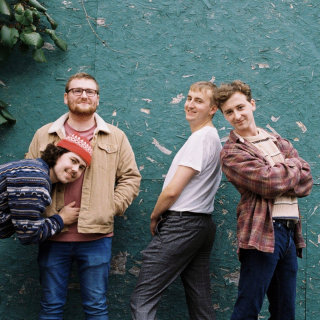 Thank you very much! What made them stand out? A bit of charm, a bit of style, some nice tunes…there’s just something really raw and visceral about them that’s really hard to define, which I always like. Poke me with a sharp stick and I’d reckon they’ve got a bit of Band Of Horses’ ragged country glory mixed with the slacker heft of Dinosaur Jr, but ultimately it’s just pretty darn good.

Do you have any big plans in place with The Comstocks yet? Can we get a sneak peek?

As they’ve already released the ‘London Pleasures’ single on End Of The Trail, we’re now looking at taking a step up by releasing a whole EP of material this time around, probably in the next couple of months.

How do you measure your success as a label?

There was probably a moment halfway through our lifespan (i.e. in the mid-noughties) when we would judge success by how many genuine album sales we had as we once again failed to bother the chart rundown, but then the internet came along and killed all that logic. Nowadays? It’s all about survival because the investment money at the entry point level – with the exception of projects like ReverbNation and a couple of indie labels with backing from giant brands – has pretty much dried up.

The upside of this is the old adage of great art being born from fiscal and cultural poverty, but that can be quite hard to explain to a band when they’ve just made $65 from streaming their EP, and 50 percent of that is going to the label, while Ed Sheeran has just bought himself another five tomato ketchup factories.

What can we expect next from fierce panda? Another 25 years of releases?

Not so sure about that. We might just squeeze out another 25 days of gentle chaos at this rate…