The Currency Of Deceased Rock Stars

In the wake of the passing of both Eddie Money and The Cars' Ric Ocasek, Fred Jacobs here reflects on the lasting value of Classic Rock, and how music from the 60s and 70s continues to accrue cultural relevancy even as the number of actual artists from the era dwindles.

Ever hear of the Cook Islands?

Don't feel bad, neither had I.  It turns out they're a chain of 15 islands in the South Pacific, politically connected to New Zealand.  Economically, they're limited because of their isolation.  Sure, there's tourism, agriculture, and also black pearls.  But when you live in a remote place like this, you'd better be creative. 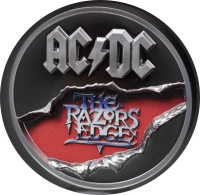 But they're onto something with a series of collectors coins (although they're spendable in the Cooks) honoring AC/DC.  These two new coins are actually part of a series of commemorative moolah honoring the band Angus and Malcolm Young formed way back in 1973.  These new coins pay tribute to “For Those About To Rock (We Salute You)” (a $2 coin) and “The Razors Edge” (a $10 coin).

Queen Elizabeth II is on the obverse of both coins.  Seriously.

But that shows you there's lasting value in Classic Rock collectibles, and frankly, just about anything new that's minted, printed, or released by those iconic bands we grew up with.

All this occurred to me when I read a bittersweet story in The Week by Damon Linker.  The title says it all:

“The coming death of just about every rock legend”

On the one hand, Linker extols the virtues of what many of us call the Golden Age of Rock, especially from the 60s and 70s.  It's what we now call Classic Rock.

On the other, he reminds us that virtually every revered rock star from this amazing period of time will be gone during the next decade or so.

Yes, a handful may be lucky enough to hit the age of 90, but as we're already seeing, that rough and tumble rock n' roll lifestyle has taken its toll on some of the best and brightest who left this earth much too early. Like many of us, Linker worships this music, but suggests that its Peter Pan quality was just a mirage; that reality in the form of mortality catches up to all of us, whether we're Glenn Frey, Prince, John Lennon, or Tom Petty.  The causes of death may all vary greatly, but the end result is the same.

And this line sums it up nicely  – for him, for me, and perhaps for many of you:

“Like all monumental acts of creativity, the artists were driven by an aspiration to transcend their own finitude, to create something of lasting value, something enduring that would live beyond those who created it.”

And that they did.  If the goal was to create art and culture that would outlive their fragile lifespans, they accomplished it – and then some.

That famous rebellious wish “Hope I die before I get old” is a fairy tale.  The guys most famous for singing it – Pete Townshend and Roger Daltrey are both in their mid-seventies, and Classic Du Jour's Judy Libow sent me an email this week, trumpeting their new single that will be released earlier next month, perhaps ironically called “All The Music Must Fade.”

Paul McCartney has far outlived “When I'm 64,” as has Neil Young and “Old Man.”  Many others like Mick and Keith continue to outrace Father Time – at least for now.

Linker concludes with that ominous line: “No one gets out alive.”

But is that really a surprise?  We intuitively knew this all along, even though some of us have had a hard time coming face to face with that reality.

And as it pertains to enjoying the music after our heroes make their final run and go off to Elysian Fields to hopefully rest in peace, we'll still be jamming along with their art, their souls, and their spirits. I was reminded of that last week when the latest to join the ranks of the Classic Rock departed, Eddie Money and Ric Ocasek passed away within three days of one another – just like that.

They both hit it big when I was at WRIF the first time.  And while I preferred the music of other bands, I felt a profound sense of loss last weekend.  These guys both represented an important part of my musical and radio life, and it caused me to pause and reread – and rethink – Linker's essay.

The photos on top of today's post are how I wish to remember them – at the top of their games, making one great song after another, and electrifying audiences at live concerts.  That's my prerogative as a fan.

And I think it's true for devotees of Michael Jackson, Elvis, Freddie Mercury, Frank Sinatra, and Mozart – we don't remember them as old, rundown, sick, and past their primes.

Our memories – while flawed by the sands of time – preserve the power of their music when it mattered most to us.

After all, we know what's become of classical music after the original geniuses who wrote those dynamic symphonies, études, and operettas passed on.  Tribute bands – better known as symphony orchestras – lovingly duplicate and honor every note and nuance of this music night after night, year after year, century after century. What will become of the music after the passing of this amazing generation of rockers?   Will it fade right along with the musicians, singers, drummers, and guitarists themselves?

Of course not.  It will be performed live, it will be enjoyed on the radio, cherished on turntables and mobile devices alike, honored on the big screen in musical biopics, and the old concerts will be shown on-demand on all our screens.

These are our memories, our lives, our Classic Rock.

We will enjoy it while we can, and in many cases, pass it on to our children…and their children.

I don't dread any of what's to come even for a second.  Yes, the deaths of these great rockers will be sad, and as Linker reminds us, we will mourn for them, and at the same time, we may even mourn a little for ourselves and youth lost.

But that's where I get off the “Magic Bus.”  Whether alive, dead, or in the case of Jim Morrison – perhaps mythical – I celebrate this music every day, whether these artists are in the here and now, or are fading memories.

And nothing's going to change that.  Ever.