In this piece, Mike Henry of Paragon reveals the impressive popularity which Urban Alternative has gained as  a public radio format, providing a blend of new and old hip hop, R&B, soul, urban, rap, and local music to the listening populace.

Last week at the Public Radio Program Directors Conference I presented research on the new Urban Alternative format for public radio.  The results from five U.S. markets show that the audience appeal of Urban Alternative is undeniably and overwhelmingly positive.  If Urban Alt were a stock, the recommendation would be to “buy now.”

To provide a public radio entry format for young and diverse audiences, Urban Alt is a new music format made possible by grants from the Corporation for Public Broadcasting.  The format is a new/old, familiar/unfamiliar mix of many music styles including Hip Hop, R&B, Urban, Soul, Rap and local music presented by local hosts who curate the music.  Just as important, these stations are active and positive change agents that make a real difference in the lives and cultures within their local communities.  There are two stations already airing the format, and both as a result of CPB funding: Vocalo in Chicago (stream here  https://vocalo.org/) and The Drop in Denver (stream here https://www.kuvo.org/on-the-air/the-drop-on-kuvo/).

CPB’s VP/Radio Erika Pulley-Hayes was on hand to provide her vision and CPB’s crucial role in supporting this new format, and The Drop’s Content Director Nikki Swarn was there to make it real from a local station perspective.  The audience reaction was as strong as the research itself.  As an aside, I’m constantly quizzed about Urban Alt from radio programmers and music execs who loooove this format.  It seems everyone loves Urban Alternative.  Now all we need are more station operators to “buy” the Urban Alt stock while the CPB is paying their way to be part of the future of public radio. 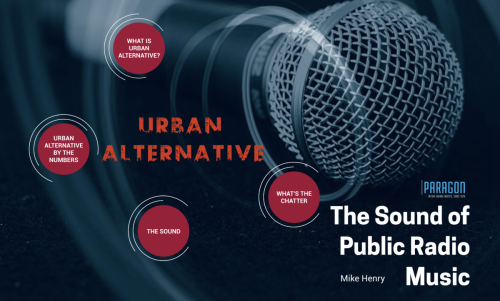 Here are some highlights from primary research conducted in Chicago, Baltimore, Houston, Norfolk and Denver:

This is not a niche format—

To get a visual for the format, check out Vocalo’s compelling video “This is What Chicago Sounds Like” here:  https://www.youtube.com/watch?v=AY01qf7uLc0&feature=youtu.be

If you want to dig deeper into the emerging story around Urban Alternative, you can see my previous blogs on the format here:

This Is What “Urban Alternative” Looks Like – Oct 2018
Urban Alternative to Get Tryout on Three Stations – Sept. 2018
Music Format Highlighting Hip-Hop, Other Genres Seeks Home on Public Radio – August 2017