Included in Bandsintown's new live music charts are 20 that offer a first-ever glimpse into early artist growth in 10 major US cities. Most artists first built a fan base by performing locally long before they were ever added to a Spotify playlist.

"Granular data at a city level really has never been available before in a meaningful way, which is why we never really saw a chart," said Bobby Oswinski of Music 3.0.  "The new Bandsintown charts address that and more." 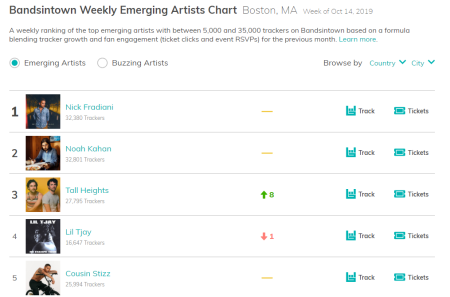 The Bandsintown charts measure growth in live music fan activity by tracking the 500,000+ clicks to ticket sites that the platform generates every day, along with tracker (follower) growth and other fan engagement. Both Buzzing and Emerging artists are measured alongside new fan growth from more established artists.

As part of an ongoing commitment to help emerging artists, Bandsintown, Bandsintown for Artists, and Hypebot will publish both weekly buzzing and emerging artist charts for 10 major US cities, including Atlanta, Austin, Boston, Chicago, Dallas, Denver, Los Angeles, Nashville, New York, and San Francisco, alongside monthly Worldwide and US emerging and established artist charts.

You can find the new Bandsintown Live Music charts here.