In this new essay, author Julian Tepper directly takes on one-hit wonders, and how the term can often negatively silo artists into a frequently mocked category of performer. Dear One Hit Wonder,
You and I have been on a collision-course dating back to 1986, when my father, Robert Tepper, was breaking out in a big way with his song, No Easy Out. Sylvester Stallone would place No Easy Way Out in Rocky IV—and the rest, as they say, would be weight-room history. Athletes and iron-pumping fanatics around the world would come to live by the song, placing it in their pantheon of daily-prescribed motivational anthems. Happily for you, One Hit Wonder, other successes would follow for my father—successes that most anyone would deem respectable—but none on the scale of No Easy Way Out and therefore you could include him in your mocking, self-congratulatory, achievement-mad ranks. He was not amused.
As I grew older and became a musician myself, I came to resent you, One Hit Wonder. To be sure, my anger was based in a defensive feeling for my father. However, its roots also lay in your untenable perspective on creating hit-songs. For one thing, I came to realize just how fabulously rare it was for an artist to write and/or perform a hit. The recipe behind any hit but in particular one that becomes part of a culture, as my father’s did, remains unknown. No one has figured out just how to turn a song into a hit, and of course, many have spent a lifetime trying, only to realize that hits are the most mercurial of phenomenons. But to put oneself to the task, only to fulfill the mission, and then to encounter voices like yourself who put a person down for having done it just once? This behavior of yours is indefensible, not to mention, ludicrous.
Over time, One Hit Wonder, I became friendly with musicians from other countries who’d scored one hit here in the U.S. From them I learned not only of how difficult it was to make it in the States, but also of how you referred to them and other international recording artists as One Hit Wonders while in their home countries and often others as well they were still charting in the top-10.
Compelled to do some research on the subject, I investigated songs that VH1, who with their television program “The Greatest One Hit Wonders…”became your biggest co-conspirator, deemed the top three One Hit Wonders of all time. My findings were disturbing.
#3 – “Take On Me” – Aha – The song, which went all the way to #1 on the Billboard Hot 100, was released on the band’s 1985 release Hunting High and Low. But did you know, One Hit Wonder, that Aha followed with nine more studio albums and that all but two went to #1 in their native Norway, and that four rose to #2 on the UK charts and that throughout Europe and beyond the band amassed record sales numbering in the millions? Did you know, One Hit Wonder, that seven of their singles went to #1 in Norway. Seven!
#2 – “I Ran” – The Flock of Seagulls – The song remains a goliath, a cultural touchstone. But was it the band’s only hit? Absolutely not. Three more followed, including “Wishing (If I Had a Photograph of You),” which went to #26 on the Billboard Hot 100, and shot all the way to #1 in France. Did you hear that One Hit Wonder? #1 in France! 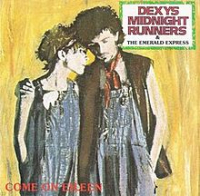 # 1 – “Come On Eileen” – Dexy’s Midnight Runners – This mega-hit also went to #1 on the Billboard Hot 100, and was their only breakout single in the U.S. But then the band had seven more top-20 songs in the UK, one of these songs, “Geno,” going all the way to #1. That's right, #1..in the UK.
Which leaves me to ask you, One Hit Wonder: Is it that a song must be #1 in the U.S. or not be thought of by you as a hit at all? Well, you wouldn’t be alone in this thinking—but you and anyone would be wrong. A hit is a hit, no matter where, and if you’re not convinced of this, speak with the fans of those very songs. They’ll make it very clear for you. I do hope you survive the experience.
Honestly, Devo at #14 with “Whip It?” Madness at #28 with “Our House?” XTC at #61 with “Dear God?” These are iconic bands, who helped shape pop music. Are you aware, though, that your name has a narrative built into it which says that the hit is the band's whole story? And do you not understand that by branding these groups with your red hot stake and ignoring their influence, you stamp out the public’s curiosity and inevitably do harm to the artist? If not, let this be a wake-up call to you.
Now finally, One Hit Wonder, in 2007, a song written by my old band the Natural History was covered by Spoon and turned into a hit. Not a #1, no—but the song, “Don’t You Evah” did chart, and continues to have a very good life some twelve years after its release. In fact, “Don’t You Evah” was included on Spoon’s “Best Of,” which was released in July on Matador Records. To have seen “Don’t You Evah” go from total obscurity—it was the fourth track on an unreleased second LP by the Natural History—to still chugging along after more than a decade, has shown me just how a hit song’s life defies all logic. But then if a recording artist has somehow cut through this nonsensical-ness and reached an audience—and a big audience, at that—what reason is there to layer on shame? Really, what shame in having just done it once anyway?
In time, I’ve seen my father become more comfortable with his place in your annals. He is happy with his hit. And yet I can’t help but think what if: yes, what if One Hit Wonder, we lived in a culture that saw the absurdity—and cruelty—of your position? What if we lifted a person up for having once had a hit? Yes, what if, One Hit Wonder, you didn’t exist at all? Maybe, soon enough, you won’t. Though your name is still widely used, I would like to think that anyone who reads this letter will think twice about speaking it ever again.
Regards, Julian Tepper
Julian Tepper’s third novel, Between the Records, is forthcoming in March 2020.  Website: www.juliantepper.com
Guest Post on 10/03/2019 in Indie Labels | Permalink | Comments (2)
Tags: hits, music, music business, musician, musicians, one hit wonder
Share on: