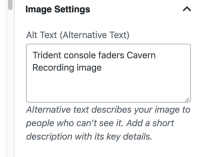 For any artist or band, having a high ranking is incredibly important to maintaining your online presence and being discoverable by your fans. Because of this every slight edge you can gain when it comes to SEO matters, including the implementation of image alt text.

If you’re an artist or a band with a website you really depend upon ranking high when someone searches for you. It’s not only embarrassing when you don’t wind up in the top 3 search listings, but you might as well not exist if you wind up on page 2 or worse. That’s why every little SEO edge counts, and one of the easiest to implement is to always use image Alt Text.

Also called “alt tags” and “alt descriptions,” alt text is the written copy that appears in place of an image on a webpage if the image fails to load on a user’s screen. This not only helps screen-reading tools describe images to visually impaired readers, but it also allows search engines to better crawl and rank your website.

But as with everything, there’s a right and wrong way to do it.

Before you can even be concerned with alt text, the name of your image file is important. Here’s how to create a name that works for SEO.

1. Describe the image in 1 to 5 words. Usually short is better, but make it descriptive so it’s easy to identify the image.

2. Include your keyword towards the start. If your image is of a Fender Strat, for instance, then try to start the image name with that phrase.

3. Use hyphens to separate words. To take the above image another step, the above image could be named “Fender-Strat-1963-Guitar Center.jpg.” That could mean that a 63 Strat was photographed at Guitar Center, but it’s descriptive enough to make it easy to find later. 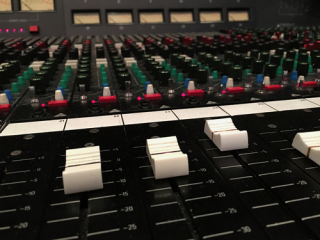 Each image has a place for alt text both on the image itself and in the theme of the website (which is most important). I bet if you visited most websites you’d probably find this section blank. A web designer with some SEO smarts knows that this is pretty important though, and will make sure that it’s always filled in. Here’s how to do it.

1. Put your keyword at the beginning of the phrase. If the website is about the history of Trident consoles, for instance, then the keyword for the image on the left would be “Trident console.”

NOTE: Be sure to place the word “image” at the end of the alt text description so that someone that’s visually impaired will understand that this is a graphic.

3. Remove conjunctions and connections (a/an, and, but, if, etc.). Once again, these are superfluous, use up characters, and aren’t read by the search engines.

4. Keep alt text to fewer than 125 characters. There’s only so many characters that the search engines will read, so describe the image in as few characters as possible.

Alt text doesn’t take that long to create, although it may take a bit of thought to get it right. It can be a big help in your search ranking though, so the time will definitely be well-spent.

For more SEO image tips, check out this chart.