Just days before Spotify's Monday earnings report, some label execs and Wall Street analysts are questioning if the steaming giant will ever be profitable, and if not, can it survive?

Spotify certainly looks like the big dog on the streaming block, and perhaps it really is, but some on Wall Street are beginning to think that the company is not all that its stock is cracked up to be. A recent article in Fortune looked inside the company and the state of streaming and found that the company was certainly in the right place at the right time when it started, but got a lot of help from a complacent music industry. 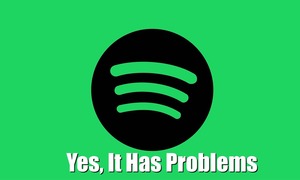 “The major labels kind of sat on their hands at the advent of streaming,” says Errol Kolosine, former head of the record label Astralwerks and a professor at New York University’s Clive Davis Institute of Recorded Music in the article. “The music industry went through a period of relative uncertainty, driven by not understanding the permanence of streaming. That reality has set in now.”

Maybe Being Public Isn’t That Great

And that sets the stage for where we are today, with Spotify having gone public for a huge valuation, and stockholders, investors, record labels, and artists wondering if there’s any “there” there.

The problem is that no matter the valuation, the company isn’t turning a profit. Even worse, it looks like it won’t be able to turn one soon either.

The reason is that the major labels have a virtual stranglehold on the company, as that’s where most of Spotify’s revenue goes. It can’t raise prices either, because that would be against the terms of its licensing agreements with the labels that hold the price at $9.99 a month. Even so, to raise prices would immediately carve off a piece of its market share to Apple Music and Amazon Music, deep-pocketed companies that don’t need to make a profit from music like Spotify does.

Are Podcasts The Answer?

In the article, a music industry exec close to the company stated that Spotify is “one fail away from becoming less relevant.”

What does this mean? The company has committed big-time to podcasts, thinking that it can replace some of the revenue now coming from music with high-margin non-music streaming audio product. It’s nice to dream, but I don’t see that happening, as the podcast market is already saturated, and very few have enough traction for advertising. I don’t see that getting better.

I think chances are good that the company is eventually acquired by a larger entity, and that day may come sooner than you think. The Chinese social and music giant Tencent already owns about 10%, so don’t be surprised to see its stake rise at some point (especially if the stock takes a serious fall).