Copyright violation remains an ever-present issue in the music business, affecting not only an artist's ability to make money, but also that of labels. Consequently, the RIAA annually drops a list of the top offenders. Here we look at who this year's guilty parties are.

Copyright is at the heart of every artist and songwriter’s ability to make money, so any time that’s violated it’s taking food out of their mouths. Of course, this applies to record labels as well, which is why the RIAA submits a list of “Notorious” copyright offenders every year to the United States Trade Representative’s office.

According to Billboard, these are the sites submitted by the RIAA: 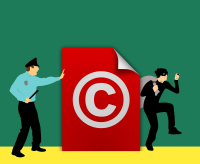 There’s one additional offender that the RIAA sites as not doing enough to combat piracy, and that’s the messaging app Telegram. The organization writes:

The organization also reports that a number of unauthorized “Greatest Hits” albums are on the rise in both CD and vinyl form (I saw a Beatles never-issued Greatest Hits vinyl album when I was last in Turkey).

The point of all this is that music copyright violations still exist. Even though streaming has caught the mainstream and in most cases has eliminated the desire for illegal music, piracy still doesn’t want to die and there are many copyright offenders doing everything they can to keep it alive.