The #1 Priority For All New Artists

Recent changes in the music industry have put the opportunities for success at a record high, with artists now able to monetize their creative output almost immediately. Whatever kind of artist you seek to be, however, your top priority should be growth.

Every artist has a unique journey to success in the music industry, but they should all start with the same goal.

Now is the best time ever to start a music career. The opportunities for exposure and success are at an all-time high, and virtually everyone can begin making money for their creative output as soon as it’s uploaded to the internet. Artists have never been as empowered to express themselves as they are right now, and that has made music as a whole far more interesting.

But regardless of who you are and the kind of music you seek to create, the goal of every musician starting today should be the same: Growth.

Jesse Cannon, music producer and author of numerous books geared at helping musicians succeed, says all new artists should prioritize growth until they have at least 20,000 monthly listeners on Spotify.

Why Spotify? If you asked a few years back, Cannon would have said the goal growth on Facebook or Twitter. Online metrics matter significantly in the industry, and having a sizable audience on any platform is a clear sign to the industry at large that people care about what you’re doing.

These days, however, Spotify is the most sought-after platform for strong performance stats. After all, the streaming giant is where digital engagement transforms into money. Every stream on Spotify counts towards an artist’s income. When labels, management, and the like are looking for new talent, Spotify is the place most turn to gauge an artist’s value. 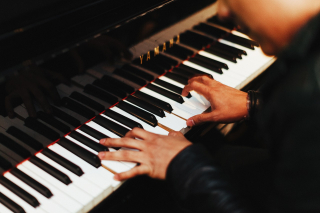 When asked for more information, Cannon said 20,000 was indicative of an artist having “buzz beyond those of us who talk about [music] all day.” Meaning, an artist with a large Spotify following confirms the general public has discovered and taken an interest in their music. There are many artists that critics and industry professionals love who may never reach a following that large, so it’s important — from a business standpoint — to know music consumers are embracing someone.

Cannon further suggested that artists should avoid releasing or working on albums until they hit the 20,000 listener goal. Until that time, Cannon recommends releasing singles regularly. Consistently giving people a new reason to care or give you a chance is a proven tactic for developing an audience. Until people are willing to wait for something that could take a long time to complete, stick with singles as a means of showcasing your talent.

Careers are built on fans. In the age of the internet, engaging with listeners is incredibly easy. You can tweet at people, post to Facebook, share stories on Instagram, create videos for YouTube, and maintain a mailing list, among other things, without spending a dime. Growth on any platform is excellent, but growth on Spotify makes a difference that other digital communities cannot. Focus your efforts, build a community, and in time you will have the audience needed to support a full-time career.