Why Improvisation Is Great For Seasoned Musicians, As Well As Those Just Beginning To Learn Music

When performing on stage or learning a new piece of music, musicians typically view their playing one of two ways, good or poor. Unfortunately, this binary way of look at music can do real harm to our growth as an artist, harm which can be rectified through the power of innovation.

When we’re performing on stage, learning a new instrument, or trying to nail down a tough musical passage, it’s always easy to view music as something rigid and unforgiving. We either play well or we don’t.

Whether that binary mind game was drilled into our heads by a childhood music teacher or developed out in the world of music on our own, that notion can definitely scar our sense of adventure in music. The idea that music should only be one concrete thing is not only inaccurate, but it can keep us from becoming more creative and better acquainted with our craft. Improvisation is the remedy to falling prey to the dogmas surrounding music, whether we’re completely new to it or are prone to getting wedged in creative ruts after years of playing experience. Here’s why.

The magic of musical improvisation.

If you think about it, performances almost always involve a great deal of prediction and planning: writing or picking the music, rehearsing and learning the music, showing others how to play, preparing for a concert or recording in other ways, taking care of your body and your instrument, etc. It’s crucial that we get organized and focused if we want our performances to be well-received.

But the catch here, is that when things become too static, too predictable and over-prepared, they lean away from the enjoyment factor of just blowing your horn and having a good time. Too much structure can even hinder the learning process in some cases if you’re trying to learn a new instrument or get better at something. If you approach music as an exclusively rigid, rule-dominated endeavor, you’re not really hearing some of the best parts of your song.

Improvisation allows musicians to work in spaces they’re not used to, where right and wrong judgements, plans, and attachments don’t have to inform the music that’s being played for once. Improvised music can sound like anything, meaning there are limitless possibilities for what can be created and no required standards to judge ideas and approaches by; and certainly not whether a note is right or wrong.

Rather than learning or creating with a strict plan, improvisation literally allows musicians to make things up as they go along. It’s a powerful alternative to the conventional ways most of us approach music-making.

What science reveals about improvisation.

A fascinating piece recently published in the Washington Post profiles research that studied the brains of jazz pianists. Scientists had the musicians lie down inside an MRI machine while playing custom-made keyboards. The results were incredible. Brain scans showed that the musician’s brains were visibly organized in new ways that allowed for “sudden associations and free insights.” 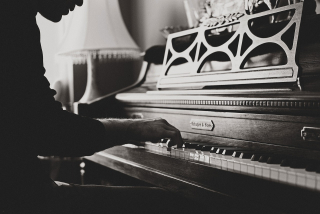 When we drop everything and explore new, uncharted music, our brains reconfigure themselves by sending resources to different places compared to when we play music we’re familiar with. Another study published in Science Daily found that experienced musical improvisers were markedly better at detecting interchangeable chords than inexperienced improvisers. This means that improvisation can not only improve our ears, but it’s a skill that can be developed with practice.

How winging it can help non-musicians learn music.

Improvisation can be a powerful introductory tool for those learning to make music for the first time. And believe it or not, people new to music have something incredible at their fingertips that seasoned musicians don’t: Curiosity.

Inexperienced musicians don’t have the pressure of expectation or the baggage of experience to contend with, letting them create whatever they want as long as they have enough technique to produce sounds on their instruments. Combined with basic music-making skills, those new to music can learn a great deal about their instruments and their own musicality through improvisational expression.

But sadly, improvisation usually isn’t an educational priority in most conventional music teaching settings. A harmful idea many educators and music students adopt is that creating music in the moment isn’t as valuable as going through the motions with exercises and learning pieces. For many musicians, the result of this thinking shows up later on in their playing through a lack of creativity and deep fear of playing anything not written on sheet music. Today’s music educators have a responsibility to their students to give them a broader picture of what music is and can be by leaving room for improvisation in their lessons.

When improvisation is paired with rudimentary music skills, musical growth and exploration are sure to follow. This applies whether you’re learning an instrument for the first time or you’ve been making music for decades.