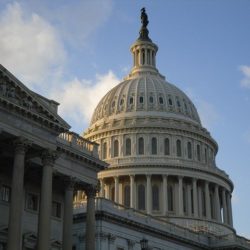 A new bill introduced into the US Congress would require broadcast radio to pay fair market value for the music they use.

Unlike almost every country in the world, only songwriters are paid for U.S. radio performances, with no compensation going to musicians and other performers.

“The United States in an outlier in the world for not requiring broadcast radio to pay artist when playing their music, while requiring satellite and internet radio to pay,”  Nadler said in a statement. “This is unfair to both artists and music providers. I’m proud to sponsor the Ask Musician For Music Act of 2019 which would give artists and copyright owners the right to make a choice to allow AM/FM radio to use their work for free or to seek compensation for their work. The bill would also allow them to negotiate rates with broadcasters in exchange for permission for it to be aired. This is what music creators want and deserve.”

The music industry immediately signaled support of the bill.

“We applaud Chairman Nadler and Senator Blackburn for their leadership in introducing bipartisan, bicameral legislation to ensure creators receive fair market value for their music on all platforms,” said Mitch Glazier, Chairman and CEO of the Recording Industry Association of America (RIAA). “By requiring broadcasters to get permission from music creators to use their music in the same way broadcasters are entitled to give permission for the use of their signal – the AM/FM Act addresses inequities in law that should be fixed.”

“Introducing the AM/FM Act on the same day the House Judiciary Committee marked up the Satellite Television Community Protection and Promotion Act of 2019 (the “STCPP Act”) underscores a core principle: both broadcasters and creators deserve the same rights when it comes to the use of their property,” he continued. “The current state of the law granting broadcasters that right while denying it to creators is unjust and skews the market. We look forward to working with Chairman Nadler, Senator Blackburn and the entire music community to pass this bill.”

“Songwriters and music publishers support the AM-FM Act because music has value, and creators should be able to decide what is best with their intellectual property,” said National Music Publishers Association President and CEO David Israelite in a statement. “For too long broadcasters have benefited from the lack of a sound recording performance right, as well as antiquated consent decrees that allow them to pay songwriters less than fair market value.”

The National Association Of Broadcasters quickly opposed the bill.

“NAB opposes the AM-FM Act, which could decimate the economics of America’s hometown radio stations that have launched the careers of countless musicians and exposed legacy artists to a new generation of listeners,” NAB President and CEO Gordon Smith said in a statement.