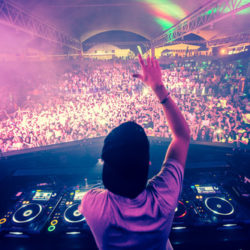 It’s no secret that a life of touring and performing can take its toll on a person and, if not done ethically and responsibly, can have devastating effects. Here we look at how improved ethical leadership and decision making can help keep improve artists’ mental health and enhance their performance.

“If [Avicii] had a professional artist company, he would be alive today. When greed and stupidity go hand in hand, anything can happen, especially unfortunate things.”

On the 20th April 2018, the music world were shocked to hear of the passing of one of the biggest dance music producers and DJs in the world, Tim Bergling – AKA Avicii. As a result of his relentless tour schedule and mental health issues, Avicii retired from touring aged 26 and sadly took his own life a couple of years later. Following his passing, numerous examples within the press documented the contribution of both his management and booking agent in the development of his mental health issues, burnout and ultimately his death.

A key player in the devastating story of Avicii is the role of his manager, Arash ‘Ash’ Pournouri. Having worked with Bergling since he was 16, Pournouri reportedly owned 50 percent rights to all of Avicii’s writing and production whilst profiting from 20 percent of his performance fees. With reported profits of $20 million a year, Pournouri was making a fortune from Avicii’s success. However, this came at a cost.

Over his 8 year career, Avicii performed 813 shows with 320 of these being in 2013 alone. During his time on the road, Bergling started to struggle with his mental and physical health developing a dependence on alcohol to keep up with the fast paced lifestyle pushing him to breaking point. This landed him in hospital being treated for pancreatitis. Following his illness and struggles with his mental health, Avicii ‘begged’ for the postponement of his tour to his management and booking agent as “it will kill him” yet received little sympathy with replies telling him that “he must honour his commitments”.

There is no doubt that the leaders in Avicii’s backroom team prioritized profit over the health and lifestyle of their client. Sadly, this is not the only high-profile name to have similar outcomes.

Despite an extreme example, it shocked the music world and was a “wake up call” for the industry [3]. It highlights the integral importance and responsibility of leaders, within the music industry, to behave in ethically appropriate ways to enhance their artists performance, protect their psychological well-being and longevity. Therefore, what can be learnt from the existing research into ethical leadership?

Goals of this blog:

What is Ethical Leadership?

Every day, ethical morals and principles govern our way of life. By choosing to do what we feel is right through the effortful consideration of the welfare of others [9], ethical principles and behaviours underpin the societies and communities in which we all work and live. Defined as “moral principles and values that govern a person’s behaviour or the conducting of an activity”, many ethics are fundamentally universal.

Within our communities, there are leaders. Ethical Leadership, as a leadership style, promotes moral and ethical conduct through the leaders personal actions, relationships and role modelling to their followers and those around them [5]. Underpinned by compassion, love, social responsibility and integrity [7], an ethical leaders job is, therefore, to “direct groups of individuals towards moral common goals in the best interest of individuals and the wider society”[6].

Despite ethical leadership being identified as a leadership style, creating an ethical climate and leading ethically is a critical dimension and component of effective leadership [1, 8]. Through the setting of moral standards within the environment in which they are leading, ethics must be “at the heart of leadership” and have the power to transform environments and the individuals within them.

Who are the leaders within the music industry?

With leadership a focus on directing a vision, and management a focus on the co-ordination of achieving a goal [4], both of these definitions and job roles have considerable overlap and similarities [4].  Within the music industry, many individuals such as management, booking agents, parents, and A&R, therefore all play roles in both leading and managing artists. For leaders within the music industry it is integral, including the artist, to lead and behave with ethical morals and principles.

What are the characteristics of ethical leaders?

Leadership models posit leaders and managers attitudes are at the heart of leadership [4]. It is key that an ethical leaders managerial behaviours in the workplace are, therefore, underpinned by the leaders moral identity and principles in everyday life. Personal characteristics such as being trustworthy, honest, respectful, fair and humanitarian are key principles underpinning an ethical leader [9]. As an outcome, these attitudes will be modelled through the leaders behaviours.

Based on these key attitudes and characteristics, an ethical leader will facilitate an ethical climate and set the moral standards within the organisation and environment through the modelling of ethical behaviours [12]. Ethical Leaders are:

An ethical leader therefore leads more through actions than words by facilitating an environment based around the health and well-being of its employees.

In addition, one of the defining roles of a leader is to make decisions. As there are few managerial decisions free of ethical components [12], ethical dilemmas where different values, beliefs and interests are in conflict are a constant issue faced and tackled by leaders. For instance, Avicii’s manager faced an ethical dilemma when Avicii became ill and wanted to cancel his tour. If leading ethically, Avicii’s manager should have prioritised Avicii’s physical and mental health yet put financial profit before his clients health. Therefore, the ethical leader will put the greater good of society and their employees before personal and financial gains.

What are the performance outcomes of ethical leadership and management?

Ethical leadership has many positive outcomes on the psychological well-being and the performance of their followers. Within the literature, the ability to optimally perform is based on the individuals ability to function successfully within their environment. Thus, by ethically leading, optimal performance is enhanced and fostered in their followers through an ethical environment and optimal psychological well-being.

Key outcomes of ethical leadership are:

Thus, ethical leadership aims at improving performance through the long term benefits upon the psychological health and subjective well-being of those around them.

So how does this apply to the music industry?

It is integral to understand the context of the music industry before applying this research to the field. First of all, the relationship between the artist and music industry is a transactional relationship with both parties exploiting each-others resources (e.g. using studios of record labels in return for owning the masters of the music) [13]. Both parties are subsequently required and under pressure to perform as the music business is based upon figures [13]. Leaders within the music industry are, therefore, in a tricky situation to strike a balance between the need to generate revenue whilst having an obligation for the welfare of the musicians.

Musician’s due to the nature of their job are also at risk of developing numerous issues with their well-being. For instance, musicians face financial issues (e.g. lack of full time employment), develop maladaptive coping strategies to stress (drug and alcohol dependencies – as we’ve seen with Avicii) and vulnerability over their career (the potential of getting dropped by record company). As a result, musicians have been found to be at risk of burnout, conflict issues, isolation and poor emotional regulation [10]. Thus if leaders develop an ethical approach to their artists, the negative consequences of the industry can be reduced. In turn, this will subsequently boost their performance through improvements in their psychological well-being.

It is important to note that the majority of ethical leadership research has been conducted within organisational settings. As managers and leaders work within a multidisciplinary business team, they make key decisions from a position of power with both the best interest of themselves and their artists. Therefore, the evidence-base in organisational setting can be translated into the music business.

“Knowing yourself, is the beginning of all wisdom”

It would be expected that whilst reading this blog, you have began to critically self-evaluate on your ethical practise as a leader. This is integral as self-awareness is the key foundation of performance leadership [4]. As stated previously, ethical leadership is not just a leadership style but also a key dimension to any leadership approach. All leaders must, therefore, question if: they are adhering to ethical values? How can they can become more ethical leaders?

By appointing the correct people, role-modelling ethical behaviours, increasing ethical awareness and promoting ethical values, a strong ethical climate will be fostered. This is critical as an ethical climate has been identified as the one of the biggest contributors to performance and well-being [12]. As an outcome, the long-term performance of your artists will be enhanced.

With leadership a focus on directing a vision, and management focus on the co-ordination of achieving a goal [4], infusing and setting ethical standards into goal setting procedures is key for an ethical leadership [12].

By not giving people full control over their decisions, the goals set within the organisation set ethical boundaries. By holding the individuals accountable for the process of how they achieved their outcomes and goals, followers will be obliged to follow ethical standards and procedures. For instance, rather than focusing on the outcome (revenue from gigs), you are also held accountable for the way in which this goal was achieved.

The leader becomes aware of the moral dilemma of the situation

Avicii is struggling with his health and wants to cancel his tour.

This is where you decide whether the initial potential actions are ethical or not.

By making him continue, he could potentially get worse

This is where you select the moral alternative over your other alternatives. These alternatives are generated through moral imagination and the leaders moral principles. Does your decision benefit the greater good and the individual?

This is where Avicii’s management chose to push him to continue touring despite begging to stop. The correct intention would be decide to postpone the tour or cancel the shows despite the loss in revenue

This is the engagement in the ethical behaviour