Beginning on January 1st of 2021, the rollout of a new blanket mechanical license as laid out in the Music Modernization Act will begin. Here is what ir means for artists and the industry as a whole.

By Emmanuel Legrand of the Legrand Network

Starting on January 1, 2021, the provision in the Music Modernisation Act of 2018 (MMA) establishing a new blanket mechanical license covering the use of musical works in the US by eligible digital audio services will come into force. It will replace the previous system which required digital services to obtain licenses from all rights holders to operate.

From Jan.1 too, the Mechanical Licensing Collective (The MLC) will start operating officially to administer the blanket license. It will work alongside the Digital Licensee Coordinator (DLC), which regroups the digital audio services that will be operating under the new blanket license.

The MLC said that the arrival of this new blanket licensing system “will mark the beginning of a new era of greater efficiency and transparency in mechanical licensing for musical works in the United States.” The organisation has been building up throughout 2020, and operating mostly virtually due to the pandemic.

Reaching out to DSPs

Based in Nashville, it will start issuing licenses to digital service providers and start collecting royalties from the use of musical works by audio services. The MLC has been engaged two main initiatives: reaching out to the music publishing community and self-administered songwriters, to ensure that their works were entered in the society’s database; and reaching out to DSPs to ensure that they understand the new framework and make the necessary changes from Jan. 1, 2021.

The MLC’s DSP outreach efforts have been led by Richard Thompson (Chief Information Officer), Abel Sayago (DSP Onboarding Consultant), Joya Carmichael (Head of Operations) and consultant Vickie Nauman. Among the benefits for DSPs that opt in for the blanket license is the protection from liability that would arise from using works that were not properly licensed. DSPs that wish to operate under the blanket license must submit their Notice of License to The MLC using the form provided by The MLC no later than February 15, 2021.

A service that elected not to secure the blanket would still have to abide by a number of reporting obligations. By US law, DSPs that provide more than 5,000 unique works to US consumers via interactive streaming or downloads on any given day in a given month or earn more than $50,000 a month (or $500,000 over 12 months) from such activities “must report their usage data to The MLC, whether or not they choose to obtain the new blanket license.”

“The MLC has engaged with more than 50 DSPs so far, both to make sure they aware of their new legal responsibilities and to preview the resources we’ve created for them, including reporting specifications and the templates for notices to The MLC,” said The MLC CEO Kris Ahrend (pictured, below), who added that these efforts “should ensure that currently-operating DSPs are in a position to begin operating under the new blanket license starting on January 1, 2021.”

Garrett Levin, representative for DLC, and CEO of DiMA, which represents digital services, said the DLC has also conducted its own outreach activities. “As we approach this watershed moment in digital music licensing, DLC has spent countless hours working with DSPs to ensure they understand and are able to successfully navigate this new licensing regime. Through individual outreach sessions, educational programming and collaborative outreach coordinated with The MLC and Copyright Office, we have laid the groundwork for The MLC to efficiently and effectively fulfill its mandate.”

On the data side, The MLC has been building from the database of HFA, which has been picked a the main data provider. In parallel, The MLC has invited music publishers and self-administered songwriters to enter and check their data in the database. The database will also include public domain works.

The MLC recently conducted a webinar to explain how large owners of compositions can access bulk data, as required by the MMA, which specifies that The MLC has to make available its database in “bulk, machine-readable format through a widely available software.”

The MLC CIO Richard Thompson said the files would include data on musical works, data on parties (creators of musical works) and representatives (publishers, administrators or domestic and international CMOs), data on sound recording (and their link to musical works), data of products/releases (and their links to sound recordings). Not included in the package is payment information, such as bank details and payments made. “We are talking about data on catalogue rather than confidential information,” said Thompson.

The MLC has started to work in November 2019 with global music data agency DDEX, and went through a collaborative process to elaborate a standard applicable to The MLC data. “About 30 organizations have participated to develop the best standard,” said Thompson. The process was finalized in November and DDEX has issued a new standard named BWARM (Bulk Communication of Works And Recording Metadata), that sits alongside other DDEX standards as well as borrowing from them “quite heavily.” 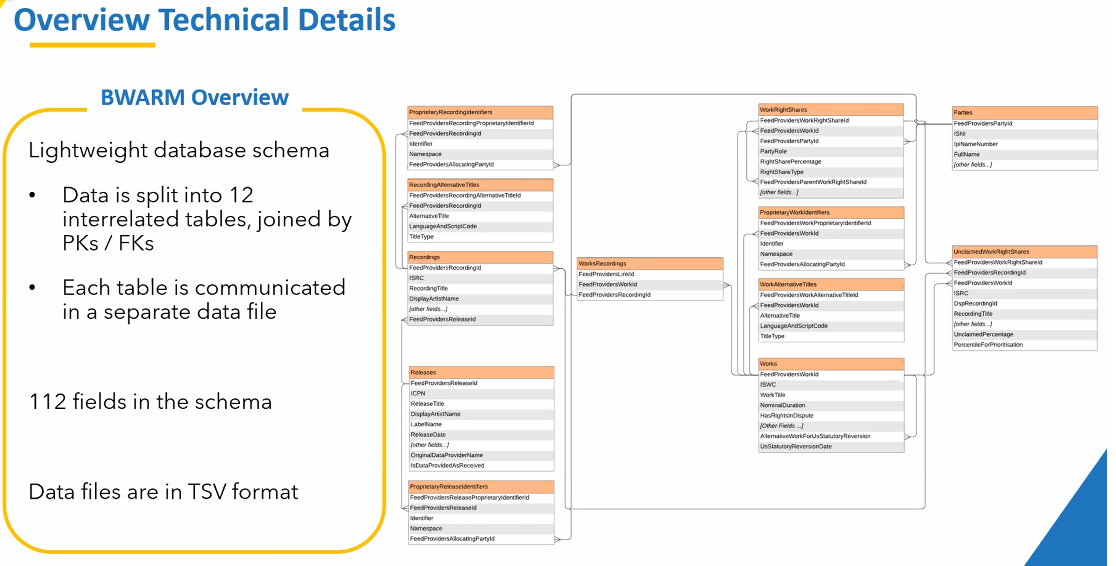 The bulk database is available to vendors and DSPs free of charge, and will be available to other parties at a fee “that does not exceed the marginal cost of providing the database,” said Thompson. A one-time set-up fee of $100 allows to download the database for one month, and if users want continuous access, it will cost $25 a month, and the subscription can be canceled any time. “It is not a money making exercise,” said Thompson. “It is designed to cover marginal costs and we will agree that it is pretty low, at $300 a year if want to access that data.” He added that for the moment, the pricing model for accessing the data through the API, which will happen in 2021, will be different but has not been set yet.

How it works to access the file? The MLC will take a “snapshot” of the data once a week and make available for download, via a log in on MLC site. “The first snapshot will be available early in January,” said Thompson, who indicated that the size of the file (25G) would require other software than Excel. Each snapshot contains all the data, including data pertaining to unclaimed works, and it cannot be tailored to specific needs.

The webminar gave a sense of the complexity of the data collected. Datasets contain all rights holders and their percentage of ownership and multiple links between datasets. Musical works listed in the database come from MLC members (publishers, administrators, songwriters or international CMOs) as well as from DSPs, which will provide The MLC with monthly reports of all the works used on the services during the period. “That’s a lot of sound recordings and the vast majority will come from that,” said Thompson.

Raphael Amselli, MLC technical consultant for data, outlined the various datasets that will be part of the database. The data is split in 12 tables, with each table communicated in separate data files. “All the data is separated in tables and everything is interlinked,” said Amselli. “We have 112 data fields, so that’s a lot of data points.”

A wide range of fields

The data will feature the following fields:

> Data on Parties:
This relates to songwriters, who are an “essential component,” publishers, administrators, CMOs that participate in collecting and representing the musical works. Parties are interlinked to all parts of the scheme, every core component. Fields include: Party name(s), Party identifiers, Party contact information. 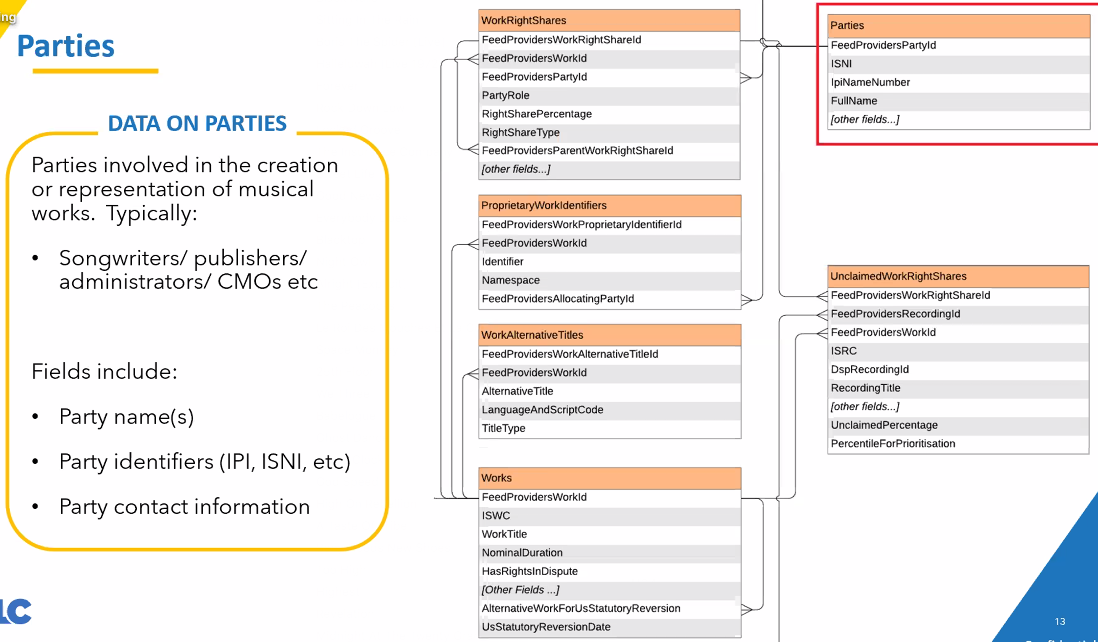 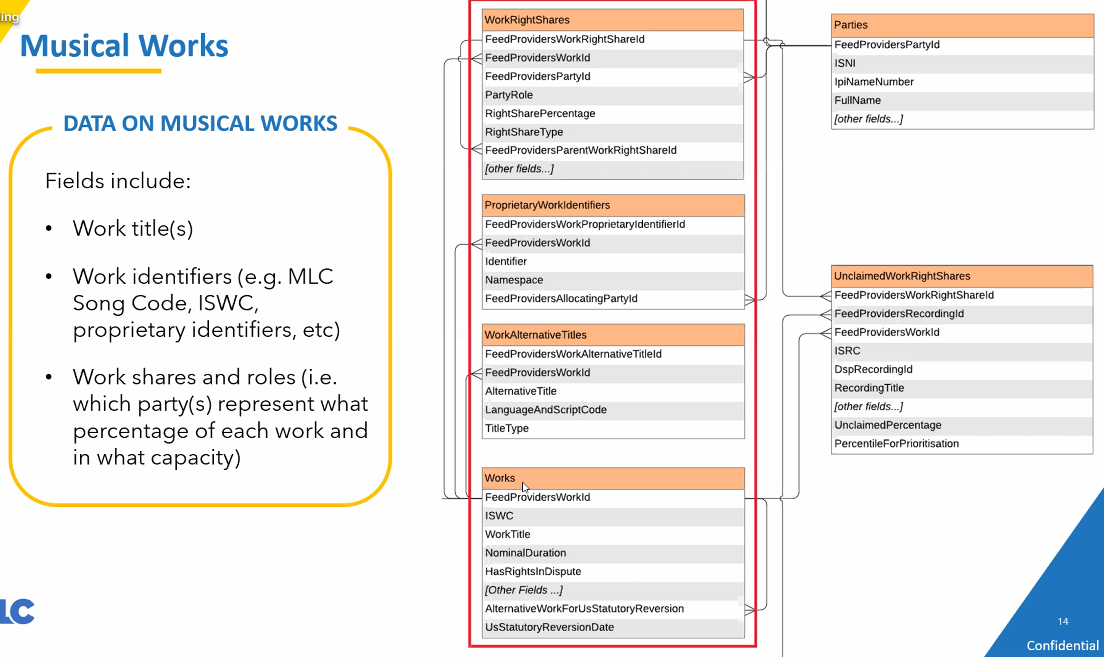 > Data on products:
Products are linked to a recording. Fields include: Product titles, Display artists and Product identifiers (ICPN, such as bar codes).

> Data on unmatched and unclaimed works:
This segment will include works for which partial or full data is not available.